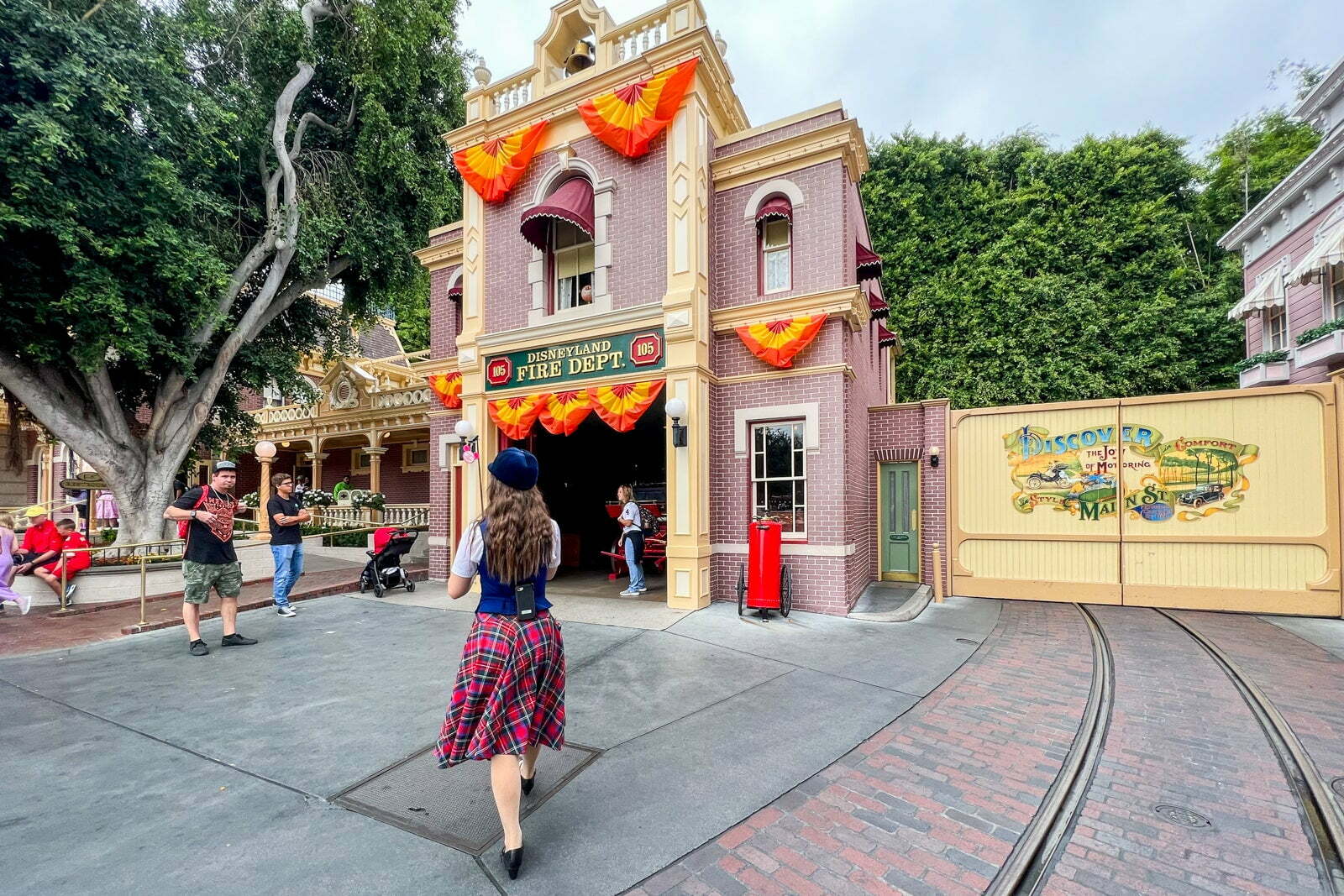 While some of the millions of guests who file into the gates of Disneyland each year know little about the park beyond its rides, others are quite familiar with the extra touches hidden in plain sight. For example, some are aware that Walt Disney had an apartment located right on Main Street USA. They may also know that a lamp stays on in the window of that apartment as a symbol of the famous animator’s still-present legacy in the parks.

What even devoted visitors might not realize is that this historical space is now accessible via a new tour. As a guest on Walt’s Main Street Story Tour, you’ll step inside Disney’s apartment and learn all about the animator and his life at Disneyland in the 1950s.

Unlike Disney VIP tours, you won’t need to shell out thousands of dollars to peek into Disney’s apartment. All that’s required is a $160 per person tour fee and proof of a valid park reservation and admission for the same day. Advance bookings are not necessary, though they’re highly recommended and can be made ahead of time (up to 60 days before your visit).

Being the Disney history enthusiast that I am, I have always been curious to see what Disney’s apartment looked like. So, when I learned that a recent trip to Disneyland would occur shortly after the launch of Walt’s Main Street Story Tour, I couldn’t resist a chance to walk inside the animator’s former home.

Here’s what Walt’s Main Street Story Tour was like — and whether the new experience is worth the price.

Related: Disneyland vs. Disney World: Which is the better park to visit?

An overview of Walt Disney’s apartment

As you may expect, the main draw of Walt’s Main Street Story Tour is to see the former home of Walt Disney. Added in the 1950s while Disneyland was under construction, the apartment served as a convenient spot from which Disney could keep tabs on the park’s progress when he was not busy making some of Walt Disney Studios’ most iconic movies. By locating the apartment directly inside the park, Disney could reduce his time spent commuting and more efficiently tend to his many projects.

Built above Disneyland’s fire station on Main Street USA, Disney’s in-park abode was designed to look and feel different from his main residence. It featured a Victorian-inspired theme with tufted furnishings, ornate white columns, a mix of antiques and bold red carpet and drapes.

While it was originally created as a place for Disney to stay for work, it was frequently used by his family during Disneyland visits after the park opened in 1955, as this 1962 image shows. In this photo, Disney and his wife, Lillian Disney, are enjoying the space with three of their grandchildren.

Despite the small size of the apartment — which I immediately noticed when I visited — the 500-square-foot abode served its purpose, offering only a living room, a kitchen, a bathroom and a dressing room. As the story goes, due to the lack of a proper bed, Walt and Lillian slept on couches on opposite sides of the main room during their stays at the property.

Related: Where to stay at Disneyland: On vs. off-property hotel comparisons

To start the tour, head to the park entrance end of Main Street USA. This is where you’ll find a tucked away area with a little gazebo office called “Tour Gardens.” 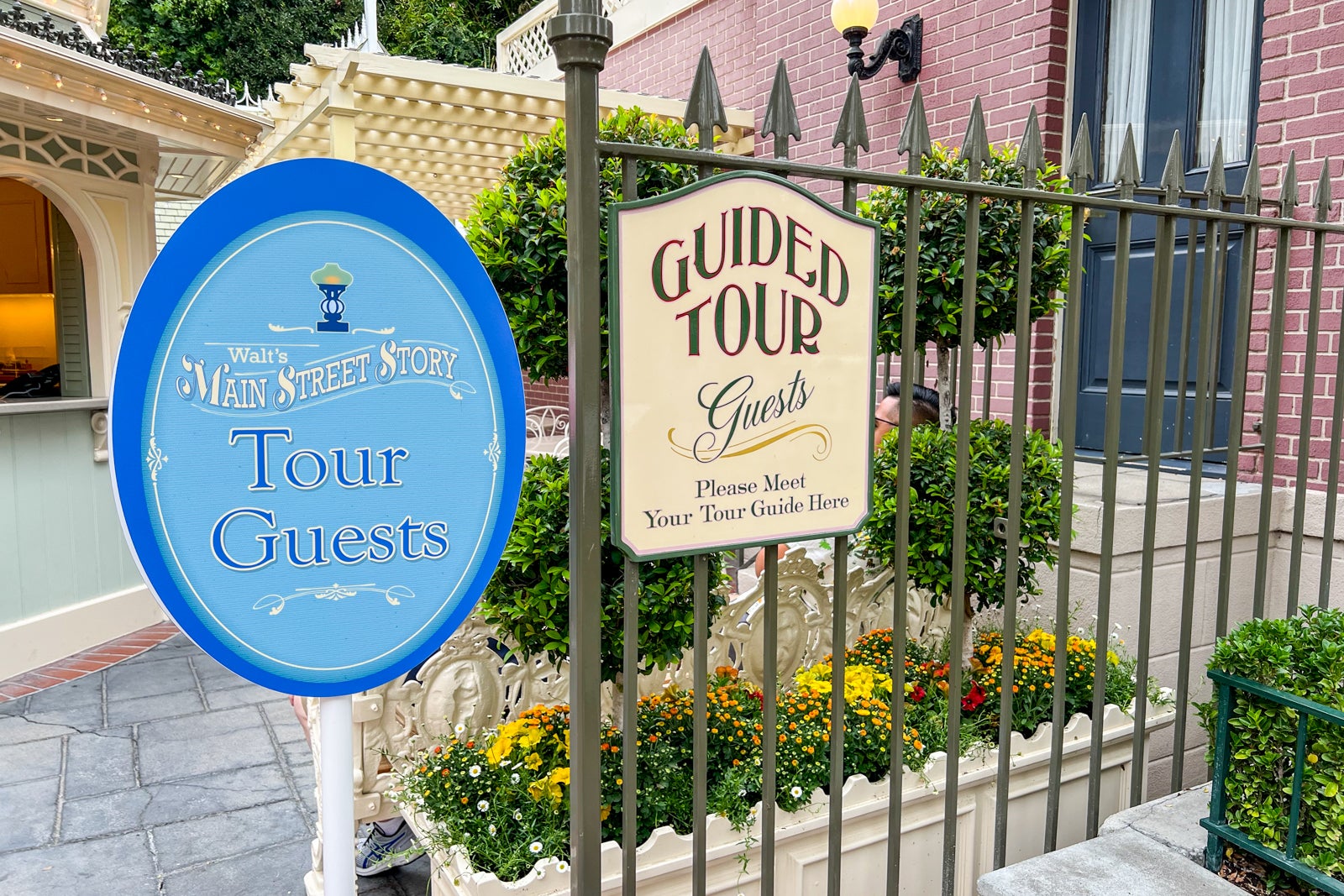 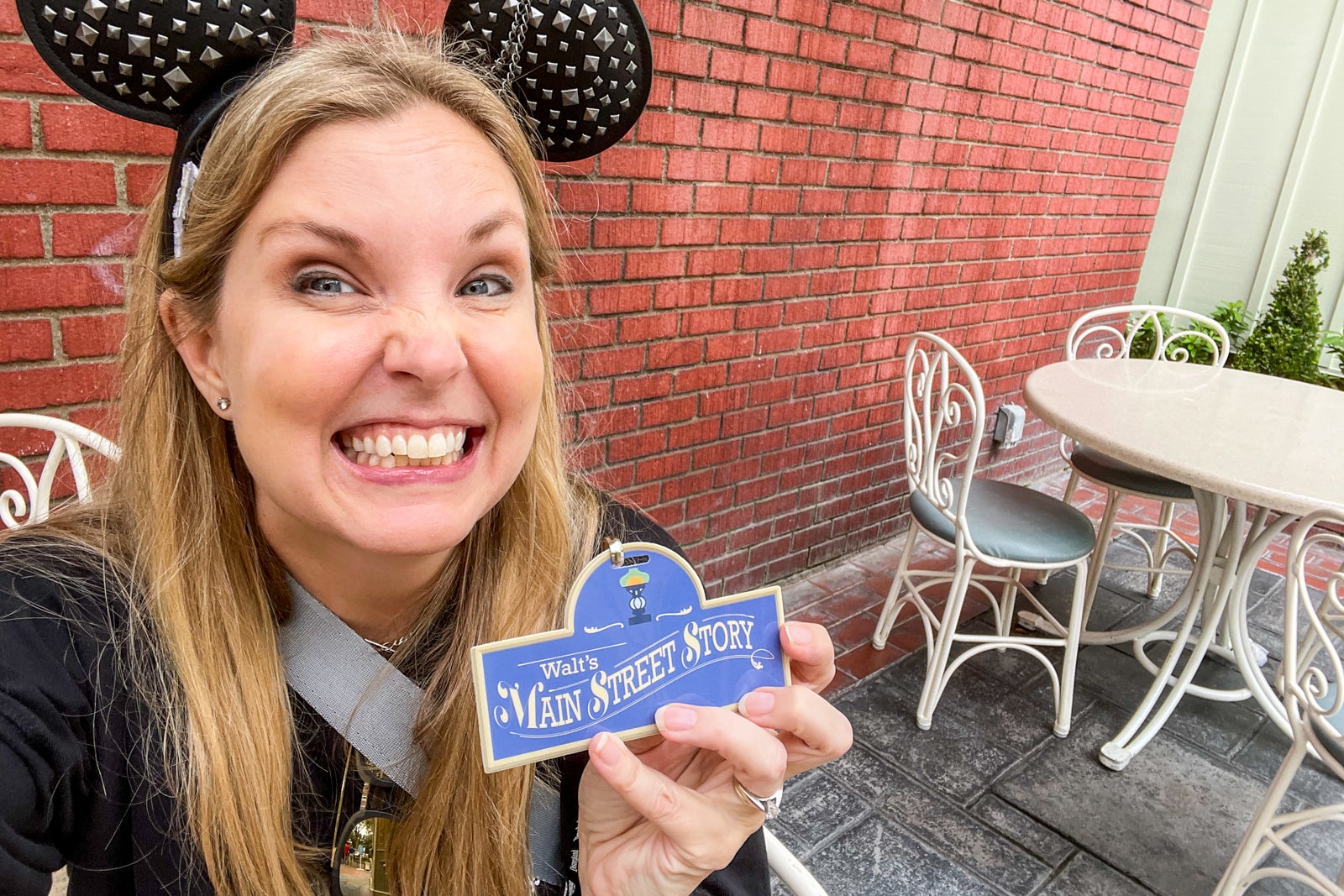 When I arrived to check in for the tour, I was asked about my snack preferences before being given both a neck tag and a listening device so I could better hear the tour guide’s insights while strolling around Main Street.

Our tour began with a 10-minute visit to the Disney Gallery, where a map of what Disneyland looked like on opening day was on display. It was here that we learned more about what inspired the design of Main Street USA.

We then walked around Main Street for about 10 minutes, getting some tidbits about the thoroughfare’s design.

Once we were roughly 25 minutes into the tour, we made our way to the firehouse. By this point, the anticipation was building, as the eight of us on the tour knew that this likely meant we were minutes away from walking backstage, going up the staircase and emerging in Disney’s iconic apartment. With each step, our anticipation grew even more.

Related: The best restaurants at Disneyland

Upon entering the apartment, we proceeded to spend between 30 and 40 minutes looking at everything in awe while learning about all that lay inside (under watchful eyes, of course).

Much to my disappointment, tourgoers are not permitted to take photos while in the apartment and must keep all of their belongings on one side of the wall near the entrance to ensure no pictures are being secretly snapped. However, a Disney PhotoPass photographer does appear about 20 minutes into your time in the apartment to take some photos. The cost of the tour covers all digital images you receive from this service via your Disneyland app.

To wrap up the tour, we ventured out onto the apartment’s patio for 20 minutes. This is where you’re given a specially-themed, lemon-flavored cookie and a soda of your choice to enjoy as you listen to the sounds of Main Street down below.

A parade happened to go by while we were up there, so the scene was particularly lively during our visit. For just a brief moment as my eyes were closed, I felt like I could fully imagine what Disney experienced as he watched passersby from that perch.

Is the tour inside Walt Disney’s apartment worth it?

As a die-hard Disney fanatic who enjoys learning all about Walt Disney and the history of the parks, I didn’t hesitate to spend $160 to go inside this apartment. The snack break and additional history provided around Main Street were merely added bonuses as far as I was concerned.

That said, not everyone will feel the same as me. If $160 seems like a good trade to you to gain access to an exclusive part of Disneyland, then odds are you’ll enjoy the tour as much as I did. Between the insider facts gleaned during the tour and the keepsake photos provided by the Disney PhotoPass photographer, there were many moments from the experience that I’ll cherish forever.

However, if you’re not raising a budding Disney historian, then this tour likely will not be appropriate or entertaining enough for anyone younger than 12. The same could even be said for older tweens and teens, depending on how fascinated they are with Disney history. I did not bring my kids on the tour as it wouldn’t have been a good use of money or their time in the park to do so, though I hope that changes once they’re a little older.

If there’s anything about the tour I wish was different, it’s that it was a little long. By cutting some of the snack time or skipping the part about Main Street USA to bring the 90-minute tour time down to one hour, more time could be spent on other interesting aspects of the park’s history, such as how some of the opening day rides came to be. In a perfect world, I’d love for the tour to be structured like Disney’s Keys to the Kingdom Tour at Disney World, but now I’m nitpicking.

So is Walt’s Main Street Story Tour absolutely worth signing up for? Ultimately, that will depend on your personal interests and budget.

If you or any of your park companions are not that into Disney history or would rather spend your money elsewhere, then you’ll likely want to skip this tour. There’s no harm in moving right past the illuminated lamp above the Main Street fire station so you can enjoy more time in Galaxy’s Edge or an extra ride on your favorite modern-day Disneyland attraction.

Read on for more Disneyland planning: