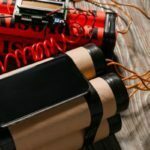 A female passenger on a recent Florida flight found herself in a bit of a predicament after defending two fellow passengers who were removed because of a bomb threat. She herself was removed from the flight.