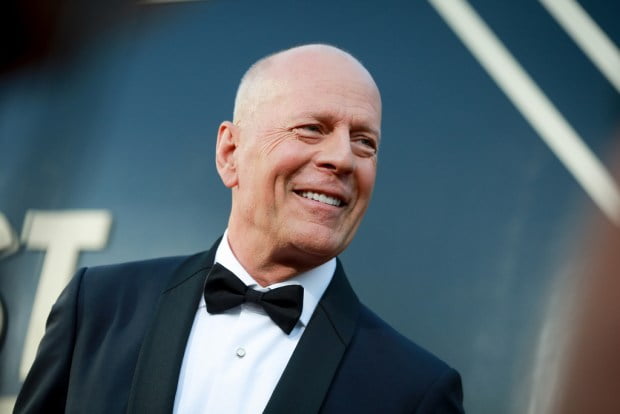 Matthew Perry appears eager to live up to the Alcoholics Anonymous credo of “rigorous honesty,” while also selling some books, but he’s come under fire for perhaps indulging in too much “rigorous honesty” about other famous people.

The “Friends” star, 18 months into recovery and promoting his memoir, “Friends, Lovers, and the Big Terrible Thing,” has had to apologize for essentially saying it’s not right that Keanu Reeves is still alive. He also left Valerie Bertinelli “mortified” when he revealed he once had a big crush on the actress and made out with her at her home as her then-husband, rocker Eddie Van Halen, lay passed out from drinking 10 feet away.

Now, it’s been reported that Perry dishes on Bruce Willis and his hard-partying ways in his new memoir. As with his story about Reeves or Bertinelli, Perry uses a story about Willis’ raucous behavior during a film production to share how sad, desperate and addicted Perry was, according to a Daily Mail report about the book.

Perry wrote how Willis hosted all-night parties when they co-starred in the 2000 film, “The Whole Nine Yards,” the Daily Mail reported. The ‘Die Hard’ star rented out a floor at the Montreal hotel they were staying at, called it Club Z, and partied all night with the cast, but still managing to show up for work at 6 a.m. the following day, “bright and early.”

To keep up with Willis, Perry revealed that he bought 100 Xanax pills to bring with him to Montreal, where the movie was being filmed. He “desperately” wanted to be friends with Willis, a superstar at the height of his fame, and he wanted Willis to think he could keep up.

Perry wrote about how “The Whole Nine Yards” fell into his lap after he’d begun drinking again following a period of sobriety, the Daily Mail said. He said he was intimidated by Willis.

“So, I’d gotten ‘The Whole Nine Yards’ and had embarked on a friendship with the most famous movie star on the planet, but even I knew I was drinking way too much to pull this movie off,” Perry wrote, according to the Daily Mail. “Desperate measures would be needed. Some might be able to party perfectly well and still show up and do the work — but they weren’t addicts like I was.”

Perry said his solution was to ingest some Xanax, an anti-anxiety medication that can also be addictive, before going to one of Willis’ parties. It would allow Perry to “drink with Bruce and the others but then when I’m finally alone I can just pop one of these and go to sleep.”

“I may have been a man with a plan, but I was also ignoring the fact that this was a completely lethal combination,” Perry said.

In writing about how “the parties raged under Bruce’s disco ball,” Perry’s tone is admiring of Willis’ stamina, even as he’s self-deprecating about himself. Perry also insisted that Willis didn’t have a problem like he did.

“Here was a big difference between Bruce and me,” Perry wrote, according to the Daily Mail. “Bruce was a partier; I was an addict. Bruce has an on-off button. He can party like crazy, then get a script like ‘The Sixth Sense’ and stop partying and nail the movie sober. He doesn’t have the gene: He’s not an addict.”

As Perry rationalized Willis’ self-indulgent behavior, he seemed to ignore the fact that Willis’ all-night parties, apparently involving heavy drinking by Willis and others, could be seen as demonstrating a lack of professionalism and self-discipline about his craft.

Willis was no longer married to Demi Moore at this time; they separated in 1998, then divorced in 2000, the year “The Whole Nine Yards” was released, but it’s worth wondering if Willis’ reported self-indulgence off-camera contributed to his career decline after the highs of Michael Bay’s action blockbuster, “Armageddon,” in 1998 and M. Night Shyamalan’s “The Sixth Sense” in 1999, which were both commercial and critical successes delivering Willis’ some of the best reviews of his career.

Willis’ once high-flying career went into steady decline over the next 20 years. By the time Willis retired earlier this year, he could only get roles in low-budget independent action thrillers that might pay well for a few days work but are not well-regarded in the industry.

Rumors also began to surface that Willis appeared confused on sets and had to be fed his lines through an earpiece. When his family announced his retirement in March, they said he had been diagnosed with aphasia, a disorder caused by damage to the area of the brain that controls language expression and comprehension.

Meanwhile, Perry continues to give interviews and maybe get into more trouble with some of his revelations. His book was released Tuesday.

Perry didn’t apologize to Bertinelli, who went on TikTok last to suggest she was “mortified” by the actor revealing that, in 1999, they enjoyed “a long, elaborate make-out session” while her husband was in the room with them.

Perry apologized for his comments about Reeves, People reported. In his book, Perry wrote about his friendship with the late actor River Phoenix and said, “River was a beautiful man, inside and out — too beautiful for this world, it turned out. It always seems to be the really talented guys who go down. Why is it that the original thinkers like River Phoenix and Heath Ledger die, but Keanu Reeves still walks among us?”

When Perry’s comment ignited uproar, he issued a statement saying he misspoke and that he’s “actually a big fan of Keanu.” Perry said, “I just chose a random name, my mistake. I apologize. I should have used my own name instead.”