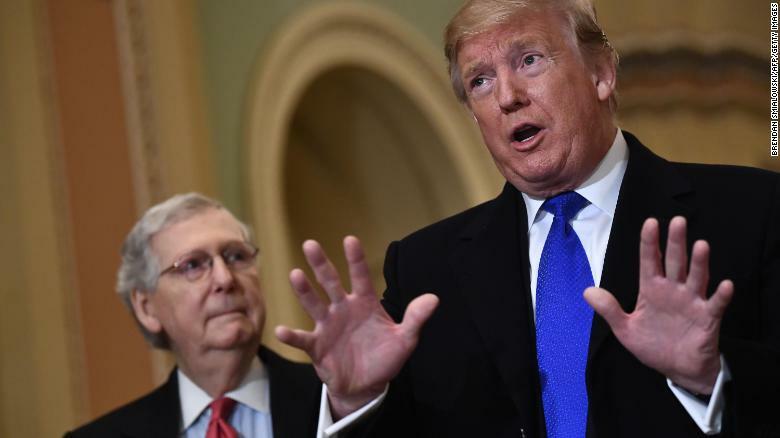 Alabama Senate candidate Mo Brooks attempted to jumpstart his fledgling campaign — and get back in Donald Trump’s good graces — Monday by signing on to one of the former President’s pet causes: removing Mitch McConnell as Senate GOP leader.

“Today, I unveil my pledge to America to fire Mitch McConnell,” Brooks said in a web video released Monday. “If elected to the Senate, I will not vote for Mitch McConnell for leader. And I will do everything in my power that Republicans choose a conservative to be leader.”

The move came in the wake of reports, including from CNN’s Gabby Orr, that Trump was considering pulling his endorsement from Brooks, who has struggled to gain traction ahead of the crowded May Alabama GOP Senate primary. Brooks called on his opponents to make the same pledge, adding: “That’s the battle across America — McConnell versus Trump in a war for the heart and soul of the Republican Party.”

That’s the lens through which Trump and his allies prefer to view this year’s Senate GOP primaries. But the same can’t be said for most of the candidates running in those primaries.

In the 13 months since Trump first called for McConnell to be removed as Senate Republican leader, only three of the party’s high-profile Senate candidates (and no sitting senators) have joined him.

Eric Greitens, the scandal-plagued former governor of Missouri, was the first last September. Trump has not yet endorsed in that primary, but more establishment-oriented Republicans fear Greitens would put the reliably red state in play if he was the nominee.

Then in December, Republican Kelly Tshibaka, who is challenging Alaska Sen. Lisa Murkowski with Trump’s backing, also said she would not support McConnell as leader if elected.

But even as other Republican Senate candidates have aggressively sought Trump’s endorsement, and the former President has repeatedly attacked McConnell, Brooks only became the third member of that group Monday. And Brooks hardly did so from a position of strength, only going that far once he felt Trump’s support slipping away.

For now, most other Republican Senate contenders are trying to walk a fine line between Trump and McConnell. On the one hand, they know they can’t alienate Trump or his base if they have any hope of advancing through the primary. And on the other, they don’t want to shut off the financial spigot McConnell can provide through his well-funded outside groups — or be on his bad side if they do end up in the Senate next year.

In fact, prior to Brooks’ move Monday, there were as many examples of Trump and McConnell being on the same page in open primaries as there were of candidates who supported the Senate GOP leader’s ouster. Trump and McConnell have both lined up behind Herschel Walker in Georgia and Adam Laxalt in Nevada, two high-profile battleground contests.

That’s not to say all has gone according to plan for McConnell. Most notably, he failed to recruit top GOP candidates (who were far from Trump acolytes) into Senate races in Arizona, Maryland and New Hampshire. And other Trump-McConnell proxy battles are sure to spring up between now and November.

But for the time being, he’s managed to avoid widespread rebukes from the party’s Senate contenders — despite Trump’s best efforts.

The Point: Trump remains the most influential figure within the Republican Party. But the lack of support for his campaign to oust McConnell shows there is a limit to that influence.