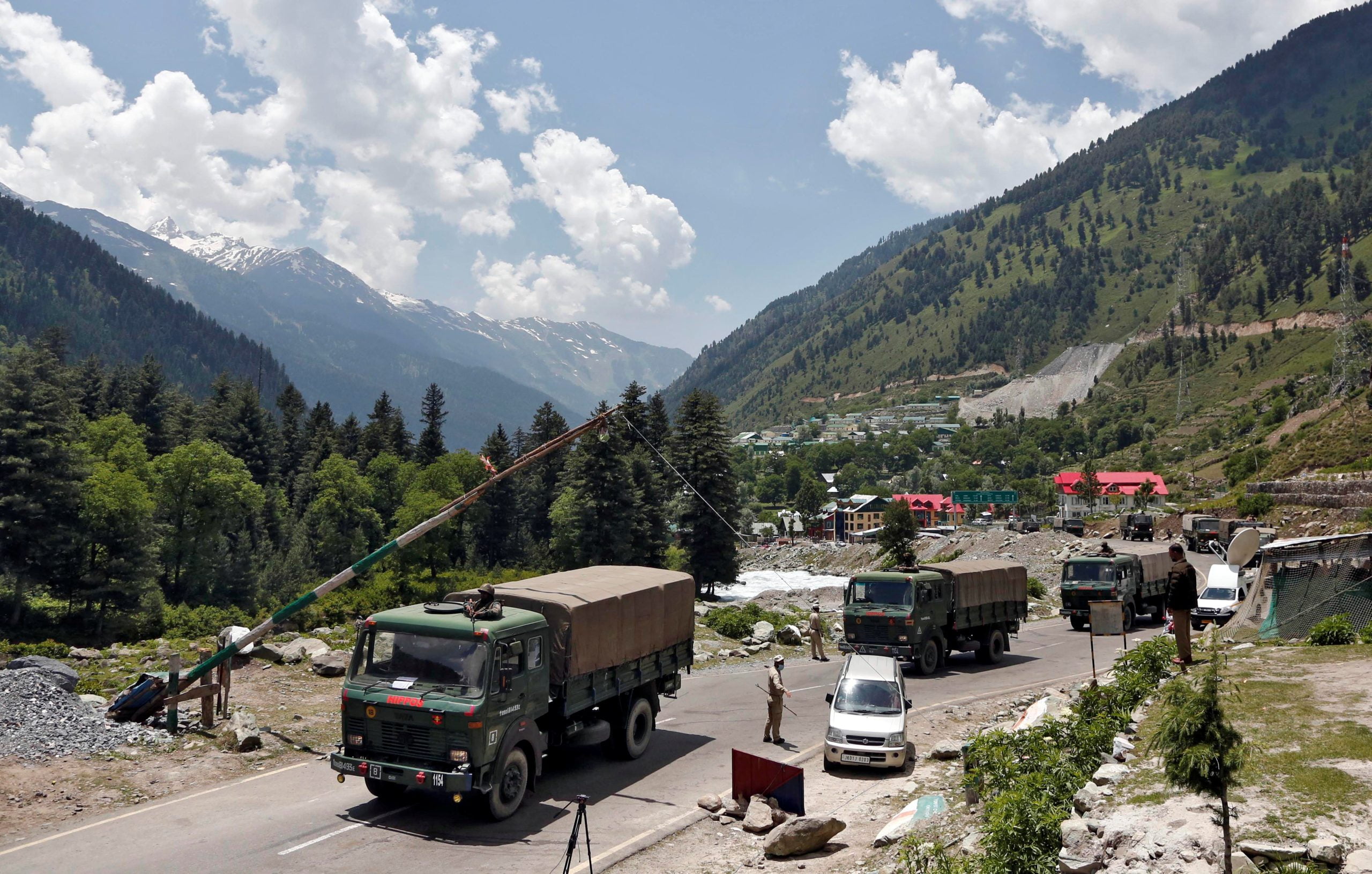 India and China went to war in 1962 over the same Himalayan region where at least 20 soldiers were killed Monday night in a bloody confrontation between the two sides. A little under six decades ago, one month of combat resulted in a Chinese military victory, with Beijing declaring a cease-fire after securing de facto control of Aksai Chin, an area claimed by both countries. The month-long battle claimed the lives of around 700 Chinese troops and approximately double that on the Indian side. But the militaries that face off in the Himalayas today are far different from those that fought 58 years ago. Conventional wisdom has it that China holds a significant military advantage over India, but recent studies from the Belfer Center at the Harvard Kennedy School of Government in Boston and the Center for a New American Security in Washington suggest India maintains an edge in high-altitude mountainous environments, such as the one where the 2020 face-off is taking place.

What is the Line of Actual Control?

No one expects the fresh tensions to explode into nuclear war, but the fact that both China and India have become nuclear powers since their previous encounter cannot be ignored when assessing the balance of power. Beijing became a nuclear power in 1964 and India in 1974.

Figures released this week by the Stockholm International Peace Research Institute (SIRPI) estimate China has approximately 320 nuclear warheads — more than double India’s 150. Both powers have seen their arsenals grow in the past year, Beijing’s by 40 warheads and New Delhi’s by 10, according to SIRPI. Both countries maintain a triad of delivery systems — missiles, bombers and submarines. Both also ascribe to a “no first use” policy, however, meaning they’ve pledged only to use nuclear arms in retaliation to a nuclear attack on their county.

India has about 270 fighters and 68 ground-attack aircraft it could bring to bear in combat with China, according to a study published in March by the Belfer Center. New Delhi also maintains a string of small air bases near the Chinese border from which it can stage and supply those aircraft, the Belfer study, authored by Frank O’Donnell and Alexander Bollfrass, claimed. China, by contrast, has 157 fighters and a small fleet of ground-attack drones in the region, the Belfer study said. The People’s Liberation Army Air Force (PLAAF) uses eight bases in the region, but most of those are civilian airfields at problematic elevations, the study suggests. “The high altitude of Chinese air bases in Tibet and Xinjiang, plus the generally difficult geographic and weather conditions of the region, means that Chinese fighters are limited to carrying around half their design payload and fuel,” the study claims. Aerial refueling could give the Chinese planes more payload and combat time, but the PLAAF doesn’t have enough aerial tankers to get the job done, the study suggests.

The Belfor study also gives the Indian Air Force (IAF), with its Mirage 2000 and Sukhoi Su-30 jets, a qualitative edge in the region, where China fields J-10, J-11 and Su-27 fighters. The Indian Mirage 2000 and Su-30 jets are all-weather, multi-role aircraft — while of the Chinese jets, only the J-10 has those abilities. Meanwhile, India has built up its bases in the region with China in mind, according to an October 2019 report from the Center for a New American Security.

“To weather a potential People’s Liberation Army (PLA) attack, India has placed greater emphasis on infrastructure hardening; base resiliency; redundant command, control, and communications systems; and improved air defense,” the report claims. The Belfer study points out that China, facing perceived threats from the United States on its eastern and southern flanks, has strengthened its bases there to the neglect of the Himalayas, leaving at least four PLA airbases vulnerable. “Indian destruction or temporary incapacitation of some of the four above air bases would further exacerbate these PLAAF operational inflexibilities and weaknesses,” it claims. The Belfer report gives the edge to India’s air force in one other area — experience.

“Recent conflicts with Pakistan give the current IAF a level of institutional experience in actual networked combat,” it says. Lacking such experience, Chinese pilots may have difficulty thinking for themselves in a dynamic aerial battlefield, according to the Belfer report. “Recent PLAAF exercises with unscripted scenarios have found that pilots are excessively reliant upon ground control for tactical direction,” it says. “This suggests that PLAAF combat proficiency may be significantly weaker than often estimated.”

While India has the experience in the air, the CNAS report says it is also hardened on the ground, fighting in places like Kashmir and in skirmishes along its border with Pakistan.

“India is by far the more experienced and battle-hardened party, having fought a series of limited and low-intensity conflicts in its recent past,” the CNAS report says. “The PLA, on the other hand, has not experienced the crucible of combat since its conflict with Vietnam in 1979.” That month-long border war, launched by China in response to Vietnam’s military intervention in Cambodia, is largely considered a defeat for China. The PLA had trouble making gains against Vietnamese troops that were smaller in number but vastly more experienced after fighting US forces during the Vietnam War.

Yet while there may be a big gap in experience in the Himalayas today, there is reportedly parity in the numbers of ground troops. Belfer estimates there are about 225,000 Indian ground forces in the region, as well as 200,000 to 230,000 Chinese.

The numbers may be misleading, however. Counted among those PLA forces are units assigned to keep down any chance of insurrection in Xinjiang or Tibet, or deal with any potential conflict along China’s border with Russia. Moving them to the Indian front in the event of large-scale hostilities presents a logistical problem, as Indian airstrikes could target high-speed rail lines on the Tibetan plateau or choke points in the mountainous terrain closer to the border. “By contrast, Indian forces are already largely in position,” the report says.

However, the CNAS report adds that those Indian forces operate in rough terrain in steep valleys and can’t be easily moved to plug breaches that any Chinese incursion might make. In short, the Indian troops too could be vulnerable to Chinese artillery and missile attacks on choke points in the mountains. Those attacks could come by Chinese artillery or missiles stationed on the Tibetan plateau, which in some cases look right down on Indian border posts, the CNAS report says.

But the question is whether, in the event of large-scale conflict, China has enough missiles to take out all the targets it would need to hit in India. The Belfer study cites estimates of a former Indian Air Force officer, who predicts China would need 220 ballistic missiles to knock out one Indian airfield for a day. With only 1,000 to 1,200 missiles available for the task, China would quickly run out of the means to shut down India’s airfields, it says.

One area where China may be gaining advantage is technology and new weapons. With a larger defense budget and rapidly modernizing military, Beijing can’t be counted out to close any gaps in its forces.

“China’s economy is five times the size of India’s and Beijing’s defense spending far outstrips New Delhi’s defense budget by a factor of four to one,” said Nishank Motwani, international adviser at the National Center for Dialogue and Progress in Afghanistan. “The power differential between China and India is in Beijing’s favor and this asymmetry is only widening.” Chinese state media has recently been heavy on articles and videos of new weaponry being deployed to its Tibetan region for exercises, including the Type 15 light tank and the new 155-millimeter vehicle-mounted howitzer. Both were introduced to the Chinese public at last year’s much-hyped National Day military parade in Beijing. “The weapons were specifically designed with advantages for plateau regions and can play important roles in safeguarding border areas,” military experts told the state-sponsored Global Times. The Chinese outlet on Tuesday — after the clash with Indian troops the night before — mentioned the new weapons in a report on war games in the mountainous region. “These kinds of drills demonstrated the PLA’s capability to win a regional, high-elevation conflict in its early stages by decisively eradicating the hostile headquarters and commanders, a PLA veteran who was once deployed in Tibet and asked not to be named told the Global Times,” the report said.

While China may be largely on its own facing off against India in the Himalayas, New Delhi has been developing defense relationships with countries wary of Beijing as a rising military power. New Delhi has grown closer to the United States military in recent years, with Washington calling India a “major defense partner” while increasing bi- and multilateral training.

In the event of a large-scale Himalayan conflict, US intelligence and surveillance could help India get a clearer picture of the battlefield. The Belfer report uses the example of what might happen if China was to surge troops from its interior to the front lines in the mountains. “Such a Chinese surge would also attract attention from the United States, which would alert India and enable it to counter-mobilize its own additional forces from its interior,” it says. India participates in joint military drills with countries like the US, Japan, France and Australia. “Western troops participating in such war games and exercises regularly have expressed a grudging admiration for their Indian counterparts’ tactical creativity and high degree of adaptability,” the CNAS report says. “China’s joint training endeavors, on the other hand, thus far have remained relatively rudimentary in scope — with the notable exception of its increasingly advanced military exercises with Pakistan and Russia.”