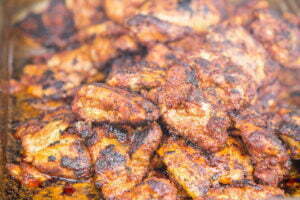 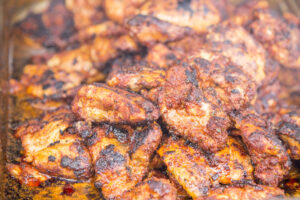 When it comes to food, Jamaica is known for jerk: meats (like chicken and pork) seasoned with a mixture of herbs and spices and slow-cooked most often on a grill made from a steel drum. The spices include allspice, thyme and scotch bonnet pepper. The meat is served with rice and peas, bread or a deep-fried cornbread called “festival.”

If you’re looking for a plate of jerk chicken and rice with kidney beans cooked in coconut milk and spices, here’s where to find it.

When you roll up to Am-a-lab on a tiny side street in Musashi Koyama in Shinagawa, the jerk drum repurposed as a table sitting in the alley might be a dead giveaway. But just in case you’re still unsure, the scotch bonnet plants by the door let you know you are in the right place. Or just step inside—the smell of jerk and sounds of reggae seal the deal.

Three words to describe the food: flavor without heat. Your lips won’t go numb from the tender chicken and pork but it’s unmistakably jerk. The rice and peas here use a mixture of long grain jasmine rice and regular Japanese rice. It’s aromatic with allspice and flaky, or “shelly” (as Jamaicans like to say), compared to Japanese rice which is usually a bit stickier.

Vegetarian ital stew (pronounced ai–tal), consisting of beans and vegetables cooked in coconut milk with natural seasonings, is only available in winter. The chef quickly whipped up some jerk okra and green peppers to serve with the rice and peas instead. This came with coleslaw and pickles, which have a pronounced scotch bonnet flavor but without the spiciness.

Other jerk items on the menu include sardines and mutton, and there is also steamed fish and brown stew chicken.

Sure, the constant reggae from the speakers helps. So too, the bottle of Grace Hot Pepper sauce—a household name in Jamaica—that the server places in front of you. But there is no doubt about it: the “it factor” that makes Goodwood Terrace in Shibuya feel like any bar or jerk spot in Jamaica, is the steel drum behind the counter. Used to grill the meats, the drum sends flavorful smoke swirling around the room.

The street outside, just off Dogenzaka, is quiet on a weekday afternoon, but inside the restaurant, it’s a smoky, reggae party. The jerk chicken is, of course, infused with that smokiness and filled with spices. Rice, peas and crispy-on-the-outside-soft-on-the-inside “festival” bread are available, too, along with other main dishes including curry goat, oxtail stew and escovitch fish. The menu is vast, listing jerk chicken burgers, jerk chicken sandwiches, jerk gizzard as well as standard fried food such as wings and onion rings.

I had the ital stew with a filling and tasty array of veggies like okra, carrots and potatoes along with a Red Stripe beer. Goodwood operates as a bar and the menu has a lot of drinks, including Jamaican rum.

Island Kitchen is a food truck in Tokyo serving up a staple of Jamaican food culture: the box food. In Jamaica, hundreds of corner shops and restaurants serve these boxes typically with rice, meat and salad. The Island Kitchen box, which was packed to the brim, did not disappoint. In fact, two years ago, a friend bought lunch at Island Kitchen and raved about the food. She sent me a picture captioned “real box food.”

Island Kitchen is parked at different locations in Tokyo on different days of the week. I went to get my box food a short walk from Roppongi Itchome station in Azabu Juban. Smack in the middle of this office district was a food truck playing reggae and soca music (Trinidad and Tobago’s mix of African and east Indian rhythms) serving box food to people mostly in business or work attire. As I approached the truck I saw something I was not prepared for: a line. It had only been 45 minutes since they’d opened for the day.

The menu here is straightforward: jerk chicken, pork, beef or a combo box. The chicken leaves out the spiciness but keeps the smoke and the rice and peas, and veggies complement it well. If you like your food extra spicy, opt to have the chili sauce poured on.

If you want to infuse your homecooked meals with a little Jamaican-ness, try the hot sauce from A-ma-lab and Goodwood’s jerk seasoning.

The A-ma-lab hot sauce is not hot—it’s flavorful. While there is a bit of a kick, you may need to use a lot more to feel the heat. The sauce is available in-store and those who bring their own container can expect a discount. A-ma-lab also takes orders for half or whole jerk Christmas chickens, however, they have unfortunately already sold out for Christmas 2022.

Goodwood describes itself as an “authentic Jamaican restaurant.” True to that, the ingredients in its jerk seasoning include thyme, onion and allspice, standard items in most Jamaican meat dishes. The jerk seasoning, which comes in regular and Caribbean hot, is available in-store and from the restaurant’s official online store, Amazon and Rakuten. Their website also links a handy jerk chicken recipe video too.