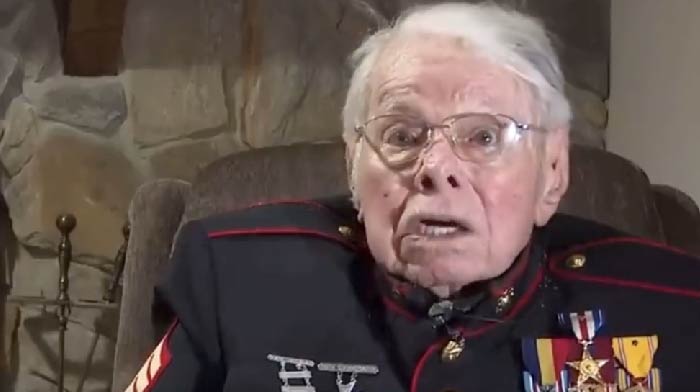 Happy Fourth of July, everyone.

I was looking online this morning, and I came upon this video that Kari Lake shared on her Twitter account.

And while it’s not the “happiest” of messages on this special day, I think it’s important, so I wanted to share it with you.

A local TV station interviewed a 100-year-old vet, who broke down in tears over what a hell-hole America has become under Joe Biden and the progressive radicals.

Fox News reported that much of what American soldiers fought for in World War II has “gone down the drain,” according to U.S. Marine Carl Spurlin Dekel, who celebrated his 100th birthday last week.

Dekel says serving his country in WWII was the most important thing he ever did, according to Fox 13. The veteran and Silver Star holder says he wouldn’t hesitate to put his life on the line again, but regrets that the U.S. has slipped away from what he remembers.

“People don’t realize what they have,” Dekel told the outlet. “The things we did and the things we fought for and the boys that died for it, it’s all gone down the drain.”

“The things we did, the things we fought for and the boys that died for it, it’s all gone down the drain. Our Country’s gone to hell” pic.twitter.com/0TGrxVBq2N

Dekel’s statements came the same day the U.S. lost the last surviving Medal of Honor recipient from WWII. Hershel “Woody” Williams died Wednesday at 98 years old, surrounded by his family at a hospital named after him in his home state of West Virginia.

Williams, also a U.S. Marine, received his medal for heroism from former President Harry Truman during the battle of Iwo Jima in 1945.

Sad what this country has become, and it hurts my heart that this poor man has to see and feel this in his last days on this earth.

Keep fighting to get this. country back where it belongs… It matters to so many people.