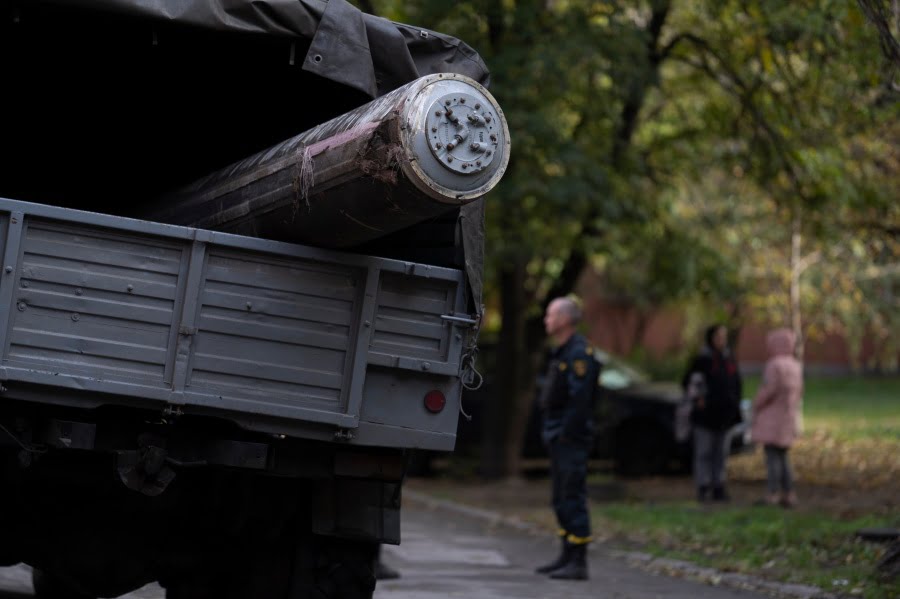 KYIV, Ukraine (AP) — Ukrainian forces continued to pile on the pressure on Russian positions in occupied Kherson Friday, targeting resupply routes across the Dnieper river as Kyiv inched closer to a full-scale assault to retake the strategic southern port city.

As many as 2,000 Russian draftees have poured into the Kherson region “to replenish losses and strengthen units on the front line,” according to Ukraine’s Army General Staff.

The Antonivskyi Bridge that is on a main route from Crimea to Russian-held territories in southern Ukraine was struck late Thursday, said Natalia Humeniuk, a spokesperson for Ukraine’s southern operational command, but but only after the 10 p.m. local curfew, to avoid civilian casualties.

“We do not attack civilians and settlements,” Humeniuk told Ukrainian television after Kirill Stremousov, the Moscow-installed deputy chief of the regional administration claimed that at least four civilians were killed as a result of Ukrainian strikes.

Stremousov said the attack occurred some 40 minutes after the curfew’s start. A further 13 people suffered wounds, Kherson’s top health official Vadim Ilmiyev said. Among the dead and wounded were journalists from the Russia-created TV channel ‘Tamvria,’ according to Stremousov.

Earlier Ukrainian strikes had made the Antonivskyi Bridge inoperable, prompting Russian authorities to set up ferry crossings and pontoon bridges to ferry supplies to Russian troops in Kherson, which sits on the Dnieper’s western bank. Those crossings have been regularly targeted by Ukrainian rockets.

Russian-installed officials have urged residents to evacuate from Kherson city for their safety and to allow the military to build fortifications. Ukraine’s military reported Friday that bank employees, medical workers and teachers have started to be evacuated as the city’s infrastructure also began to wind down. At least 15,000 residents of an expected 60,000 have already been relocated from the city and surrounding areas.

Kherson city, with a prewar population of about 284,000, was one of the first urban areas Russia captured when it invaded Ukraine, and it remains the largest city it holds. It is a prime target for both sides because of its key industries and major river port.

The region of Kherson, along with Luhansk, Donetsk and Zaporizhzhia, were illegally annexed by Russian President Vladimir Putin even though not all the territory is Russian-held. He then imposed martial law earlier this week in an attempt to assert Russian authority amid a string of military setbacks and strong international criticism.

In the Donetsk region, two people were killed in the past 24 hours after Russian forces shelled the city of Bakhmut, Regional Governor Pavlo Kyrylenko said. Russian troops have been unable to advance toward the city for over a month now.

Some nine people were wounded in two Russian attacks in the eastern city of Kharkiv, according to regional governor Oleh Syniehubov.

Amid the fighting, the Kremlin insisted Friday that Putin has been open to negotiations “from the very beginning,” and “nothing has changed” in that respect.

Kremlin spokesman Dmitry Peskov told reporters that Putin “tried to initiate talks with both NATO and the United States even before the special military operation” — the Russian term for its war in Ukraine.

Peskov was speaking following earlier remarks by Turkey’s President Recep Tayyip Erdogan, who said Putin appeared to be “much softer and more open to negotiations” with Ukraine than in the past.

Meanwhile, Russia’s deployment of aircraft and troops to air bases in Belarus raised the specter of another front on Ukraine’s northern border, although officials said such a move was unlikely.

The Ukrainian army’s general staff reported a heightened chance that such an attack could aim to cut supply routes of Western weapons and equipment. The build-up could also aim to divert Ukrainian resources and weaken any counteroffensive in the south.

Follow AP’s coverage of the war in Ukraine: https://apnews.com/hub/russia-ukraine