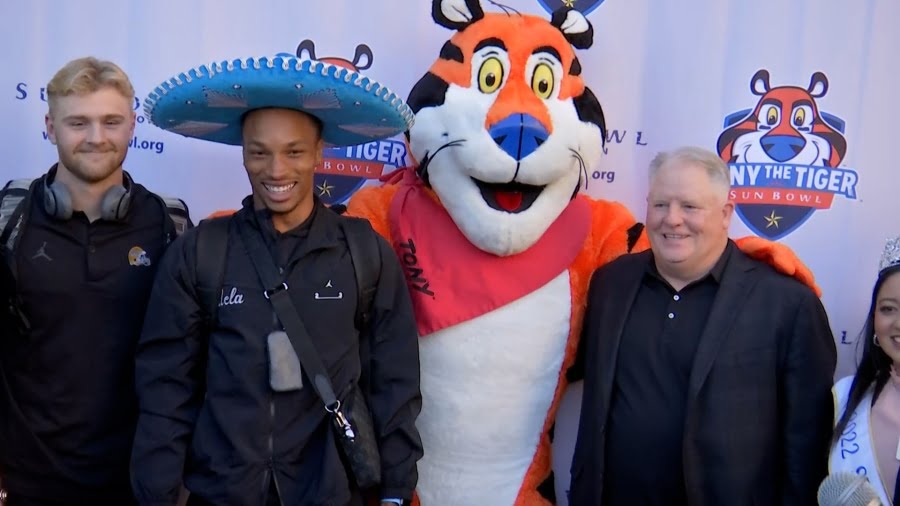 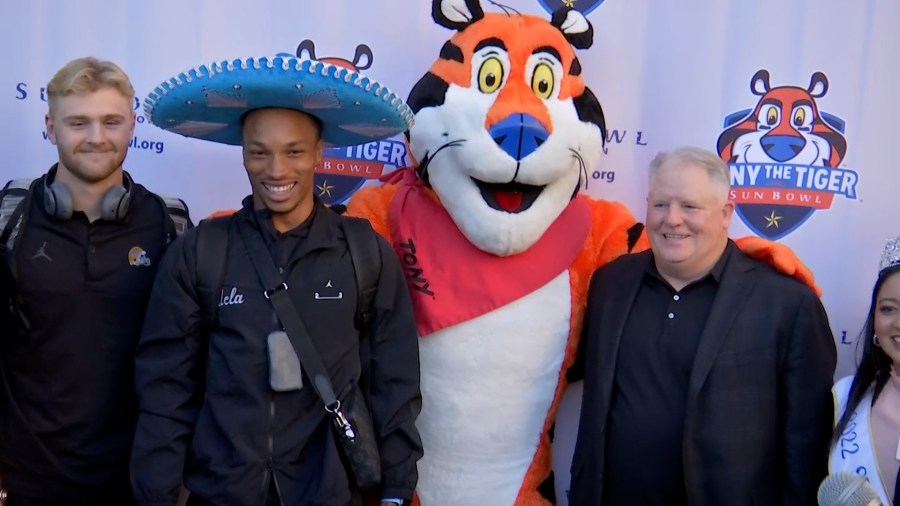 EL PASO, Texas (KTSM) – At long last, the gang’s all here for the 89th Tony the Tiger Sun Bowl.

After the ACC’s Pitt Panthers touched down in El Paso on Christmas Day, the Pac-12’s representative – the No. 18 UCLA Bruins – arrived in the Sun City on Monday.

Bruins head coach Chip Kelly – formerly at Oregon and in the NFL with the Philadelphia Eagles and San Francisco 49ers – was last in El Paso for the Sun Bowl in 2007, when he was the offensive coordinator for Oregon in their win over South Florida.

“Our team is excited. Any time you get to go to a bowl game and especially this one, it’s the second-oldest of all the bowl games, and the hospitality is great. To be back again today and see the same faces, it’s a lot of fun. As Tony (the Tiger) would say, it’ll be great,” Kelly said.

After touching down in El Paso, the Bruins went to TopGolf and to the Sun Bowl gift suite, as did Pitt. UCLA will hold its first practice in El Paso at Bel Air High School on Tuesday morning. The workout is closed to the public.

Bruins quarterback Dorian Thompson-Robinson, running back Zach Charbonnet, wide receiver Jake Bobo and other star players have all been practicing in Los Angeles in the lead-up to the Sun Bowl. Thompson-Robinson was spotted at TopGolf on Monday as well.

As for Pitt, the Panthers will be without at least eight starters – three offensive, five defensive – in the Sun Bowl, due to injuries, opt-outs and transfers.

At the quarterback position, the Panthers will look to replace quarterback Kedon Slovis (transferred to BYU) with fifth-year senior Nick Patti under center. Head coach Pat Narduzzi said Patti would, “most likely,” get the start, while Nate Yarnell could see some time as well.

Patti started the Peach Bowl for the Panthers last year, before breaking his collar bone in that game. He also came on in relief of Slovis vs. Tennessee early in the season and nearly won the game for the Panthers.

“Our guys believe in Nick,” Narduzzi said. “He’s shown leadership for us.”

Added Patti, “”I feel good. I was here in 2018. people here are great, great city, love being back. “The bowl games are weird. You get a couple of weeks off, so you have to train your body and have time to rest. The (bowl) experience last year was great. I was ready for it. I’ll be ready to show out again.”

Running back Rodney Hammond Jr. will be the one to attempt to replace the production of All-American running back Israel Abanikanda, who opted out of the bowl game.

Hammond and Abanikanda were locked in a battle for the starting running back job in the preseason and the Panthers are confident in his abilities to get the job done in El Paso.

“I have a good connection with Rodney Hammond,” Patti said. “We’ve had a lot of reps together and I feel comfortable being with him. This is my fifth year here. I’m the older guy here; I come out with a positive mindset, positive attitude and confidence.”