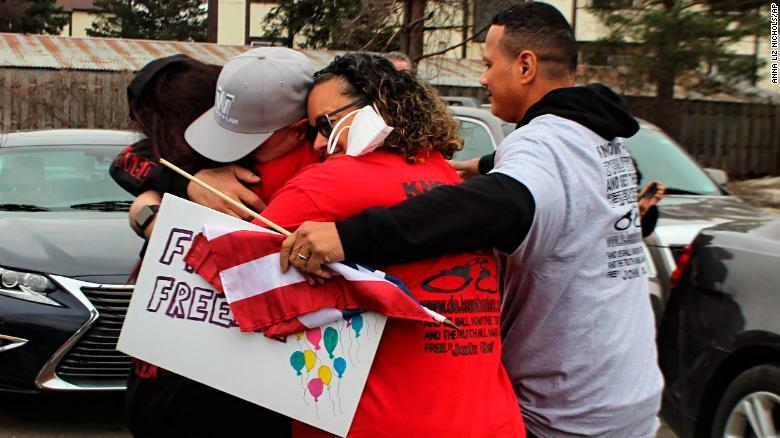 George DeJesus is embraced by family and supporters on March 22 at a restaurant in Lansing.

Brothers George and Melvin DeJesus are out of prison after serving nearly 25 years for a crime they didn’t commit.

“Walking out, just with the feeling of vindication, it was great,” George DeJesus told reporters in Michigan on Tuesday, shortly after he was released, according to CNN Detroit affiliate WDIV. “This is the best day of my life.”

He said he hadn’t seen his brother in roughly 24 years. The siblings were being held in separate correctional facilities, according to the Michigan Department of Corrections website.

They reunited and embraced, according to the affiliate. “I’m ecstatic,” Melvin DeJesus said. “I waited so long for this.” 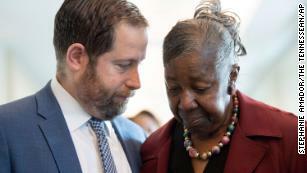 Despite claims of alibis, they were convicted in 1997 of murder and felony firearm in the 1995 killing of Margaret Midkiff, who was found dead in her Pontiac home, and they were sentenced to life without parole.

“Twenty-five years of your life have been taken from you that cannot be replaced,” Oakland County Circuit Court Judge Martha D. Anderson told the brothers, according to Cooley. Anderson set aside their convictions Tuesday during a Zoom hearing. “Hopefully, you will find some solace in the fact that you will be able rejoin your family and start living a normal life outside the prison walls.”

At the time of the killing, DNA linked someone else to the crime scene: Brandon Gohagen, who initially told police the two brothers didn’t have anything to do with the killing, according to a news release from Cooley Law School. There was no DNA or other evidence found that linked the DeJesus brothers to the crime scene, the release said. 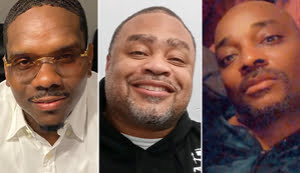 But Gohagen later told authorities Melvin DeJesus had forced him to sexually assault the victim and said that it was the brothers that later bound and beat the victim to death, according to the release. Gohagen pleaded guilty to second-degree murder and first-degree criminal sexual conduct in exchange for testifying against the two, the release said. The brothers were convicted and sentenced in 1997.

About two decades later, in 2017, Gohagen was convicted of raping and killing another Pontiac woman a year before Midkiff’s 1995 killing, according to a University of Michigan news release. Investigators discovered 12 other women who had been “emotionally, physically and sexually abused” by Gohagen, the Michigan attorney general’s office said.

As CIU looked into the brothers’ case, it found evidence that impeached Gohagen’s credibility, including a witness who said Gohagen had implicated the brothers in exchange for a plea deal.

CIU investigators also found witness statements that corroborated the brothers’ alibi the night of Midkiff’s killing. The siblings had said they were all at a party the night Gohagen said the crime occurred and that the three of them went their separate ways afterward, the attorney general’s office said.

CNN has reached out to Gohagen’s attorney. 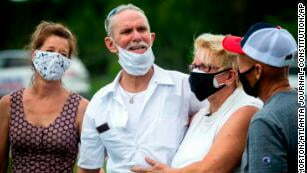 “We are thrilled to learn that our client, Melvin DeJesus, and his brother, George, will be fully exonerated for this murder, some 26 years after the true killer framed the brothers for this heinous crime,” Dave Moran, co-director of the Michigan Innocence Clinic, said in a statement. “We will now focus on helping Melvin DeJesus adjust to his freedom and move on with his life.”

“George has steadfastly maintained that he had nothing to do with this terrible crime,” Tracey Brame, director of the WMU-Cooley Innocence Project, said in a separate statement. “We are grateful to Attorney General Dana Nessel and the Conviction Integrity Unit team for their willingness to listen to the brothers and reinvestigate the case.”

The brothers’ exonerations are the third and fourth wrongful convictions overturned with the help of the CIU, the attorney general’s office said. The unit has so far received more than 1,600 requests for assistance, the office added.

“I appreciate the tireless work the unit put in to secure these exonerations for the DeJesus brothers,” Michigan Attorney General Dana Nessel said in a statement, calling the outcome “another source of great pride” for the CIU

” I look forward to our continued collaboration with the Cooley Innocence Project and University of Michigan Innocence Clinic in our collective pursuit of providing justice to those wrongfully imprisoned,” Nessel said.

Exonerated prisoners are eligible for up to a year of reentry housing and two years of other supportive services, including transportation and job assistance and training, according to the attorney general’s office.

The state also passed the “Wrongful Imprisonment Compensation Act” in 2016 which aims to provide people exonerated of wrongful convictions with $50,000 for each year they were imprisoned, as well as some restitution for other expenses, including attorney fees, according to the Innocence Project.