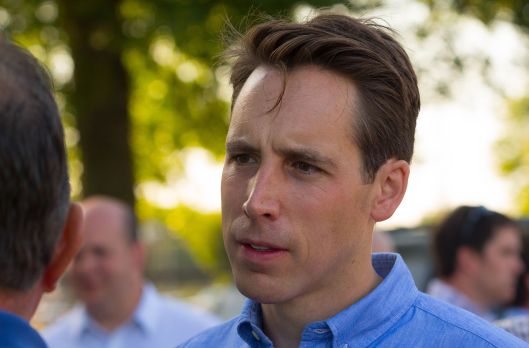 Josh Hawley @HawleyMO
On this Labor Day, thanks to the working men and women who built this country – and who deserve better than the condescension and dismissive arrogance this Administration shows them every day
6:12 PM · Sep 5, 2022

Seriously, champion of the working person?

Some of the responses to Josh Hawley (r):

Do you support unions? Do you oppose “right to work” for less?
Do you never cross picket line?
Do you support OSHA, a raise in the minimum wage, the NLRB?
Provide evidence of your support for working people.

Heehaw Hawley went to a private Jesuit high school then Stanford and Yale Law but he wants you all to think he’s a humble working guy.

If and when you do actual labor in your life, I’d love to hear about it. And running out of the senate chamber in fear is not labor, it’s just your cowardice showing.

Thank your banker father and the privilege of all your private school experiences and educational tourism.

So, basically this tweet has nothing to do with hard working women like me, one of your constituents( not by choice) but a dig at the man who has had some of the highest jobs numbers and done more for the the working class than you ever will. #HawleyIsNoMO

Once again, @HawleyMO is a faux populist who masquerades as a faux Teddy Roosevelt populist. He will never go into the Arena and fight for the working people of Missouri. He has distain for them. Boycott @HawleyMO

You must be a real joy at birthday parties.

Democratic s express strong support for the labor movement. The party platform notes that “when workers are strong, America is strong.

GOP sees unions as a threat to “freedom in the workplace” & urges elected officials to pass laws which limit collective bargaining rights.

You tried to overturn an election for a self-proclaimed “billionaire” who didn’t pay the working men and women who built his businesses.
Carpenters, waiters, waitresses, bartenders, construction workers, plumbers, piano tuners, painters…
He stiffed them all.
But ok, fist pumper.

Thanks to the unions for 5-day weeks, paid vacation & better wages. Unfortunately, Josh & his party have done everything they can to undermine unions.

If Josh had his way, there would be no minimum wage, no right to collective bargaining & nothing but at-will employment.

Yet you voted against everything that could possibly help the American worker. We see you.

This is some hyper inflationary “irony”with a gob of condescension…about as precious as it gets. Bravo.

I have seen no condescension or arrogance from the current administration. I have only seen them continue to make change that will better Americans’ lives, and they have done so in a pressure cooker created by you and other MAGA extremists who push lies and hate constantly.

So, really just another grievance?

It’s not that hard to be a decent person or at least not be a jerk, but yet you seem to really struggle.

We will never run out of Josh Hawley jokes.

But please go on.

You mean how they encourage unions so that workers have the power to bargain?

The only condescension here is from the Yale elitist pretending to care about the working men and women of Mo, some of whom believe your drivel. However, less of them from 2018 believe, or trust you now.

Couldn’t even do a tweet about Labor Day without making it a political statement huh?
How’s this working out for you Joshy?

Once a fascist, always a fascist.