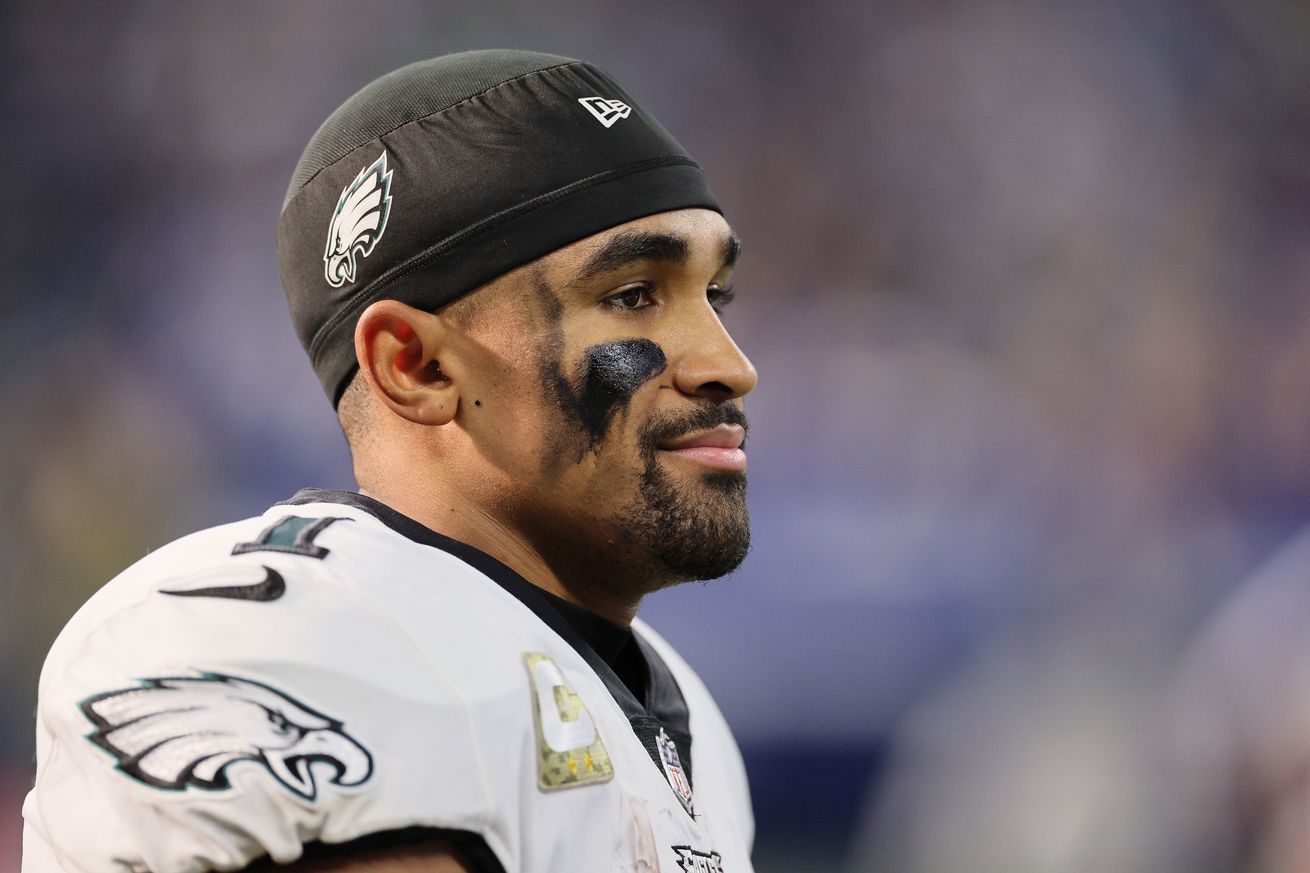 Let’s get to the Philadelphia Eagles links …

Top 10 Offensive Player of the Year favorites and their odds – ESPN
Jalen Hurts, Philadelphia Eagles. Why he’s a strong candidate: Hurts is the centerpiece of an offense that ranks fourth in points per game (25.6) and fifth in total yards (370.6). His team is 9-1. He continues to get it done on the ground — he is fourth in the NFL in rushing touchdowns with eight — and has taken major strides forward in the passing game. Hurts is sixth in completion rate (68.3%), second in yards per attempt (8.3) and fifth in QBR (65.0). In other words, he is doing it all. Why he might fall short: Passing stats seem to carry the most weight in these types of evaluations. If that proves true, Mahomes (28 touchdowns passes, 327 passing yards per game) will hold a distinct edge over Hurts (15 touchdown passes, 241 passing yards per game). And players like Jefferson, Hill and Mahomes are more established in the league, which could be another advantage in garnering votes. But when it comes to overall production, workload and the benefits of said work — the Eagles have the best record in football — it’s hard to argue against Hurts

Above the Nest with Raichele #66: Will Rookie WR Christian Watson keep his hot streak going? Black Helmet Debut + Injury Report – BGN Radio
Raichele Privette recaps the Eagles ugly win against the Colts, lists players to watch in the Eagles Sunday night game against the Packers and runs through each teams final injury report.

Calling Our Shots: APC’s most specific predictions for Week 12 – Acme Packing Company
Rcon14: The Packers register their lowest pressure rate of the season. The Packers front is a disaster right now. No Rashan Gary has completely neutered their pass rush, and Kenny Clark hasn’t played well in a month. The Eagles have a stout offensive line and a mobile quarterback which is nightmare fuel for this team. Philadelphia probably won’t need to pass a whole lot to win this game, but when they do, Jalen Hurts should have more than adequate time to throw.

Best DFS lineup strategy for Packers-Eagles on Sunday Night Football – DraftKings Nation
Captain’s Chair: Jalen Hurts, QB, Philadelphia Eagles — $17,400. Hurts has a fairly tough matchup in this game, as the Packers defense is allowing the seventh-fewest DFS points to opposing quarterbacks. The reason Hurts is still worthy of a Captain’s Chair is because of his dual-threat ability that comes from his rushing upside. He is helped in the passing game by two great receivers in AJ Brown and DeVonta Smith and should be able to tally stats both through the air and on the ground.

Mailbag: A way-too-early look at the Eagles’ top five draft targets – PhillyVoice
And yet, I do think there is valid cause for some nitpicks, most notably the run defense, and some occasional instances in which the defense was a little too slow to adjust to some opposing gameplans. His style of defense can also be highly unpleasing aesthetically when opposing offenses are able to methodically drive the field with a high number of plays run and a lot of time burned off the clock. I also think that some of the Negadelphians have legitimate concerns about what might happen to the Eagles’ (so far) stellar pass defense if they have to face better quarterbacks in the playoffs, considering they haven’t exactly faced a gauntlet of QB excellence.

Roob’s Observations: A star who needs to get his mojo back – NBCSP
4. The Eagles need A.J. Brown to get back to being A.J. Brown. First seven games, Brown ranked 5th in the NFL with 94 yards per game and 12th at 16.9 yards per catch. The last three, he’s 59th with 42 yards per game and 49th at 12.6 yards per catch. Along with a bobbled deep ball that turned into an interception in the Washington game and a bad fumble in the Colts game. Even the best WRs don’t have big games every week and Brown is still having a huge year and on pace for over 1,300 yards. But especially with Goedert out for at least three more games, the Eagles need Brown to be better than he has been the last few games.

Spadaro: 6 storylines to follow Sunday night vs. Packers – PE.com
2. Philadelphia: Six giveaways in the last two games after just three in the first eight games. The offense hasn’t been as explosive and high scoring in the last couple of weeks – a loss to Washington and the win on Sunday against Indianapolis. Those four turnovers against the Commanders obviously hurt the cause. Two second-half turnovers at the Colts stopped drives. There is always an emphasis on ball security, so this week is no different, but we see how vital that giveaway number is and what it means to the team’s success. Nine giveaways is still tied for the second-fewest in the league, so overall the ball security has been outstanding. Still, the Eagles want to stop cold the way it’s gone the last two games. Period.

Jim Irsay reacts to Nick Sirianni’s defense of Frank Reich – PFT
Irsay, in our view, misses the mark by thinking that Sirianni believes the decision was more personal than business. The more accurate assessment may be that Sirianni believes the Irsay gave Reich the business through a bad business decision. Irsay wanted to minimize the risk of owing quarterback Matt Ryan another $17 million in fully-guaranteed pay for 2023. Irsay decided to bench Ryan for the rest of the season, for the unproven Sam Ehlinger. Then, when Elhinger didn’t immediately become John Elway, Reich was fired. Enter Jeff Saturday, and he was allowed to immediately go back to the quarterback who gives the team a better chance of winning games. That’s likely why Sirianni thinks the decision stinks. Reich was forced to coach with one hand tied behind his back, and then he was held responsible for the inability to win games that way. After Irsay decided to fire Reich and roll the dice on a former player with no college or pro coaching experience, the business decision was abandoned in order to give Saturday a better chance to vindicate Irsay’s unconventional hiring maneuver.

The Dallas Cowboys currently have as many wins as their next 3 opponents do combined – Blogging The Boys
Objectively speaking though it is difficult to see the Cowboys losing any one of these next three AFC South games. The Indianapolis Colts have had a nice infusion of energy it seems, but they are still not a good football team. Somehow the Houston Texans are even worse than them, and the Jacksonville Jaguars cannot seem to put it all together for the 100th year in a row (by the way Dallas is going to visit Jacksonville in December for the first time since 2006 which is pretty cool).

Washington Injury Updates: Chase Young unlikely to play; Logan Thomas should be available vs Falcons – Hogs Haven
Chase Young is unlikely to make his 2022 debut this week against the Falcons. Washington activated him from the Reserve/PUP list this week, over a year after he tore his ACL. Young had reconstruction surgery that used a graft from his left patellar tendon to reconstruct the ACL in his right knee. Young has been practicing since he was designated to return on November 2nd. Ron Rivera and Jack Del Rio have been telling the media that Young wasn’t 100% since he came back, and that it would take time for him to get back on the field. If they don’t activate him for tomorrow’s game, it could be an even longer wait for his return. Next week Washington travels to MetLife Stadium to play the New York Giants. MetLife is one of 6 stadiums in the NFL that uses slit film turf. This is the surface that players have been calling for a ban on due to the amount of non-contact knee injuries.

‘All options on the table’ for new MetLife Stadium field — report – Big Blue View
Previous reports have indicated that MetLife, home to both the Giants and New York Jets, would have a new synthetic surface. The Field Turf at MetLife has long been a source of controversy, especially with the Giants annually among the teams with the most injuries suffered. Wide receivers Wan’Dale Robinson and Sterling Shepard each suffered torn ACLs at MetLife this season. Linebacker Darrian Beavers and guard Marcus McKethan were lost to torn ACLs suffered at MetLife during the preseason. The NFLPA has been outspoken about wanting grass playing surfaces at all NFL stadiums. The NFLPA provided this statement to ESPN in response to MetLife’s most recent plan.

WR Odell Beckham Jr. to start his visit schedule this week with Giants, then Cowboys and Bills – NFL.com
Free-agent wide receiver Odell Beckham Jr has set his visit schedule, with his tour of potential landing spots beginning this week. Beckham plans to visit the Giants on Thursday and Friday, sources informed of his plans say. After the weekend, Beckham will meet with with the Cowboys on Dec. 5. He’ll also visit the Bills. While there are additional teams that could be added to the mix, those visits are the only confirmed ones at this point, sources say.