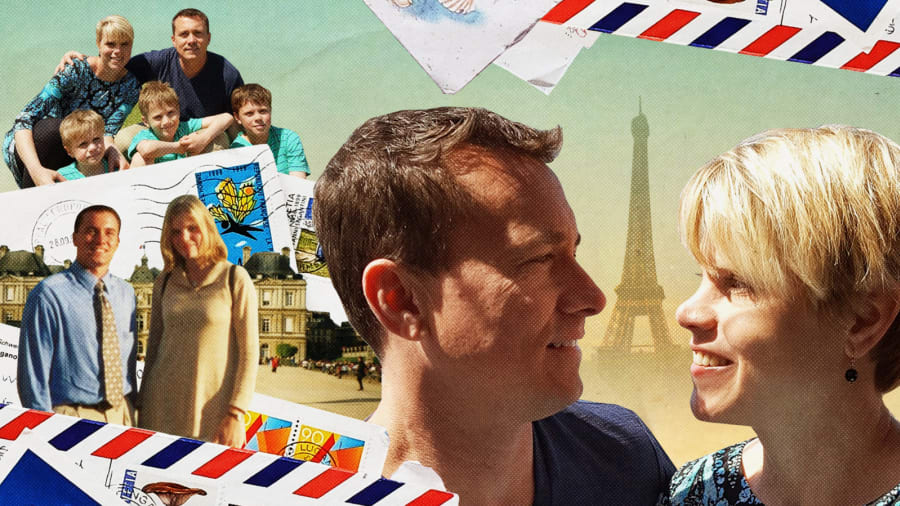 American graduate student Dan Giedeman spent much of his first trip to Paris inside a conference room.

It was September 1998 and Dan, then 27, was studying for a doctorate in economics at Washington University in St. Louis, Missouri. When his professor invited him to attend a meeting in the French capital, Dan jumped at the opportunity.
“I grew up in the middle of the United States, the Midwest. So I’d never had a chance to go to Europe, or really anywhere outside the country,” Dan tells CNN Travel today. “I was thrilled to go.”

On his last day in Paris, Dan woke up late. He’d been out for drinks with other conference attendees the night before. He realized it was less than 24 hours before his flight back to the US and he’d barely seen the city.
“I can’t leave Paris without at least seeing the Eiffel Tower,” Dan thought. He dragged himself out of his hotel room, dressed in his conference-appropriate tie and shirt, and headed to the 7th arrondissement.

Waiting in line for the elevator to the top of the Eiffel Tower, Dan noticed a woman who met his eyes. The two smiled at one another.
This was Esther Wieland, a 23-year-old preschool teacher visiting from Zurich, Switzerland.
“I was by myself, and I thought a Monday morning would be not as crowded to go on the Eiffel Tower,” Esther tells CNN Travel today. “So I went sightseeing by myself and stood in line, and noticed him.”

“We were sort of weaving back and forth past each other,” recalls Dan.
The two temporarily lost sight of one another when an American family engaged Esther in conversation.

But as the elevator arrived at the top of the tower — the tourists spilling out to admire the city below — Dan and Esther spotted one another again.
The two separately wandered around the viewing platform, taking stock of the panoramic views of Paris and occasionally stealing glances at one another.
“I should talk to her,” Dan thought.

But would he attempt to speak French? What would he say? What if it was really awkward?
“If I talk to her, and it doesn’t go well, I’m by myself. No one in the world ever has to know,” he decided.

With that in mind, Dan politely approached Esther, asking, in broken French, if she would take a photo of him with the view.
“I had had a year of college French, so I didn’t know what I was saying,” recalls Dan.
“I couldn’t understand his French,” says Esther today. “So I said, ‘Can you repeat yourself again?'”

Embarrassed, Dan reverted back to his native language. Esther explained she was fluent in English.
“Dan seemed a little bit awkward when he spoke to me, which put me at ease,” recalls Esther. “And I liked his eyes.”

After she took the photo, the two started wandering around the viewing platform in tandem.
“We walked around the entire top of the tower looking at the views together,” says Dan.

For the next half an hour or so, the two walked and talked, admiring the city below. Then Dan asked Esther if she would like to get a coffee at the Eiffel Tower cafe.
Esther suggested they grab something to eat on the ground.

“I suggested lunch instead in part because it was lunch time and also I thought it might give us a little bit more time to talk,” Esther recalls.

“We had already indicated that neither of us really had plans for the rest of the day, so this was sort of like an adventure. And it was a beautiful day and I thought we could eat outside somewhere.”

Dan and Esther descended the tower together and found a pavement table at a nearby brasserie on the Place de l’Alma.

“We had a nice view of the Eiffel Tower from our table,” recalls Dan.
Over a croque monsieur and caprese salad, sipping first sparkling water and later espressos, the two continued the conversation they’d started on the viewing platform.

Esther explained she was in town visiting her aunt and uncle, who lived just outside of Paris. Dan told Esther about his studies back home in St Louis, as well as his four siblings. Esther talked about growing up as an only child, and her period working as an au pair in London.
“I was nervous a little bit,” says Dan today. “But the other thing too was I was just enjoying the day.”

“I felt comfortable,” says Esther. “It just seemed like we knew one another, it didn’t seem like it was the first time.”
After finishing up lunch, the two headed to the Jardin de Luxembourg together. Dan took a photo of Esther by Luxembourg Palace.

The two also asked a passerby to take a photo of the two of them together. Dan beaming in his blue shirt and tie, Esther smiling in a cream pullover.

They wandered past the imposing Medici fountain, past sunbathers enjoying the late summer sunshine, past rows of flowers enjoying a final bloom. Then Dan asked Esther if she would like to exchange addresses.
“Well, if I write you, will you write me back?” asked Esther.
“That was the first actual indication, really, that she actually was enjoying the day too, in a way, that she wasn’t just having pity on this poor foreigner who was wandering around Europe on his own,” says Dan, laughing.
Esther was catching a train back to her aunt’s house that evening, so Dan accompanied her to the Gare Salazar. On the platform, they scribbled their addresses and phone numbers on scrap pieces of paper.
“We thought that might be the last time we saw each other,” says Esther.
“I gave her a little kiss on the hand,” says Dan.

Dan took another photo of Esther as she stepped onto the carriage.
“We looked at each other as the train pulled away,” he recalls.
Afterward, he felt listless.

“It was kind of like a melancholy feeling, because I had such a great day, but we were sure that that was the end of it,” he says today.
On his way back to his hotel, Dan called into a store to look at postcards. He selected one with a photo of the Eiffel Tower on the front.

“I expect that for the rest of my life I will think of you whenever I see an image of the Eiffel Tower,'” Dan wrote to Esther, and posted it right away.
Then he called one of his sisters from a payphone, telling her about meeting Esther and the amazing afternoon they’d shared.

Meanwhile, Esther sat on the train, thinking about Dan.
“I just remember being sad, leaving with the train and saying goodbye,” she recalls today.
“There was no promise that we would ever see each other again, it was just that idea of, if I write to you, we’ll write each other back,” says Dan.