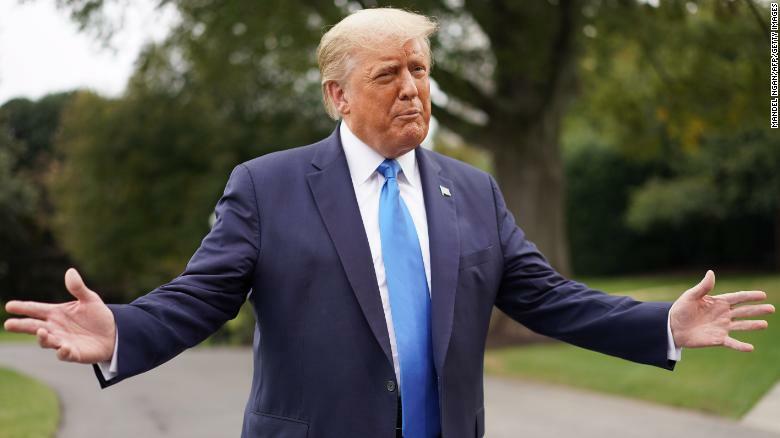 Donald Trump traveled to Florence, South Carolina, over the weekend to deliver the latest in a series of campaign-style speeches as he hints at running for president again in 2024.

With a shoutout to CNN’s Christian Sierra, I was able to get a transcript of the speech. The lines you need to see from it are below.

3. “We had a big victory. And we actually had an honest vote count.”

Trump won South Carolina by 12 points over Joe Biden in 2020. And he still hasn’t proven that there was widespread fraud in any vote count in the country.

4. “He abolished our southern border.”

There’s plenty of fair criticism of Joe Biden’s border policy — you can read some of it here. But one thing Biden didn’t do is “abolish” the border.

5. “Millions and millions of people, many of them from jails from other countries, are being dumped into our country.”

[narrator voice] No, they aren’t.

6. “There were more Covid deaths in 2021 then in all of 2020 and hospitalizations shattered every record even while Biden imposed illegal mandates all over the place.”

It’s true that there were more deaths attributed to Covid in 2021 than 2020. But it’s also worth remembering that Covid didn’t hit in full force in America until March 2020.

7. “You can take the five worst presidents in American history and put them together, and they would not have done the damage Joe Biden has done in just 13 months.”

Who are the five worst US presidents, you ask? According to C-SPAN’s 2021 survey of presidential historians, they are: James Buchanan, Andrew Johnson, Franklin Pierce, William Henry Harrison and — wait for it — Donald Trump.

8. “We have a president representing our country at the most important time in history, who is physically and mentally challenged.”

What evidence did Trump give that Biden is “physically and mentally challenged?” Oh, none.

9. “Russia would not have dared to annex one inch of territory if I was in the White House.”

It’s not at all clear that Trump can make this claim. While he has repeatedly insisted that no one had been tougher on Russia as president than he had, there’s little evidence to suggest that it’s true. Also, not for nothing, Russia meddled in the 2016 election to help Trump.

So, MAGA — or something?

[narrator voice] He doesn’t hate to tell you this.

12. “And you never want to use it, but the way you don’t use it is by letting everyone know that we have it bigger and better, stronger than they do.”

Donald Trump on the possibility of using nuclear weapons: “The way you don’t use it is by letting everyone know that we have it bigger and better, stronger than they do.”

15. “I have to tell you, not that you go back to your beautiful room and say he never even told me that.”

16. “So he knew everything we were saying, so don’t talk behind their back.”

In which Trump says he didn’t think President Xi spoke or understood English, but then realized he did. Good preparation!

17. “But actually, my personality is what kept us out of war.”

“Will someone from his depleted and food starved regime please inform him that I too have a Nuclear Button, but it is a much bigger & more powerful one than his, and my Button works!”” — Donald Trump to North Korean leader Kim Jong Un, in 2018.

18. “And Adam — Adam Kinzinger, you ever see him? He gets on television. He cries all the time. He starts crying.”

As far as I can tell, what Trump is referring to is the fact that the Illinois Republican congressman was near tears during a hearing with four police officers who were in the US Capitol on January 6, 2021. So, yeah.

19. “We call him Crying Adam Kinzinger.”

20. “We also have to clean out the rot of our failed foreign policy establishment.”

21. “We have to continue to drain the swamp. We did a lot of it, but the swamp was deep, deeper than anybody believed.”

The biggest swamp in the world is the Pantanal, which is on the border of Brazil, Bolivia and Paraguay. Information for life!

22. “You had somebody to talk to [Vladimir Putin] with me. Nobody was ever tougher on Russia than me.”

“I hold both countries responsible. I think that the United States has been foolish. We’ve all been foolish. We’re all to blame.” — Donald Trump on Russian meddling in the 2016 election. And, oh yeah, he was standing next to Putin in Helsinki when he said this.

Yes, he is still talking about crowd size. In particular, the crowd at a rally at the Montgomery County Fairgrounds on January 29 of this year. The Houston Chronicle said the crowd numbered in the “thousands,” although there was no mention of 50,000 people being turned away.

24. “So we made a lot of really great stars sitting there.”

I think Trump is saying that the people who sat behind him at campaign rallies became stars because they were on television. So, yeah.

25. “Now Biden is crawling around the globe on his knees begging and pleading for mercy from Saudi Arabia, Iran and Venezuela.”

Remember when past presidents would refuse to make any public comment about their successor? Good times. Gooooooood times.

26. “The woman that thought of the Green New Deal didn’t even go to a college to study.”

Trump appears to be talking about New York Rep. Alexandria Ocasio-Cortez here — who went to Boston University and graduated in 2011 with a degree in international relations and economics.

27. “The world is going to be destroyed because the oceans are going to rise 1/100 of an inch within the next 300 years. It’s going to kill everybody. It’s going to create more oceanfront property. That’s what it’s going to do.”

Trump is mocking climate change activists here. If you know literally anything about science, it’s not funny.

28. “The real threat we have is the nuclear threat. That’s going to be the global warming if we ever let that ever happen.”

See, because a nuclear bomb would cause a massive heat flash … so, global warming … [lays head down on desk].

29. “He must think we are the stupidest people.”

Apparently heavy oil — or “thick crude” — is a thing. Live and learn!

32. “I don’t think she ever took a course in the environment.”

And now Trump is back to Ocasio-Cortez. And, no, he likely doesn’t have a clue which courses she took in college.

34. “Then we had an election result that everybody or most people know was a fake result.”

Say it with me: There is NO evidence of widespread fraud in the 2020 election. NONE.

I’ll take, “rhetoric that can incite violence,” for $500 please, Alex.

36. “If he respected our president, it would have never ever happened.”

To be clear: Trump is saying that Putin wouldn’t have invaded Ukraine if he had been president because the Russian president respected him. Righto.

Trump on South Carolina Rep. Tom Rice, who was one of 10 House Republicans who voted to impeach him for his actions on January 6, 2021. For Trump, being laughed at is the worst thing the world.

39. “In the 1st Congressional District, you have another horrendous RINO known as Crazy Nancy Mace.”

Trump is really hard up for new nicknames. He has, in the past referred to Biden, Hillary Clinton, Nancy Pelosi, Bernie Sanders, Arnold Schwarzenegger and Maxine Waters as “crazy.” Now he’s doing the same for the South Carolina congresswoman.

Trump on Wyoming Rep. Liz Cheney. What’s weird is how normal this sort of rhetoric has become. In years past, a former Republican President saying anything close to this about a Republican member of Congress would have been news for days.

Read this on Trump’s much-bragged-about record in this month’s Texas primaries.

42. “The fate of any nation ultimately depends upon the willingness of its citizens to lay down — and they must do this — lay down their very lives to defend their country. If we allow the Marxists and communists and socialists to teach our children to hate America, there will be no one left to defend our flag or to protect our great country or its freedom.”

In which the former President of the United States says people should “lay down their very lives” to protect the country against … wait for it … critical race theory.

43. “It was fraudulent and loaded up with irregularities. In other words, it was rigged.”

[narrator voice] There is no evidence of widespread fraud in the 2020 election. None.

44. “So I ran twice, I won twice, and I did much better the second time that we did the first — getting 12 million more votes. And now we may have to run again.”

45. “Our election was rigged. And we can never let this happen again. And we will continue to go forward, but we will also never ever forget what happened.”

So, we need to looks backward and forward? At the same time?

What, exactly, would that sort of winning look like?