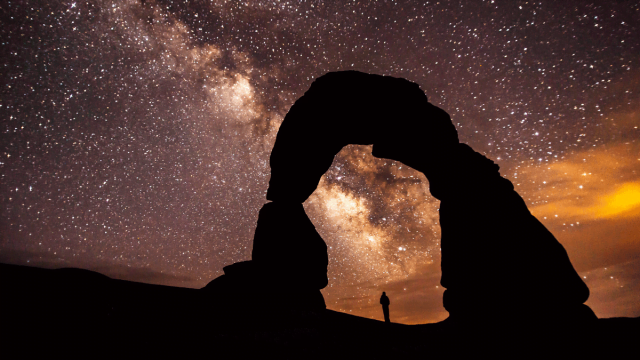 Ready to teach your kids about their place in the universe? Start by looking at the stars! From Arches National Park in Utah to Acadia Park in Maine, we’ve compiled a list of the best “Dark Sky Parks” where you and your little astronomers can go to gaze up at the heavens. So grab your binoculars, get to know your constellations, and get ready to feel the vastness of it all.

Known for its more than 2,000 delicate sandstone arches that tower toward the sky like magical red rock doorways, this park offers a plethora of easy to moderate hikes that visitors can explore by day—and a glorious sea of stars to gaze upon by night.

Insider Tip: Be sure to pick up a Junior Ranger Program from the park’s Visitor Center (or download it here), which gives kids fun activities to complete for the chance to win a ranger’s badge. The visitor center also sells “Explorer Packs” that contain binoculars, a hand lens, a naturalist guide, a notebook, and activities to inspire exploration.

By Night: Since it has minimal artificial lighting (there’s light at one administrative area by the highway and “sky-friendly lighting” for safety at a few spots around the park), Arches offers some of the darkest skies in the contiguous 48 United States. According to the NPS, a pair of simple binoculars on a moonless night here may be enough to see even the rings around Saturn! Arches occasionally offers ranger-led stargazing events, so keep an eye on the website to find out when one might be planned. Otherwise, the best spots to see the stars include*:

*All of these spots offer parking areas, so you don’t have to be camping to enjoy the views. Just pull up, turn off your lights, and look up. (You can stay by your car or walk a short distance into the park to get a more isolated view.)

Best Time of Year to Go: Spring or fall. Note: You’ll see the most stars during the new moon or when the moon is below the horizon, so plan your visit accordingly. Check sunrise and sunset times and moon phases at discovermoab.com.

Related: Your Guide to Mastering Astronomy with Kids

A post shared by Maine Photography | Portland, ME (@jackbjornphotography)

With its low humidity, high elevation, and 77,000 acres of untouched wilderness, this stretch of land offers stunningly dark skies and some unique ways to view them.

By Day: Take a drive on the aptly-named “Scenic Drive,” a 12-mile road that ascends 4,000 feet that passes through so many specific ecosystems that the NPS calls it the ecological equivalent of driving from Baker, Nevada, to the frozen Yukon, thousands of miles to the north. Once you’re at the top, take a hike on the easy, quarter-mile Island Forest Trail, which weaves around creeks and meadows through the alpine forest.

Want to go deeper? Book a ranger-led tour of the Lehman caves, an underground wonderland that was formed millions of years ago. (You can take a virtual tour here to get a taste of what to expect). Families with small children or kids who are afraid of the dark may want to think twice since the caves are only dimly lit (and visitors are advised not to touch the cave walls, which may be tough for tiny explorers). Tip: Families may want to opt for the 30-minute Gothic Palace Tour, which offers a look inside one of the larger “rooms” (stalactites and stalagmites galore!) without the longer time commitment.

By Night: Kids can peer through telescopes during weekly astronomy programs held by the park’s “dark rangers.” These star programs are generally held May through September on Saturday nights, as well as Thursday nights between Memorial Day and Labor Day. There’s also a Perseid meteor shower-watching party in mid-August, where you’ll be able to see hundreds of shooting stars per hour!

Want something totally different? Take a ride on the “Star Train,” one of the coolest stargazing opportunities we’ve seen yet. This popular train travels into the park from the nearby city of Ely with rangers on board to point out all the wonders of the night sky. Passengers also get to hop off the train and take a look through telescopes to get a closer view. All trains for 2023 are already sold out (!!), but keep an eye on the website in case there are any cancellations. You can also still get a ticket on the “Sunset, Stars and Champagne” train ride, which leaves at sunset and comes back late enough at night to give riders a starry night show.

Known for its otherwordly mountains and canyons of layered rock—as well as the grassy prairies surrounding them—this 244,000-acre park is home to bison, bighorn sheep, prairie dogs, and black-footed ferrets. Located about an hour from Rapid City, it is also a rich fossil site, and littles will love seeing evidence of the park’s long-ago residents as they make their way on the trails.

By Day: Take a drive on Badlands Loop Road, which takes you past 15 scenic overlooks to see the park’s majestic views. As for hikes, we recommend the easy 0.25-mile Fossil Exhibit Trail, a lazy walk where kids can learn about the different fossils found in the area.

Pssst: Badlands has an “open hike” policy, which means hikers are allowed to go off the trail. For kids, this means rock scrambling is totally OK! (Just keep an eye that nobody is getting near any steep drop-offs.)

By Night: The park offers special Night Sky Viewings every night in August and September. At these viewings, park rangers and volunteers use laser pointers to show and describe different constellations, planets, and other objects in the night sky. Spectators are also welcome to use the park’s 11-inch Celestron telescopes to get an even better look at the night sky.

Pssst: Be sure kids pick up a Night Explorer Junior Ranger Booklet from the Ben Reifel Visitor Center so they can complete it and earn a Junior Ranger Badge!

Best Time to Go: Late spring and early fall (summers can get hot and crowded)

Located in an isolated desert canyon about three hours from Albuquerque, this UNESCO World Heritage site was the hub for the Chacoan culture between 850 and 1150 AD. A testament to the ancestral Puebloan people’s complex engineering abilities, many of the ancient stone houses, petroglyphs, and other structures still stand strong, and visitors can still meander through their ancient doorways and corridors.

By Day: Kids can play archeologist as they walk around the red stone walls and hallways that connected this ancient center. On the surrounding trails, which offer expansive views from higher mesas, keep an eye out for the area’s natural inhabitants, including elk, deer, bobcats, rabbits, badgers, porcupines, bats, snakes, and lizards. Stop at the visitor center to pick up a junior ranger booklet so kids can earn a junior ranger badge by learning more about ancestral Pueblo life.

By Night: Chaco Canyon is one of only two national parks with its own observatory, offering views into deep space and a digital imaging system that gives visitors views of distant nebulas and galaxies (open weekends through the summer and on special occasions in the winter). Evening campfire talks and night sky programs are usually held April through October, and give visitors a chance to look through high-powered telescopes and learn about the stars’ crucial role in Chacoan culture*. There are also full moon walks through the ruins as well as walks held on solstices and equinoxes.

Staying the night? There is no lodging within 60 miles of the park, so you’ll have to drive an hour to get to a hotel, or stay at one of the park’s campsites (worth doing, since this is one the darkest skies in the American Southwest!).

*As of this publication, the ranger-led night sky programs have been suspended until further notice.

Best Time of Year to Go: Spring or fall.

This expansive stretch of desert—the 12th largest national park in the country—is located on the southwestern border between Texas and Mexico. Despite the fact that it is the largest of North America’s four deserts, it is brimming with life due to being carved out by the “big bend” of the Rio Grande river that gives the park its name. The park’s menagerie of animals includes more than 450 species of birds, 75 species of mammals, 56 species of reptiles, and 11 species of amphibians. But all that’s nothing to the number of stars visible on a clear, moonless night.

By Day: Hikes around the nearby canyons and within the Chisos basin range from very easy to challenging (the park is known to have an active bear and mountain lion population, so parents are urged to use extra caution if hiking up into the mountains and foothills, where these animals tend to live). We recommend the 0.3-mile paved “Window View” trail around the Basin store, which is perfect for littles.

If you’ve got kids over 4, consider “floating” the Rio Grande by way of raft or canoe. Trips can be arranged by outside outfitters including Big Bend River Tours and Big Bend Boating and Hiking Company. If you’re adventurous and everyone in your crew has a passport, take a five-minute row boat ride across the Rio Grande to the town of Boquillos Del Carmen, a quaint village that ParenthoodandPassports calls “the safe Mexico border town a boat ride away.”

Note: Be sure to stop at the Panther Junction visitor center when you arrive at the park, where rangers can help you plan your day, tell you about any road closures, and give your kids Junior Ranger activity booklets.

By Night: This international dark-sky park has the least light pollution of any park in the lower 48 states. On a clear night, visitors can see the Andromeda Galaxy, two million light years away! Consequently, the park offers several types of night sky programs throughout the year, with dedicated “night sky rangers” there to teach visitors about all things far, far away.

To stay overnight in the park, you must have a room at the Chisos Mountains Lodge, a reservation at a campground, or a permit for a primitive backcountry campsite. All of these are often booked up to six months in advance, so plan early! Go to Recreation.gov to reserve campgrounds and backcountry campsites.

Best Time of Year to Go: Late fall through early spring (the rainy season is June through October, and summer days can be too scorching hot for safe hikes).

Located just a few miles from the Canadian border, this massive park is filled with rich forests bound by interconnected waterways. At night, millions of stars light up the sky, with the occasional glimmer of the Aurora Borealis blazing through the darkness.

By Day: Much of Voyageurs is only accessible by boat. From June through September, the park offers guided boat tours or ranger-led programs that will give you an inside look at the plants and animals that call this park home—including otters, bald eagles, moose, beavers, and wolves.

By Night: With its lack of light pollution and remote location, this park is as dark as it gets, with mesmerizing views of the Milky Way, the planets, and millions of stars—as well as the occasional dance of the Aurora Borealis. Basically, anywhere you go within the park on a cloudless night will offer spectacular views, though the NPS recommends the Voyageurs Forest Overlook, Beaver Pond Overlook, and the Kettle Falls Dam as the most popular stargazing locations.

Best Time to Go: Summer and early fall (when the leaves change!)