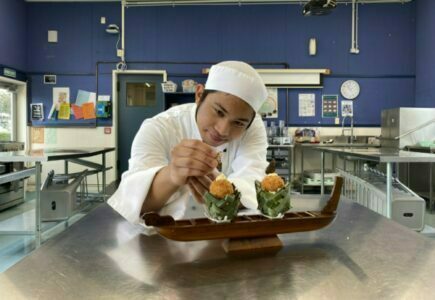 Varick started teaching himself to cook five years ago by beginning with the basics.

While he doesn’t have as much time to cook these days due to being in his final year, with work and school obligations, he cooks at the weekends if he has free time for himself and his father.

He told the Times he usually goes for barbeque or slow-cooked meat: beef, pork and lamb.

“My favourites are a scotch fillet steak, some good ribs or a slow-cooked lamb shank that’s been braised for hours,” he says.

His food technology teacher Caroline Jeyachandran asked him earlier this year if he wished to compete in the Australasian Tapas Championship, a nail-biting event that saw 30 talented chefs from both sides of the Tasman fire up their cook tops and battle it out for the grand title.

The winner will represent Australasia in the final of the sixth World Tapas competition in Spain on November 6 with the hope of being crowned the world’s best tapas chef.

“One of the main goals for the dish was not only to use ingredients (and fish) from New Zealand but to also let people know these ingredients can be used to make amazing dishes, ingredients people wouldn’t usually consider using,” Varick says.

Another main point of the dish was sustainability. All of the fish was used, Caroline says: the bones were used for stock, and skin of the fillet to make crisps.

“Whilst I only got a participation award, I think the more important take away from the competition is that I learned a lot from observing the other chefs and the dishes that they came up with,” Varick says.

“I’m sure to take it as a valuable learning experience for when I go to university.”

Varick has been accepted into Auckland University of Technology (AUT) for culinary arts.

“He’s gained all the skills and is ready for the industry,” Caroline says.