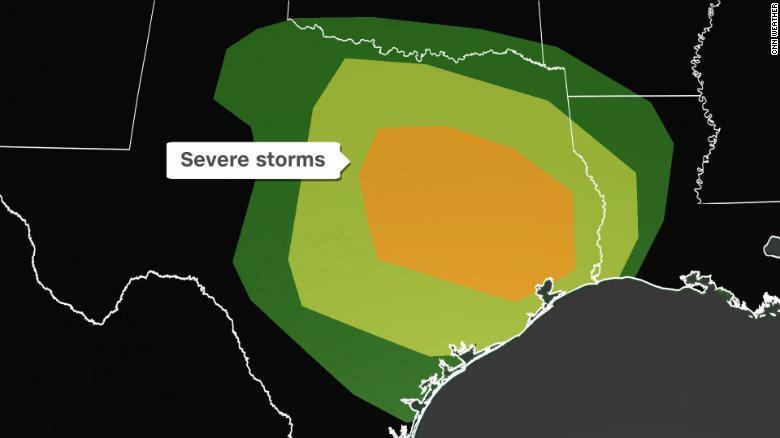 A multiday, severe storm outbreak is forecast across the South this week 01:32

A potent low pressure system sweeping across the Intermountain West Sunday will become the catalyst for a multiday severe weather outbreak this week across the Southern Plains and Gulf Coast region.

Beginning Monday, more than 20 million people along the Gulf Coast could be affected by damaging winds, very large hail, and tornadoes. 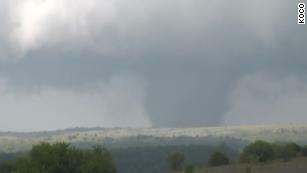 A Level 3 out of 5 “enhanced” risk for severe storms has been issued across portions of Texas and Louisiana by the Storm Prediction Center (SPC), and includes Houston, Austin and Waco, Texas.

A Level 2 “slight” risk surrounds the enhanced risk and includes San Antonio and the Dallas-Fort Worth area. 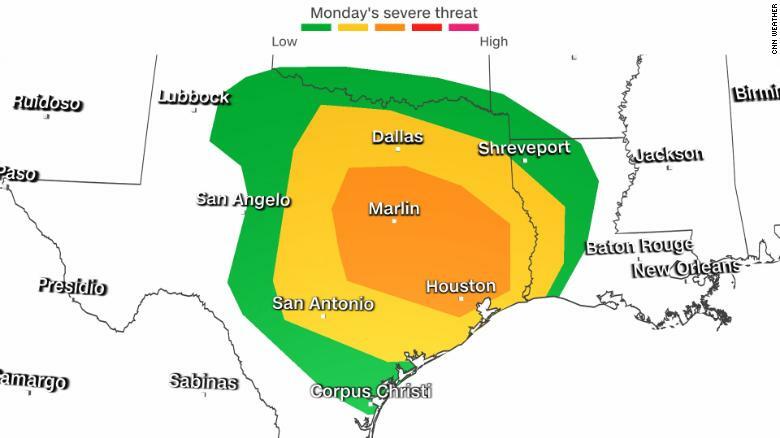 For the Ark-La-Tex region, the threat of tornadoes increases going into the evening hours. Tornadoes occurring at night are more than twice as likely to be deadly as those during the day.

When tornadoes occur during the day, people are awake, alert, and make a conscious effort to seek out weather alerts. At night, it is a different story. It is imperative to be sure you have a weather radio, weather app on your phone or any other alerting system to wake you up if you live in an area expecting severe storms overnight.

By Tuesday the threat for severe weather increases as it shifts further east. The potential for strong tornadoes, hail, and damaging straight line winds exist from Lafayette, Louisiana, east into Huntsville, Alabama.

A Level 4 out of 5 “moderate” risk for severe storms has been issued across portions of Louisiana and Mississippi by the SPC, and includes Baton Rouge, Louisiana, and Jackson, Mississippi.

Nighttime tornadoes will also be a concern Tuesday evening as well for areas of Alabama, southern Mississippi and the western panhandle of Florida.

Wednesday, the focus becomes an area between Mobile, Alabama and Columbia, South Carolina. 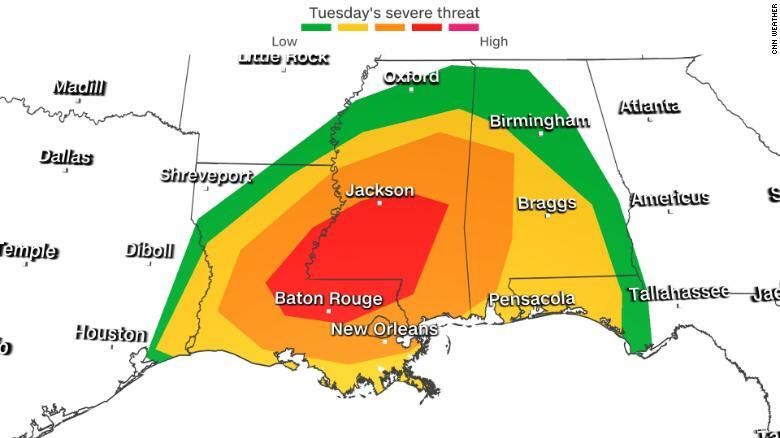 Warm, moist air will surge in from the Gulf of Mexico ahead of the advancing cold front, increasing the potential for flooding as well.

“Rainfall totals greater than 2 inches are possible and could create rapid runoff and flooding issues.” the Weather Prediction Center said.

While most areas of the Southeast will pick up between 1-3 inches of rain, isolated spots could see as much as 4 inches through Wednesday.

Texas could use the rain

Texas has been ravaged by fires during the past week along with worsening drought conditions in recent months. More than 90% of the state is now in drought, according to the US Drought Monitor update released Thursday morning.

But before the much-needed rain arrives Monday, low humidities and gusty winds ahead of the cold front will bring an increased fire threat. 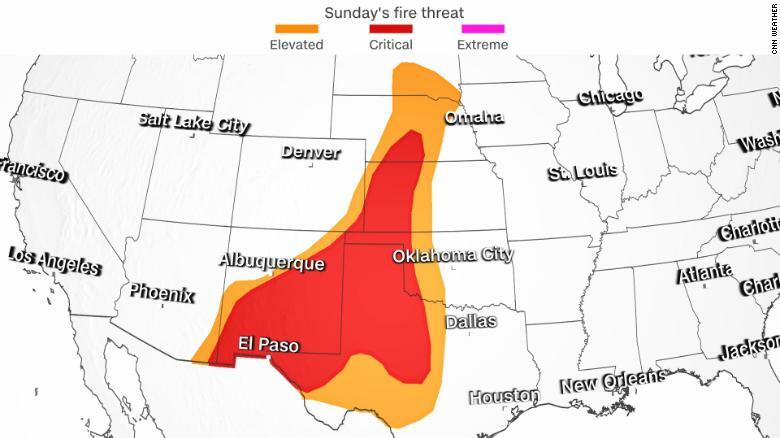 Widespread sustained winds of 20-25 mph are expected across the region, with gusts as high as 45-50 mph. Minimum relative humidities will drop to 10-15 percent by Sunday afternoon.

While rain is set to arrive Monday, it cannot come soon enough. Most of the panhandle of Texas has not seen significant rainfall for much of the winter, largely preventing the normal March “green-up” and leaving areas with a large, dry fuel load, simply meaning the drier plants are more likely to burn.