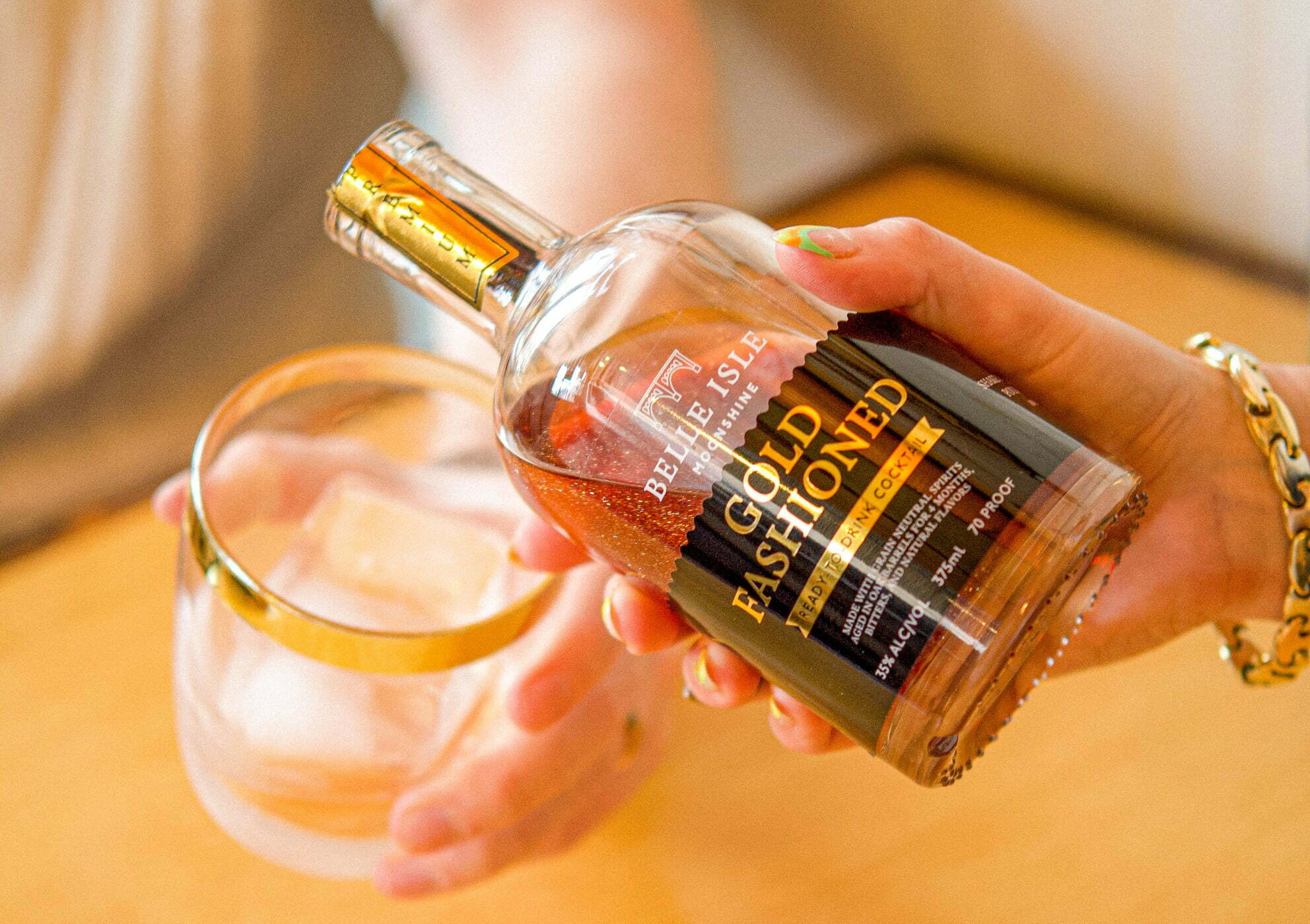 This take on the classic old fashioned has a surprising—yet very on-brand element—edible glitter. Suitable for sipping at home or taking to a shindig, Gold Fashioned shines as its poured and shines as its downed. While an old fashioned is typically crafted using bourbon or whisky, Belle Isle uses its barrel-aged moonshine as well as bitters, orange and cheery to achieve the classic taste.

The challenge with distilling whisky and bourbon is the amount of time it takes to age a product, which can take years. Belle Isle’s aged moonshine, however, takes a minimum of four months to be ready for bottling as Gold Fashioned. Belle Isle’s first batch of the product, however, had been aged for eight months.

“While we can’t call it a bourbon because our distillation point is different from a bourbon, it really has all of the characteristics of what a bourbon typically does,” says Brandon Day, Belle Isle Moonshine’s director of marketing. “Honestly, it took a long time to bring to market because we really wanted to get the taste right — especially if we were going to impress folks who were kind of your classic bourbon or old fashioned drinker.”

The gold glitter came as a suggestion by Belle Isle’s production manager as an afterthought for the product. With a “let’s just do it” attitude, the distillers found an ingredient that wouldn’t change the taste of the product.

“Bell Isle is never going to be for the serious drinker,” Day says. “So like, how can we add our fun, cheeky twist on it?”

The launch of Belle Isle’s Gold Fashioned also opens up another line of business for the craft spirit business: bottled cocktails. The local Richmond distillery sells its bottled moonshine products at its distillery and through ABC and also has a line of canned cocktails that are sold at bars, restaurants, grocery stores and even some convenience stores.

But Gold Fashioned is different.

“It’s really going to help us to explore and innovate in new ways because once you get the science behind a certain format, you can kind of replicate that and then do a bunch of different iterations on that,” Day says. “That’s what folks can expect from us.”

Gold Fashioned can only be sold through ABC-controlled facilities, and it’s currently only being carried at Belle Isle’s distillery. Gold Fashioned also showcases a new bottle size for Belle Isle at 375 mL, compared to the brand’s flagship 750 mL bottles of moonshine. Belle Isle has a small tasting room open now, but it also recently announced that it’s working on a full build-out on the other side of the building that will be a fully functional bar.

it’s officially opening a tasting room, so consumers will have a chance to try a range of moonshine products. A launch date hasn’t yet been announced.

The idea behind the bottled cocktail is to also save space and effort for moonshine drinkers and bartenders alike. It’s a product you can keep on your bar or your fridge, and when it’s time to go to a party you can just throw it in your bag instead of traveling with a whole bar setup, Day says.

“Now I just bring this one bottle and pour it over ice,” Day says. “It’s really tasty, and not exactly what people would expect from a premade or ready-to-drink cocktail.”