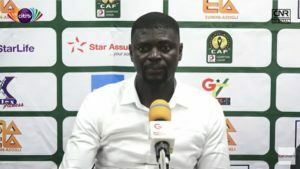 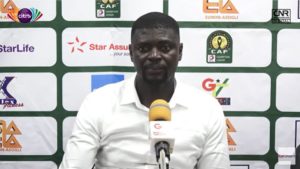 Vincent Sowah Odotei, a board member of Hearts of Oak has slammed former coach Samuel Boadu for his conduct at the Accra Sports Stadium before the kick-off of the game against AS Bamako in the CAF Confederation Cup.

Boadu was spotted in the inner perimeter and did a lap of honor rallying support and sand with the fans as the team prepared to overturn a 3-0 first-leg defeat.

His actions have now been described as ‘distracting’ by Sowah Odotei, who claims the board takes ‘serious exception’ to Boadu’s behavior.

“We take exception to what he did, by getting into the inner perimeter. We don’t know how he got there,” he told Joy Sports.

“He claims that he loves the club but what he did would have distracted the players. The board takes strong exception to what he did because it’s never been done anywhere. I’ve never seen anything like this.

“I hope that he will not repeat that under any circumstances,” he concluded.

The former Medeama SC boss was sacked in September 2022 after a slow start to the 2022/23 Ghana football season.

Boadu’s sacking came just 12 days before Hearts of Oak’s first game of the CAF Confederation Cup game against AS Bamako.

The decision proved unpopular among the fanbase, and the club subsequently lost the tie 3-1 on aggregate. They lost 3-0 in Mali and won 1-0 at home.