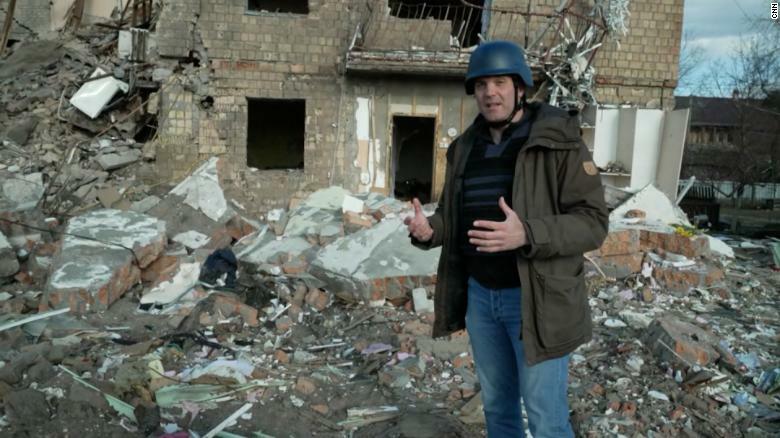 Russia said it would “drastically reduce” its military assault on the Ukrainian cities of Kyiv and Chernihiv after talks took place between representatives of the two nations on Tuesday that appeared to show signs of progress towards an off ramp to the conflict.

The announcement comes after Ukrainian and Western intelligence assessments suggested in recent days that Russia’s advance on Kyiv was stalling.

Fomin told reporters that the ongoing discussions regarding the “neutrality and non-nuclear status of Ukraine” had contributed to the decision. More details on the steps to reduce hostilities will follow after the Russian delegation returns from Istanbul, Fomin said in remarks carried by Russian state news agency TASS.

Despite the announcement, intense fighting continued around the suburbs of Kyiv on Tuesday afternoon, especially in the northwest and northeast of the city.

Ukraine echoed the announcement regarding the reduction in military action, saying some Russian troops were pulling back from Kyiv and Chernihiv.

“The Russian enemy did not meet the goal of its offensive operation,” the General Staff of the Armed Forces of Ukraine said in an official Facebook update Tuesday, adding that “certain units” of Russia’s military were withdrawing from battlefronts in the cities.

However it warned of a “high risk” of Russian troops attacking military and civilian infrastructure.

The Russian military, it claimed, was struggling to reinforce and rotate in new soldiers, due to the “refusal of personnel to participate in the so-called special operation,” and are “not able to staff even one battalion-tactical group.”

Brig. Gen. Kyrylo Budanov, the head of Ukraine’s Defense Intelligence Agency, said Russia’s operations around Kyiv had failed and it was now impossible for the Russian army to overthrow the Ukrainian government. Putin’s war is now focused on the south and the east of the country, he said.

“There is reason to believe that he is considering a ‘Korean’ scenario for Ukraine,” said Budanov. “That is, [Russian forces] will try to impose a dividing line between the unoccupied and occupied regions of our country. In fact, it is an attempt to create North and South Korea in Ukraine.”

Still, enough progress was made during Tuesday’s talks between the Russian and Ukrainian delegations to allow Putin and Zelensky to meet, Ukrainian presidential adviser Mykhailo Podolyak said.

Speaking in Istanbul after the talks between the two sides ended, Podolyak said there was now a “likelihood” that the two presidents may meet. “We have documents prepared now which allow the presidents to meet on a bilateral basis,” he said.

He referred to talks about the status of Crimea, annexed by Russia in 2014.

“It was agreed in bilateral format to take a pause for 15 years and conduct bilateral talks on the status of these territories (Crimea and Sevastopol),” he said.

Ukraine and the West have refused to recognize the Russian annexation of the Crimean peninsula, and the pause could be a formula for taking the issue off the table for now.

Podolyak added that they had separately discussed that “no military hostilities” take place over those 15 years.

The issue of security guarantees was also discussed. Another member of the Ukrainian team, Davyd Arakhamia said, “We insist that this be an international treaty, signing all the guarantors of security, which will be ratified.” This would be comparable to NATO’s Article 5, which enshrines the principle of collective defense, he said.

Podolyak also said that both sides are still “discussing a humanitarian ceasefire,” stressing there are “many places where humanitarian corridors are needed.”

Over 3.9 million refugees have fled Ukraine since the start of the war, according to UNHCR.

Chernihiv, which lies about halfway between Kyiv and the Russian border, has endured intense shelling in recent weeks. Videos geolocated show heavy damage in civilian areas.

On Saturday, Chernihiv Mayor Vladyslav Atroshenko announced the city was surrounded by Russian forces, leaving no safe pathways in or out.

On Tuesday that between 300 and 400 people, mostly civilians, had been killed in the last three weeks.

“We don’t have the exact figure because we can only count those who died in a hospital, but if people die from an explosion, we cannot always identify them,” Atroshenko said.

The United States also believes Russia is executing a major strategy shift and withdrawing some forces from the area around Kyiv, two senior US officials told.

The Russian forces are now pulling back in some areas of the north to focus on gains in the south and east, the US believes. The US has already observed these movements underway, including Russian Battalion Tactical Groups (BTGs) leaving the surrounding areas around Kyiv, according to the US intelligence.

In the US view, this is not a short-term adjustment to regroup, but a longer-term move as Russia comes to grips with failure to advance in the north.

The US assesses Russia will cover their retreat with air and artillery bombardment of the capital, one of the officials said. US officials caution that Russia could always reverse again if the battle conditions allow.

Russia’s suggestion of a reduction in its military action was met with cynicism in the West.

US Secretary of State Antony Blinken said he had not seen signs the talks between the two sides were “moving forward in an effective way.”

The UK agreed with those sentiments, with Prime Minister Boris Johnson’s spokesman saying on Tuesday that Britain will judge Russia by its actions rather than words and that they do not want to see anything less than a “complete withdrawal” of Russian forces from Ukrainian territory.

Meanwhile, Turkey’s Foreign Minister Mevlüt Cavusoglu said “consensus and common understanding” was reached between the opposing delegations on some issues, hailing progress made in particular on the “top priority of achieving a ceasefire as soon as possible to pave the way for a permanent political solution.”

The “trickier” issues are now to be discussed at higher levels, with a meeting between the Russian and Ukrainian Foreign Ministers to “make final adjustments to the common approach,” he said.