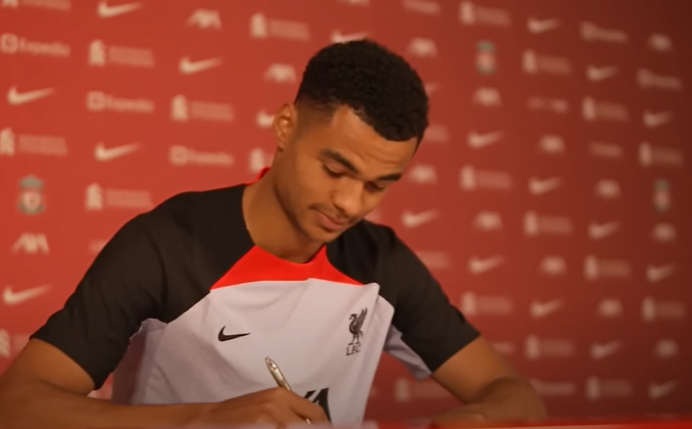 The Netherland’s World Cup star has been earmarked as Erik ten Hag’s No.1 target ahead of the January window, with the United manager desperate to sign a a striker in the wake of Cristiano Ronaldo’s acrimonious departure.

Liverpool, however, stole a march on their rivals and have completed a deal for the 23-year-old, which cost as much as £45million, before the transfer window officially opened.

Subsequent reports have indicated that United’s scouting department were not entirely sold on Gakpo’s abilities to lead the line, but Dutch football legend De Boer believes Liverpool have signed an exceptional talent who will benefit greatly from Klopp’s tutelatge.

He told talkSPORT: ‘I’ve seen him now for a couple of years already, he has great potential.

‘He has the ability to score easily with his right foot coming in from the left to the right, he has the speed, the dribbling and I think his mind is also very good.

‘When I see him and when he talks on television, he looks to be a very clever boy, he knows what he wants, he still has a lot of potential to grow to be an even better player.

‘His potential for me, he’s one of the biggest talents in Holland.’

Gakpo’s versatility and ability to play across the front line will be of huge benefit to Klopp who is still searching for the best way to compensate for the loss of Sadio Mane in the summer.

De Boer added: ‘I think it’s important for him, he’s better when he starts on the left and comes inside. I think Liverpool plays a little bit like that, I remember [Luis] Diaz playing there, who is also by the way an exceptional talent.

‘So when he is fit he will have to fight for that spot. In the meanwhile, he [Gakpo] can grow in that role, I think Liverpool needs a player like that on that side at the moment. I think for me, this is the best choice he could have made at this moment.’

Commenting on whether Gakpo has the capability to start up top, De Boer remarked: ‘I think he can play as a No9, but with two strikers. Not a typical No9 like [Robert] Lewandowski, I don’t think he’s that kind of type.

‘But if you play with two up top, then he can play as an attacking No10, he can play that role really well, he did it of course at the World Cup where he showed his class.

‘With two strikers he can be very efficient, he knows where to run, he knows to go behind the defenders and he has the speed. He will also get a little bit quicker and more physical, that will come in the years of playing in the Premier League, he will adapt quickly.

‘I think he will only get better, and from my point of view, he made the right choice.’


MORE : Why Cody Gakpo’s Liverpool debut could be delayed