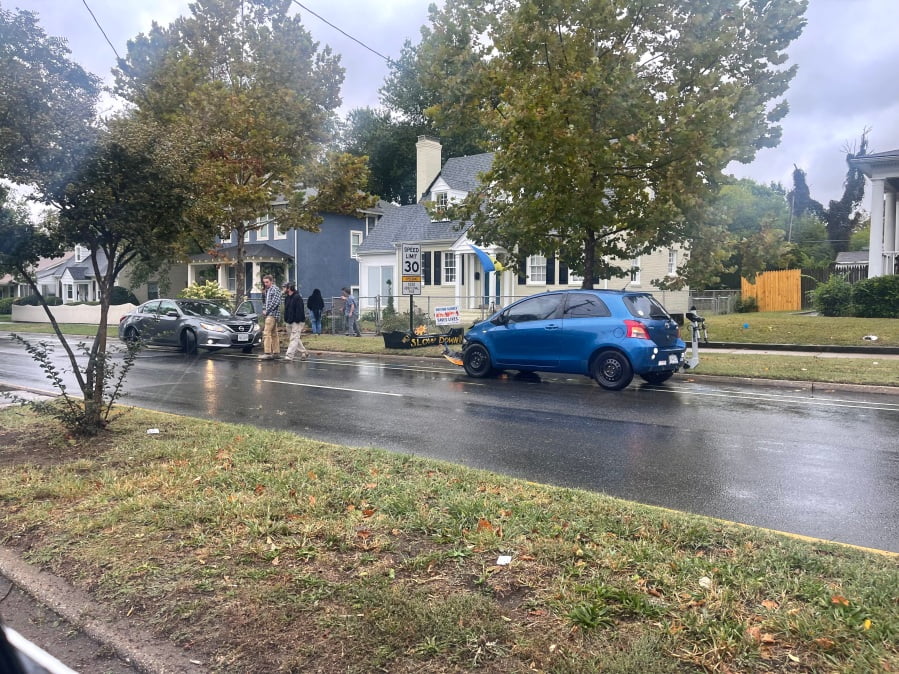 RICHMOND, Va. (WRIC) — Richmond residents living near Semmes Avenue are speaking out, concerned about chronic speeding on a major road connecting downtown to Forest Hill Park and other areas of Richmond’s Southside.

Between Cowardin Avenue and Forest Hill Avenue, the speed limit is 30 mph, with posted signs designating the area as a higher-fine zone. But those who live nearby told 8News they are concerned for their safety.

“In between these traffic stops, these cars hit 70 and 80 miles an hour, and I’m not being facetious about that. They go so fast,” long-time resident Sonny Bowyer said. “Not everyone does, but so many of them do, and particular the motorcycles and motorbikes, and they make more noise.”

Bowyer has lived on Semmes Avenue for nearly 50 years and has witnessed drivers’ behavior changing throughout the decades.

“Traffic has speeded up a lot and has gained in intensity,” he said. “More people are working downtown and driving down Semmes Avenue, crossing the Lee Bridge, crossing the Manchester Bridge.”

Bowyer said he no longer feels safe crossing Semmes Avenue, and instead has taken to walking on the back streets, when possible. That sentiment was echoed by other neighbors in the area, who said they had witnessed multiple crashes in recent days.

“We have seen numerous crashes at this intersection,” Bowyer said, referencing the cross streets at Semmes Avenue and 32nd Street. “Having seen so many accidents, I’m really concerned that, somewhere along the line, somebody’s going to crash into our house.”

Residents told 8News that more needs to be done to cut down on the speeding and other unsafe driving behaviors on Semmes Avenue, including increasing police patrols in the area. 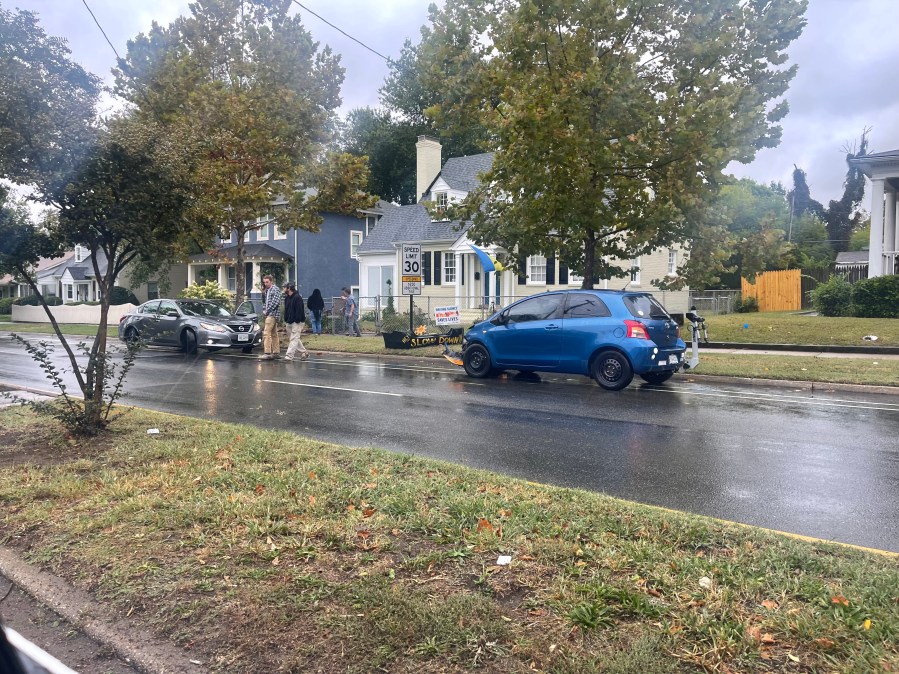 The aftermath of a crash on Semmes Avenue in Richmond’s Southside. A sign made from a car bumper that reads, “HEY! SLOW DOWN!” can be seen in the background. (Photo: Sonny Bowyer) 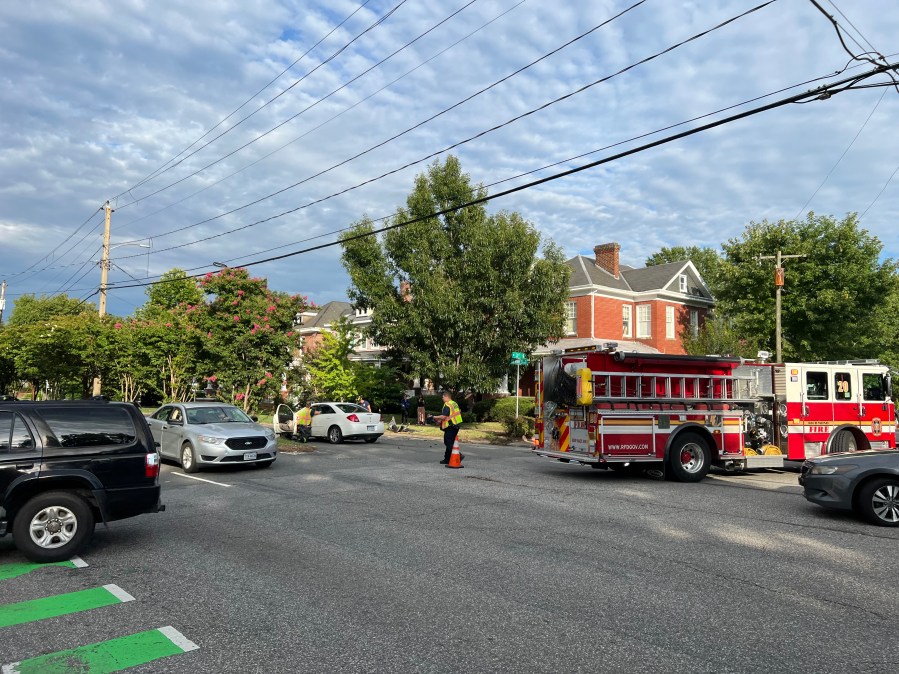 Richmond Fire at the scene of a crash on Semmes Avenue in Richmond’s Southside. (Photo: Tyler Thrasher) 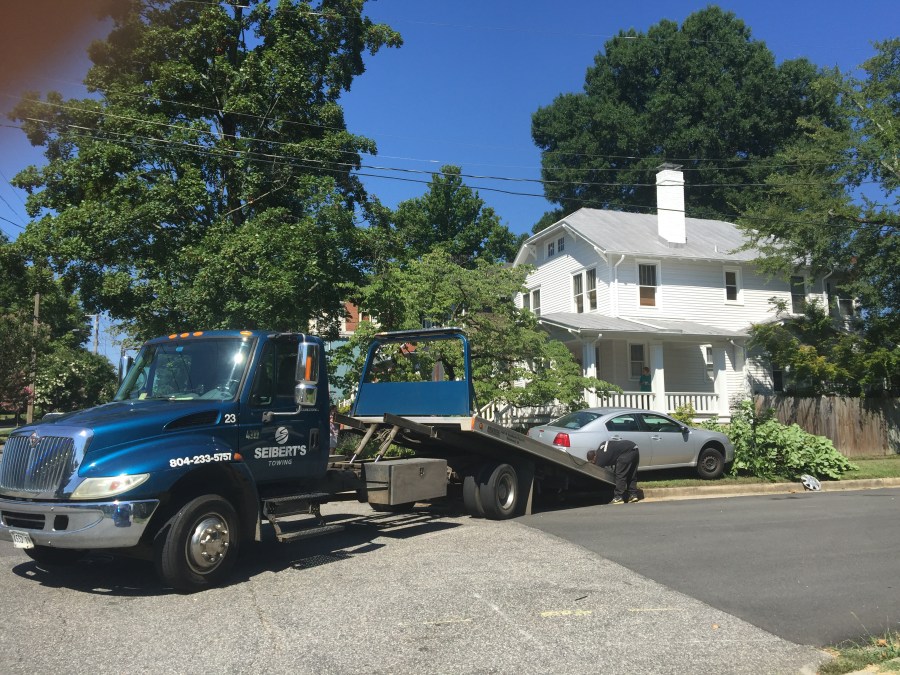 A tow truck picking up a car that ran off the road on Semmes Avenue in Richmond’s Southside. (Photo: Sonny Bowyer)

8News also reached out to the City of Richmond Transportation Engineering Division for additional information regarding signage, speed calming measures and steps being taken to reduce traffic crashes in the area, but is waiting for a response.

“I may see a police [officer] pull someone over maybe once a week,” Bowyer said. “But if they were sitting, invisible, on 32nd Street, they would be busy all day long.”

In addition to the higher-find zone signs installed by the city, residents have taken to posting their own signage, urging drivers to slow down and reminding them of the impacts of unsafe driving behaviors.

A spokesperson for Richmond City Councilmember Stephanie Lynch, whose district encompasses the area of Semmes Avenue in question, noted that local leaders would like to expand speed enforcement cameras to that stretch of road, but would need a third party to do so, something not currently approved by the General Assembly.

It is shameful that drivers are speeding down our neighborhood streets as if they were highways and interstates. The increased speeding behavior, particularly on commuter routes like Semmes Ave., Bainbridge, and Midlothian Turnpike should call us to think differently about traffic calming infrastructure. I want to see bold steps in narrowing the roads and adding infrastructure to support pedestrians, bicyclists, and public transport, as well as speed enforcement. Our neighbors would like to see drivers drive like they live here — our residential streets should not be expressways.

October is the most dangerous month to drive in Virginia, according to the DMV

Semmes Avenue does have crosswalks, sidewalks and bicycle lanes, but Bowyer noted that he has seen high-speed crashes result in vehicles coming up onto the curbs.

“I understand that they can’t put speed bumps in because of the fire station down at the bottom of Semmes Avenue, because they’ve got to respond and they can’t be going over bumps,” he said. “But I have seen signs that say, ‘This is a strict, 30 mph corridor, and if you go faster than that, you’re going to be ticketed.’ It needs to have something with some bite to it that makes people realize this is serious and you cannot be speeding.”

8News reached out to RPD last Tuesday for information on the number of speeding tickets issued in all of 2021 and so far in 2022, but has yet to receive a response with that data.

In recent weeks, residents, together with Councilmember Lynch’s office, have formed the Semmes Avenue Safety Committee to address traffic and speeding issues in the area.

“Everybody’s concerned about the speed of the traffic,” Bowyer said. “There are cars that actually hit 80 miles an hour on Semmes Avenue. It’s breathtaking. It’s unbelievable.”