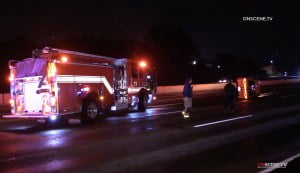 The disturbance that produced showers overnight in San Diego County was predicted to move east on Monday, setting up a period of Santa Ana winds, the National Weather Service said.

The showers caused traffic tie-ups in the early morning hours Sunday, including a vehicle flipping on state Route 94 in Chollas View and a two-vehicle crash near the transition from Interstate 805 to state Route 54 in National City.

“The weather system that produced our strong onshore flow, and consequent showers overnight, will move east on Monday,” the weather service said, “setting us  up for a brief bout of Santa Ana winds.”

High temperatures on Monday are predicted to be in the mid 70s along the coast, mid 70s in the western valleys, upper 60s near the foothills, upper 50s in the mountains and mid 70s in the deserts.

Fire weather conditions were predicted to be elevated Monday in the windier pass areas, and could even be briefly critical around midday where little to no rain has fallen. Winds may weaken on Monday afternoon, and good relative humidity recovery was expected for Monday night, with further recovery Tuesday.