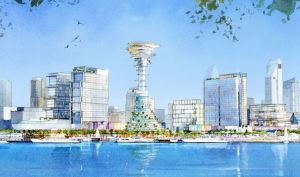 Port of San Diego commissioners have authorized staff to begin the environmental review process for the Seaport San Diego project proposed by 1HWY1 for redevelopment of the central embarcadero.

“This site is unlike any other along our San Diego Bay and advancing the proposed Seaport San Diego project to environmental review is a good step forward,” said Port Chairman Dan Malcolm on Tuesday. “The central embarcadero has tremendous potential to become San Diego’s signature waterfront destination. “

“We are overjoyed at the opportunity to enter a new phase of the approval process and grateful to our supporters who have been with us every step of the way,” said Yehudi Gaffen, CEO of 1HWY1. “Seaport San Diego is designed to keep the best of what we have and reflect the community’s wants and needs, with greater public access to the waterfront for everyone.”

In late 2016, the Board selected the 1HWY1 development team following a competitive solicitation and due diligence process. Since then, 1HWY1’s proposed Seaport San Diego project has evolved in response to board, public, and stakeholder feedback.

The environmental review process that now begins will 24 months or longer and include public feedback.