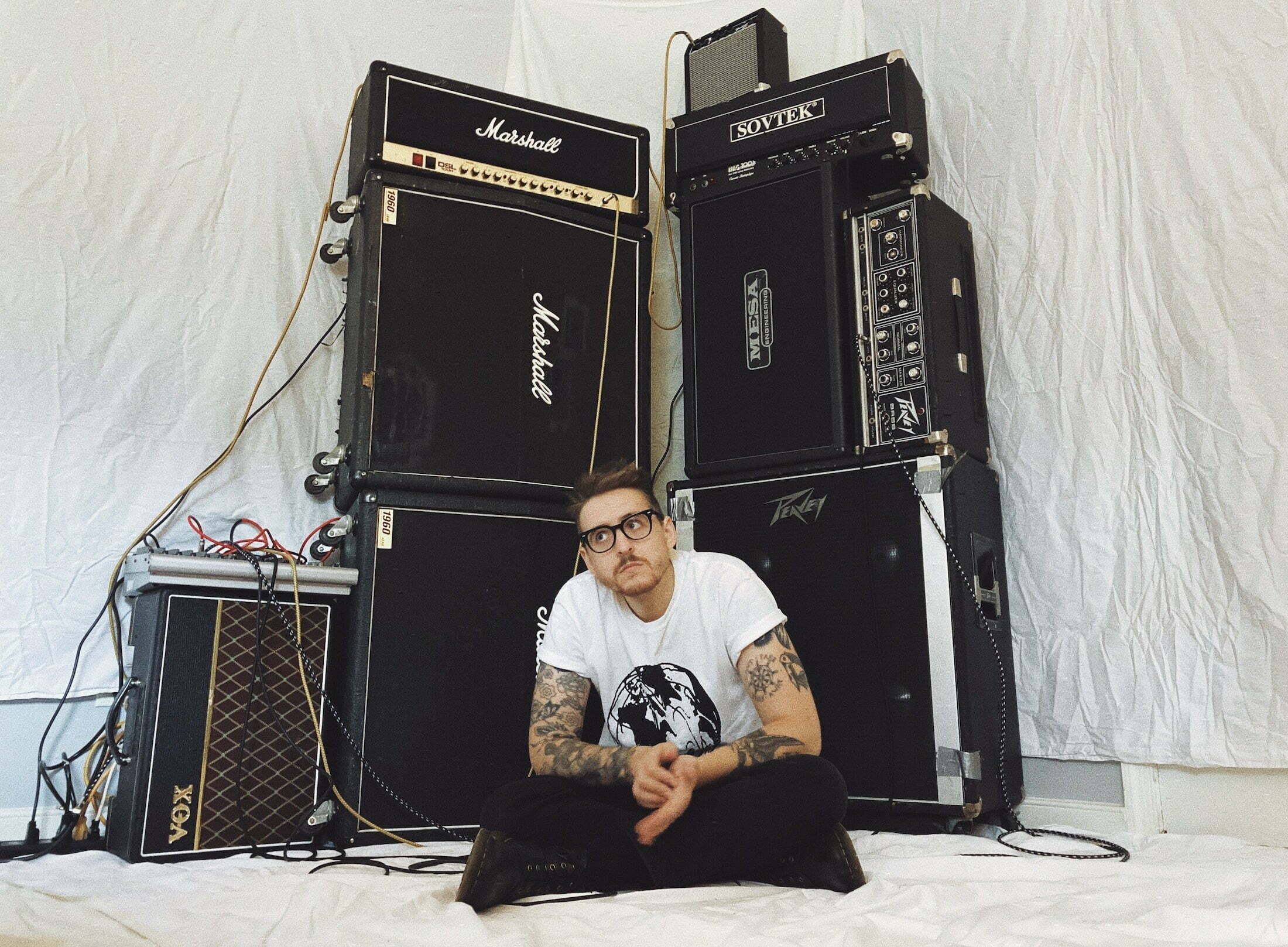 There’s nothing like that first drop on a rollercoaster ride. Press play on the debut Dazy LP, “OUTOFBODY,” and you might think you’re strapped in next to James Goodson, letting gravity take the wheel.

“Please keep your arms inside of the ride / You’re gonna need them just to hold on for dear life,” Goodson sings during “Rollercoaster Ride,” one of the singles that preceded the album’s late-October release. The lyrics reflect both the experience of listening to these 12 fast-paced, hook-filled rock songs and the experience of prepping a first full-length for release. “You only get one debut record,” Goodson says, “so make it what you want it to be.”

Goodson is uniquely positioned to make music as he wants it to sound. Dazy’s studio output is a solo endeavor, tracked one self-recorded layer at a time at home in a spare office. It’s a sparse setup: a desk, some small amps, GarageBand. “Everything is built for keeping it simple,” he says.

Though Goodson says he’s “not a super-technical guy,” tracking at home gives him freedom to experiment, translating to plenty of fuzzy guitars and feedback, sounds he’s always gravitated toward. “You’re not feeling rushed at all so you can take your time with doing as many weird guitar things as you want,” he says. “A lot of that feedback stuff will be a happy accident.”

Goodson’s grasp of songcraft, however, is no accident. The sleek compositions on “OUTOFBODY,” starting with the anxious-yet-inviting title track and ending with poignant closer “Gone,” were chosen from a backlog of around 100 songs. He remembers hearing plenty of classic rock in the car while growing up in Lovettsville, just over the border from Maryland in Northern Virginia, but he calls punk his “first big musical love.” His current songwriting, which regularly clocks in below three minutes, remains true to the genre’s trademark brevity.

“I found it to be such an interesting puzzle,” he says, “even back then. And I still feel the exact same way. I still see it as this problem-solving thing, except it’s something that you can never fully get the right answer.

Judging by the attention Goodson’s work is drawing, he’s certainly getting something right. During the pandemic, he had even more time to hone his demos. “It helped me realize, ‘I actually think I really like these drum machines,” he says. “I really like the way these demos sound, and maybe these things that I had been looking at as problems are actually things that I like.”

Goodson began sharing those recordings as final products, and momentum picked up quickly. “Once I started, I couldn’t stop,” he jokes. In the span of a year, the ensuing series of single and EP releases was packaged together by Convulse Records on a compilation entitled “MAXIMUMBLASTSUPERLOUD: The First 24 Songs.” The cassette documents a remarkable opening salvo — the kind of concentrated mixture of catchy choruses and immediately ingratiating riffs that signals big things to come.

Lame-O Records read that signal loud and clear. Ironically, when the Philadelphia-based label proposed working together on the project that would become “OUTOFBODY,” it took Goodson an extra beat to receive that signal, given his friendship with Lame-O’s founder, Eric Osman. “I have a tendency to think, ‘Oh, they’re just being nice,’” Goodson says. “Then a week later he emailed me and pretty much straight up was like ‘I was not just being nice. I want to do that.’”

The result is colorful inside and out. The new album is available on both Coke-bottle-clear vinyl and a Lame-O fan club half-red, half-white pressing. Convulse has a cassette version. There’s a red Rough Trade exclusive variant. A white Urban Outfitters option, too. “I can’t even try to sound chill about it,” he says of the variety of forms his album will take. “I worked at Urban Outfitters as a kid… It’s definitely a total trip.”

Being at the center of that trip is new for Goodson, despite having led others along that voyage for some time. Goodson also works as a music publicist, a job he says he “fell into” after graduating high school in 2007, forgoing college and moving to Richmond in search of a bigger scene. “I’ve been obsessed with music stuff my whole life,” he says, “and it became the main thing that I’ve oriented my life around, since I was a kid even… When I moved it was about choosing a place with music. I’ve made a lot of decisions based on music.”

Another outlet for Goodson’s obsession is “The Best Good Band Podcast,” an album-by-album deep dive that’s covered the catalogs of foundational points of inspiration like the Ramones, the Clash and Rancid. Goodson’s co-host for the light-hearted but heavily informed conversations — also recorded in Goodson’s home studio — is Jake Guralnik, who plays bass in the Dazy live band. Goodson, in turn, plays bass in the Guralnik-led group Bashful. Goodson says he felt like a “fish out of water” when beginning to embed himself in Richmond’s larger-than-Lovettsville music community, and he remembers saying yes to any gig that came his way. Over time, however, he came to appreciate how more bands and venues affords greater selectivity.

“There’s a hardcore scene, and a punk scene, a metal scene, and an indie scene,” he says of Richmond. “They cross over from time to time, and sometimes they don’t, but when you’re growing up in a tiny town, there is none of that. It’s literally like, ‘Oh, you like something that is loud and ever so slightly alternative in some way. We can play a show together.’”

Dazy’s live act has been on its own evolutionary track, one that involves turning layered demos into workable arrangements, and giving drummers license to veer from the precedent set by drum machines. “I always think of Guided By Voices,” Goodson says, “where their recordings would be one thing, and then live it was a totally different kind of thing … I like when it’s a little different or hits in a different way, and that’s something that I’ve really been getting a kick out of with starting to make Dazy an actual live band — getting to see how the songs change.”

Audiences along the East Coast will see that change for themselves early in December, with shows planned in Washington D.C., Philadelphia — part of the “Lame-O Turns Ten” concert series — and New York City. Each is a fresh opportunity to interact directly with listeners who have followed Dazy’s early evolution or had their ears bent more recently by “OUTOFBODY.”

“I think anybody who’s ever made something where you have to put some of yourself into it … when you put it out into the world and get clued in that even one stranger has absorbed it, it kind of blows your mind.”

But don’t expect him to abandon his singular, dance-like-nobody-is-watching approach to making music he loves.

“To me, that’s what you’re always chasing.”

To purchase “OUTOFBODY” and for more information about Dazy’s upcoming performances, visit linktr.ee/dazysound. “The Best Good Band Podcast” can be heard on your preferred streaming service. To support the podcast, visit patreon.com/bestgoodbandpod.