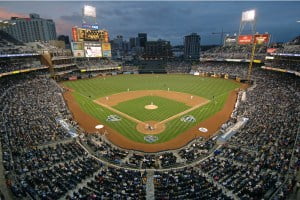 San Diego has the pleasure of hosting three playoff games this weekend and the Metropolitan Transit System is ready, providing extra trolley service on all three lines for fans.

The games: at 5:37 p.m Friday and 6:37 p.m. Saturday at Petco Park, the San Diego Padres host the Los Angeles Dodgers in the National League Division Series, then, at 7 p.m. Sunday, at Snapdragon Stadium, the San Diego Wave Fútbol Club plays its first playoff match against the Chicago Red Stars.

The ballpark and Snapdragon are expected to be sold out, so downtown and Mission Valley traffic will be heavy and parking fees steep. MTS has extra service and special offers available to help.

For the Padres at Petco:

In addition, MTS will offer a discounted two-day Padres Pass Friday and Saturday, with all-day transit service for $8, a $12 value. The pass is available through the PRONTO app and online at RidePRONTO. It will be available at ticket machines starting Friday.

For the Wave at Snapdragon:

Kids also ride free. The MTS Youth Opportunity Pass is available, as is the Family Weekend offer, in which two kids 12 and under ride free with an adult.