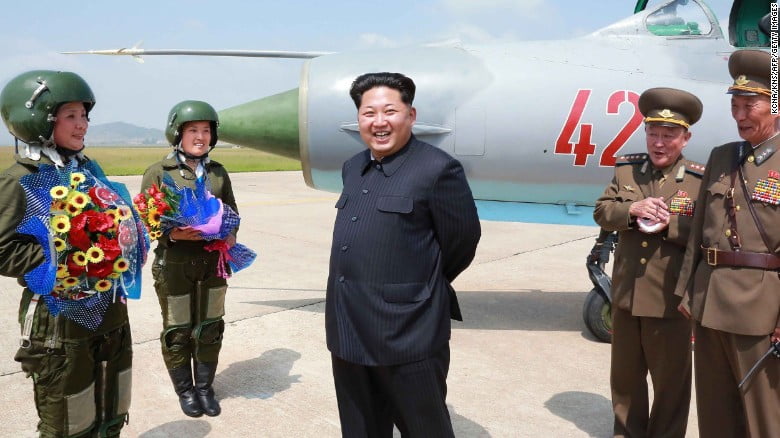 North Korean leader Kim Jong Un meets with North Korea’s first female fighter jet pilots in this undated photo released by the country’s state media on Monday, June 22. He called the women “heroes of Korea” and “flowers of the sky.”

Seoul, South Korea (CNN)North Korea has publicly executed the country’s defense minister after the regime accused him of treason, according to reports from South Korea on Tuesday.

Hyon Yong Chol was killed by fire from an anti-aircraft gun at a military school in front of hundreds of people in Pyongyang, the South Korean Intelligence Service (NIS) was reported to have told parliament members in a closed door session.

Hyon was executed because he expressed discontent towards leader Kim Jong Un, and failed to follow Kim’s orders on several occasions, according to Kim Gwang-lim, chairman of the National Assembly Intelligence Committee and a lawmaker with the Saenuri Party who attended the briefing.

However, on Friday, an official with South Korea’s NIS told CNN that while the agency was sure Hyon had been “purged,” it had not confirmed whether he had been executed.

The reports are impossible to independently verify due to North Korea’s strict control over information coming in and out of the country.

What led to execution?

The timing of Hyon’s alleged execution is unclear. Reports suggest he was killed “around April 30.” The last mention of Hyon in North Korean state media was on Wednesday, April 29, when he was reported to have attended a performance of the Moranbong Band at the People’s Palace of Culture, earlier that week.

Lawmaker Kim Gwang-lim said the South Korean spy agency said that Hyon was executed without trial within two to three days of being arrested. If the dates are correct, they suggest Hyon’s fall from grace was swift and decisive.

Kim himself had been scheduled to go to mark Victory Day commemorations on May 9. However, in late April, Russian officials announced that he had pulled out to attend to “domestic issues” at home.

No single incident was said to have led to Hyon’s arrest and execution, although Kim Gwang-lim said, along with general neglect of duty, Hyon was seen nodding off during a meeting organized by Kim Jong Un.

A spokesman for South Korea’s Unification Ministry said the government considered the execution to be another display of “fear politics” in North Korea.

“Our government views that the purge is promoting the solidification of the only monolithic leadership of Kim Jong Un by creating atmosphere of fear,” said Lim Byeong-cheol.

His career continued after power transferred to the younger Kim upon the death of his father in 2011.

“This is a big deal. He was a survivor,” said Charles Armstrong, Professor of Korean studies at Columbia University.

“He was from Kim Jong Un’s father’s regime. He made it through the transition. He was a very high profile military man.”

According to a biography published on the blog North Korea Leadership Watch, Hyon’s political career started in 2009 when he was elected to the 12th Supreme People’s Assembly.

As a four-star General, he was elected to the Workers’ Party Central Committee in September 2010. The Central Committee is a group of around 300 high-ranking officials, which elect members of North Korea’s top leadership team, who run the country under Kim.

From July 2012 to May 2013, Hyon served as the Chief of the Korean People’s Army General Staff before being promoted to Colonel General, North Korean Leadership Watch said.

“He was someone that one would have thought would remain very high up in the regime. So this kind of a shake up, particularly if he’s been executed, is quite a remarkable turn of events,” Armstrong said.

North Korean leader Kim Jong Un has been accused of ordering the executions of as many as 15 top officials so far this year. However, during a rare trip by CNN to Pyongyang last week, a top official dismissed the allegation as “malicious slander.”

“Especially because they tried to link the alleged statement to the august name of our Supreme Leader Marshall Kim Jong Un,” said Park Yong Chol, the deputy director of the DPRK Institute for Research into National Reunification.

However, he did not deny that executions take place for crimes of treason or subversion: “It is very normal for any country to go after hostile elements and punish them and execute them.”

In December 2013, North Korean news agency KCNA confirmed that Kim’s uncle Jang Song Thaek had been executed for trying to overthrow the state. The report described Jang as “despicable human scum” and “worse than a dog.”

One of the most senior defectors to escape North Korea in recent years has told CNN that the spate of top-level executions has created a climate of fear among regime insiders.

“During his first three years in power, hundreds of the elite have been executed,” said Park, who CNN has agreed not to identify to protect his friends and relatives still in Pyongyang. Much of what Park tells us cannot be independently verified, as North Korea is one of the most closed and repressive countries on Earth.

Park said Kim’s brutality had undermined his power base, and predicted Kim would be replaced as leader within three years.

The prospect of potential instability in North Korea worries experts who are concerned about the country’s nuclear weapons.

“There are quite a number — at least a dozen — nuclear weapons,” said Armstrong of Columbia University. “We want to make sure we know who’s in control of them.”

Armstrong said Kim differed from his father and grandfather, who in past purges merely pushed people aside.

“Kim Jong Un has shown a ruthless side that we haven’t seen since his grandfather consolidated power back in the 50s and 60s — going after rivals and potential rivals and having them executed.”

He said the structure of the North Korean political system made it difficult to mount any kind of challenge to Kim’s leadership — but “anything is possible.”

“Particularly when we see these high-ranking people (like Hyon) bumped off like this. There might be a group who feel that they’re better off under a different leadership,” Armstrong said.