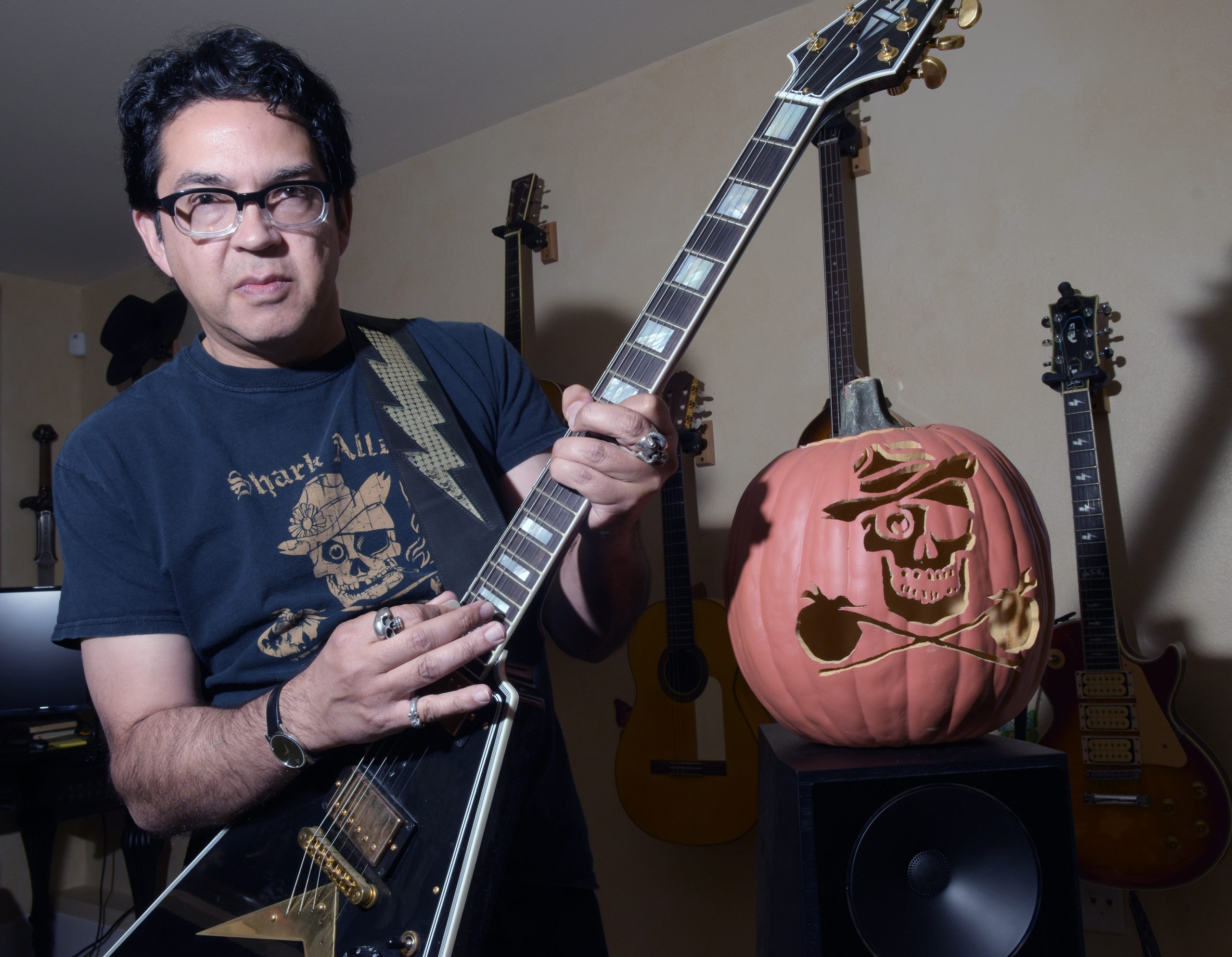 Che Prasad knows how to have a gourd time.

Every October when the pumpkin patches pop up and Halloween decorations emerge in Marin neighborhoods, the San Anselmo resident gets to work carving music-themed pumpkins. For the past few years, Prasad, a musician and pathologist at MarinHealth Medical Center, pays homage to his favorite musicians through his work, listening to their music throughout the process. Some of his previous carvings include Prince, David Bowie, Alice Cooper, Jimi Hendrix, ZZ Top and Ace Frehley from KISS.

Q How did this begin?

A I have always loved Halloween and I have always loved music. My daughter Indigo never seemed satisfied with the traditional jack-o-lantern, and she would cry. To try to impress her, I started getting some simple stencil patterns and she still wasn’t happy with that. Then, I found websites like StoneyKins that had these great cut-out patterns. Since I liked music, I did a couple of musicians. I would let her do the stenciling. She’s now 15. It just progressed over the years.

Q Do the skills from your job help you?

A Yes. Sometimes friends say, “What did you do to get good at this?” And I am like, “Four years of medical school, five years of residency and 20 years in private practice in pathology.” Anybody can do these as long as they have patience and some practice using the blades. I use standard things in a pumpkin carving kit and anything you might find in a pathologist’s office.

Q Is it a relaxing process?

A From picking out the pattern, the right pumpkin and prepping the pumpkin, it becomes like a ritual. It is almost like a meditation. This is something where I am using my skills to do something that is artistic. Another part of the process is to capture its essence in pictures, so I do different pictures in different lighting, post those online and people will comment on them and ask what I’m doing next, which is nice.

Q What were your pumpkins this year?

A Jerry Garcia, Stevie Ray Vaughan and the Beatles’ “White Album.” Jerry Garcia’s connection to Marin County inspired me. My brother died seven years ago from a brain tumor and his favorite musician was Stevie Ray Vaughan. Carving that pumpkin this year — he passed in October — was especially meaningful.

Q What’s the role music has had in your life?

A I started playing guitar because of KISS. I played in bands in high school and college. I am a little shy and it was a nice way for me to meet people. When I got my private practice job, I had time to do some things outside of medicine and formed a sea shanty band, the Shark Alley Hobos. We do rock ‘n’ roll sea shanties. This month, we did a Who tribute at the Sweetwater, and I did a foam pumpkin of the Who’s logo. And at the show, instead of smashing my guitar, I smashed our pumpkin. My dad took me to my first KISS concert and I was able to see them with Indigo right before the pandemic. She met Ace Frehley and had him sign a picture of her next to the KISS pumpkin. That was like a full circle for me.