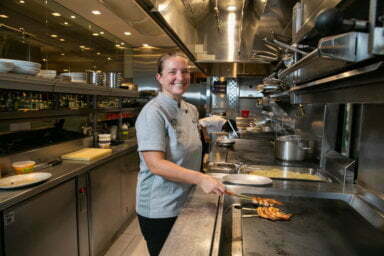 A New York City chef is taking an Empire State Building restaurant by storm with plant-based dishes that are healthy and delicious.

Chef Morgan Jarrett was born and raised in Fort Worth, Texas, and learned to cook at a young age. As a young adult, she picked up a job at a wine bar in her area and learned that she wanted to go to school in New York and make a name for herself.

“I found my way up here after college and went to school, it was just really what I was meant to do,” said Jarrett. “I ended up at a great small restaurant in Brooklyn called Seersucker. I worked for them for several years and then I had an opportunity with Yellow Magnolia restaurant at Brooklyn Botanic Garden.”

Jarrett worked in a number of kitchens over the years and really started to refine her farm-to-table approach while working at the Brooklyn Botanic Garden. She adopted a zero-waste style of cooking that she has brought with her ever since.

Jarrett started at STATE Grill and Bar, located within the Empire State Building, in 2019, and has taken her farm-to-table approach to the menu. Though everything was put on hold for a period of time due to the pandemic, once STATE was back and ready for action, Jarrett got to work on the menu.

Thanks to her experience at Brooklyn Botanic Garden, Jarrett developed a new recipe called Beetroot Bucatini, which infused beet juice into the pasta during the cooking process.

“Everyone loves bucatini and it’s kind of a classic pasta, It’s kind of a classic pasta dish, but I wanted to apply my own sensibility to it. Me and my team, we came up with a way of making the pasta by juicing fresh beets and it gives the pasta this beautiful color. But then after we’re done juicing the beets, we take the pulp that’s left inside the juicer and we dehydrate it, so it’s like breadcrumbs,” said Jarrett.

For the sauce, fresh fennel is sautéed and deglazed with white wine. In the same pan, Jarrett adds cold butter, the cooked pasta, pecorino, black pepper, and a bit of the remaining pasta water, much like a traditional cacio e pepe, and before serving she garnishes the plate with fennel fronds, fresh tarragon, more pecorino, and “beet crumbs,” which are made from the remaining beet pump and dehydrated.

“We use fennel and anise liqueur, which I feel those flavors brighten up a beet, which can taste very earthy,” said Jarrett.

In Jarrett’s cooking, she says that vegetables are the most interesting part of her dishes and makes it so they can stand alone on their own or with meat added to the plate.

“There’s a lot more possibility of what you can do with [vegetables] and manipulate them, as opposed to a piece of meat, there’s only a few things you can do,” said Jarrett. “Also the way people are eating is changing, a lot more people are adopting a flexitarian diet or they only eat meat once a day and when they do, it’s a 4 or 5-ounce portion and not a 10 or 12-ounce portion.”

As for STATE, Jarrett is excited to keep having fun with the menu, with delicious meat and veggie options, as the New Year unfolds.

“I’m already excited thinking about kind of resetting and January. Also, because people do gravitate a little bit more toward healthy food and plant-based cooking, so I know I have a little bit of room to play there. I already start planning my spring menu in January and have some new plant-based pasta dishes that I’m playing around with,” said Jarrett. “The building itself is always evolving, right? You always have like kind of a new wave of workers that come in here, especially since the pandemic, you have a whole new workforce that’s working here. So you get to know you know what it is that they’re looking for and we’re fortunate enough to be in the middle of Manhattan where people are willing to try new things and you don’t have to stay stuck you know with a certain menu.”

For more information about STATE Grill and Bar, visit patinagroup.com/state-grill-and-bar.