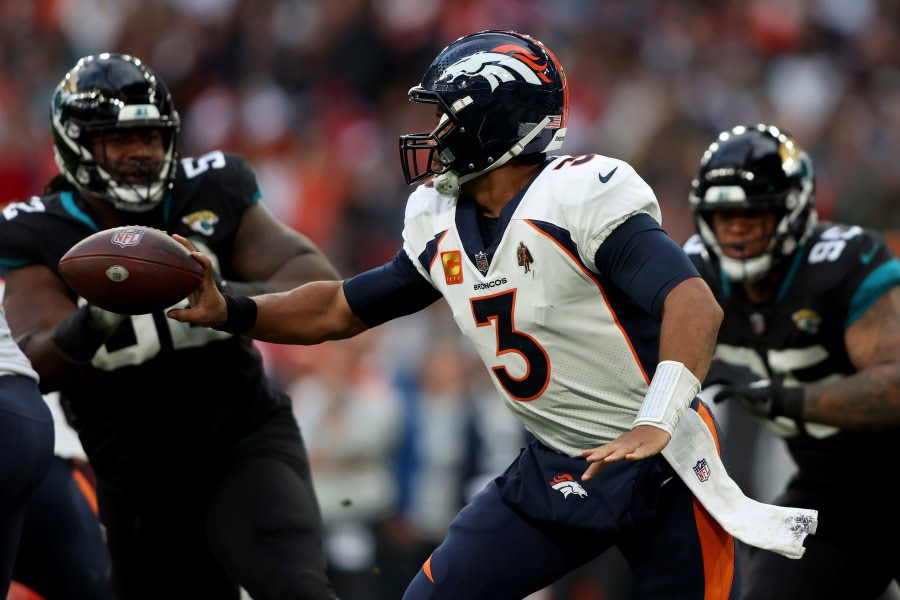 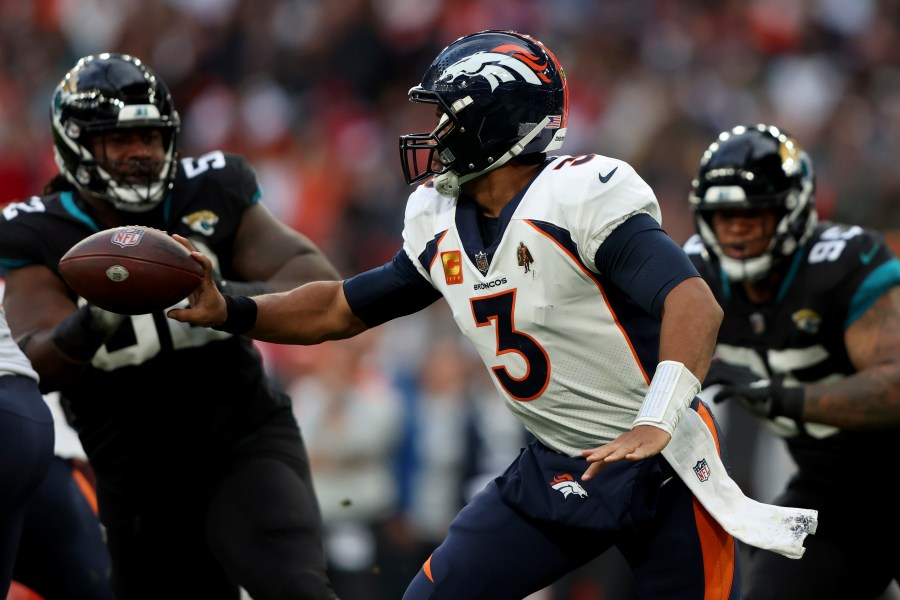 The 2022 offseason was not a fruitful one for NFL contenders looking for new starting quarterbacks.

Many options looked intriguing: Russell Wilson unwanted in Seattle, Matt Ryan’s career winding down in Atlanta and Carson Wentz coming off a sour ending in Indianapolis. The Denver Broncos traded for Wilson, the Colts dealt Wentz to Washington and acquired Ryan.

All three teams had big expectations. All three moves backfired.

From the Broncos’ struggles with Wilson to the Colts benching Ryan to Wentz’s inconsistency and yet another injury, most of the changes didn’t pan out. Two coaches — Carolina’s Matt Rhule and Indy’s Frank Reich — even lost their jobs.

The so-called sellers have had the most success. The 6-3 Seahawks lead their division after trading Wilson and going with Geno Smith, while the Falcons remain in the playoff hunt at 4-5 after moving on from Ryan and signing Marcus Mariota.

Here’s a look at how things have played out.

Price paid: Three players, five draft picks and a $245 million extension with $165 million guaranteed, including a $50 million bonus at signing.

How it started: General manager George Paton wanted to solve the team’s long-running quarterback quandary and believed the answer was Wilson, a nine-time Pro Bowler during a decade in Seattle. He was Denver’s sixth opening-day starter in six seasons.

How it’s going: Wilson hasn’t resembled the star he was in Seattle and rookie head coach Nathaniel Hackett hasn’t helped with using so many shotgun formations. When Wilson’s under center, he’s a textbook example of mechanics and footwork. In the shotgun, he’s all over the place and not seeing his open receivers often enough.

Where it’s headed: Wilson is sticking around because of the big contract. Hackett’s on the hot seat, though Paton gave him a vote of confidence in London before Denver’s Oct. 27 win over the Jaguars snapped a four-game skid.

How it started: Indy soured on Wentz when he refused the COVID-19 vaccine and his poor play in the final two games, after testing positive for the virus, cost the Colts a playoff spot. GM Chris Ballard sent Wentz to Washington, then waited until Atlanta started searching for Ryan’s successor. Indy thought it pulled a coup by acquiring a proven leader who was still playing well.

How it’s going: What looked like a good match has been anything but. Behind a rebuilt and underachieving offensive line, Ryan struggled. He threw nine interceptions, had 11 fumbles and 12 total turnovers — all league highs. He also was sacked 24 times and took 59 hits before being benched in favor of Sam Ehlinger. The result: offensive coordinator Marcus Brady was fired last week and Reich joined him on the unemployment line Monday.

Where it’s headed: Ryan’s future in Indy looks bleak. He has one season still on his contract, and it would cost Indy $18 million in dead money to cut him. Could he be traded? Maybe. But how much interest is there in a 37-year-old quarterback after his worst pro season?

How it started: Wentz went into training camp as the unquestioned starter ahead of Heinicke and rookie Sam Howell. Wentz and coach Ron Rivera brushed off some practice inaccuracies. Then Wentz rebounded from throwing back-to-back interceptions in the season opener to lead the Commanders to a comeback victory against Jacksonville.

How it’s going: Wentz threw 10 TD passes, six interceptions and played through a broken finger at Chicago to snap the Commanders’ losing streak. He hasn’t played since having surgery while Heinicke has led Washington to a 2-1 mark with Wentz on injured reserve. The team hasn’t said when Wentz may return, and Rivera doesn’t intend to make a decision until Wentz is back.

Where it’s headed: Wentz’s contract is structured to give the Commanders an out after this season with no salary cap penalty, but a lot will depend on the rest of this season and whether Rivera remains the coach. Howell slipped to the fifth round but could be the next in a long line of Washington quarterbacks of the future.

How it started: After trying and failing to acquire Deshaun Watson, the Panthers pursued Mayfield but didn’t get him from Cleveland until July. That cost him practice snaps and time to learn the playbook, but Mayfield still beat Darnold for the No. 1 job before the season opener.

How it’s going: Mayfield has been unproductive, going 1-4 as a starter and posting the league’s worst QB rating. P.J. Walker took over when Mayfield injured his left ankle in Week 5. Even after Walker’s dreadful game at Cincinnati, interim coach Steve Wilks stuck with him.

Where it’s headed: Mayfield could be demoted to No. 3, maybe even released, with Darnold activated from injured reserve. It’s extremely unlikely the Panthers re-sign Mayfield when he becomes an unrestricted free agent in March — if he makes it that long.

How it started: The Browns didn’t offer Mayfield a long-term deal after he played through a shoulder injury in 2021. His status with the team took a hit and a poor ’21 lowered his market value. When Watson became available, the Browns entered the bidding late and were initially rebuffed by the three-time Pro Bowler. But owners Dee and Jimmy Haslam changed Watson’s mind with a fully guaranteed, five-year, $240 million deal despite his legal issues. Mayfield eventually was dealt to Carolina for a fifth-rounder — after the Browns agreed to eat most of his 2022 salary.

How it’s going: Knowing Watson might be suspended by the NFL, the Browns signed Brissett, a former starter with Indianapolis, as a free agent. Brissett has been better than expected and has provided invaluable leadership. The lone knock: He’s had a few costly turnovers.

Where it’s headed: Watson is expected to return when the league’s 11-game ban for violating the personal conduct policy ends. He was accused of sexual misconduct by more than two dozen women while he played in Houston. He’s eligible to resume practicing next week and if reinstated, could make his Browns debut Dec. 4 — against the Texans. He hasn’t played in a regular-season game since Jan. 3, 2021.

How it started: The Seahawks re-signed Smith to compete with Drew Lock following the trade with Denver. Wilson’s longtime backup had the advantage throughout the offseason and training camp and when Lock missed a preseason start after testing positive for the coronavirus, it was clear Smith would be the starter.

How it’s going: Smith is one of the top contenders for comeback player of the year. It’s the first time since 2014 he’s been a full-time starter and he leads the NFL in completion percentage, is third in passer rating and tied for fifth in TD passes. He’s been the biggest surprise for Seattle.

Where it’s headed: This was viewed as a bridge season as the Seahawks tried to draft a new franchise quarterback in April. That may still happen, but Smith might be the best short-term solution. NFC West-leading Seattle is 6-3 faces a decision about re-signing him or letting him test the free agency.

How it started: Following Roethlisberger’s retirement, Trubisky was tabbed the starter at the end of training camp. He spent 3½ games largely avoiding mistakes but struggled to throw downfield and was benched at halftime of a loss to the Jets in Week 4.

How it’s going: Pickett has shown plenty of fight, but the Steelers’ only victory since he supplanted Trubisky came against Tampa Bay on Oct. 16 when Trubisky relieved Pickett (concussion) and threw for 144 yards and the clinching TD pass. Pickett has retained the starting job and he has looked fine between the 20s but has struggled to generate points and has thrown eight interceptions.

Where it’s headed: Pittsburgh is all in on Pickett but also declined to explore trade options for Trubisky, who has said and done all the right things since being demoted. Trubisky’s presence gives the Steelers a reliable backup, but the starting job is Pickett’s for the foreseeable future.

How it started: With third-round pick Desmond Ridder serving as Mariota’s backup, the thought was Mariota would have a short leash. Instead, he has taken every snap and has the Falcons tied for first in the NFC South.

How it’s going: Mariota has been a good fit in coach Arthur Smith’s offense. He’s not going to lead the league in passing, but he has 10 TD passes with six interceptions and has added a dual-threat presence Ryan could not. Mariota has 340 yards rushing and three TD runs.

Where it’s headed: Mariota clearly has Smith’s confidence and support. Smith brushed off a question about playing Ridder with a sarcastic reply about having the rookie hand the ball off just to make critics happy. Still, there is an expectation Ridder will play at some point, but it will be as a backup as Mariota appears firmly entrenched as the starter.