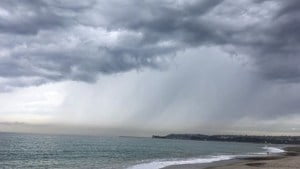 Rain soaked many parts of San Diego County Wednesday while also driving down temperatures that could bring snow to mountain areas before the storm system moves out of the area, according to the National Weather Service.

The colder temperatures and possibility of snow prompted the NWS to issue a winter weather advisory for the San Diego County mountains that will be in effect from 10 p.m. Wednesday through 8 a.m. Thursday.

Snow levels look to fall as low as 4,000 feet overnight into Thursday. Forecasters said mountain areas could get up to 2 inches of snow, accompanied by winds of 20 to 30 mph, gusting up to 50 mph.

Another round of more widespread showers and isolated thunderstorms will develop Wednesday night, the NWS said.

Thursday’s highs were forecast to be around 60 near the coast, around 60 in the valleys, lower 50s near the foothills, mid 40s in the mountains and mid 60s in the deserts, according to the weather agency.

Forecasters expect dry and warmer weather Friday through this weekend, though highs look to remain slightly below normal.

Another low pressure system early next week will bring chances for precipitation, cooler temperatures and gusty winds, the NWS said.