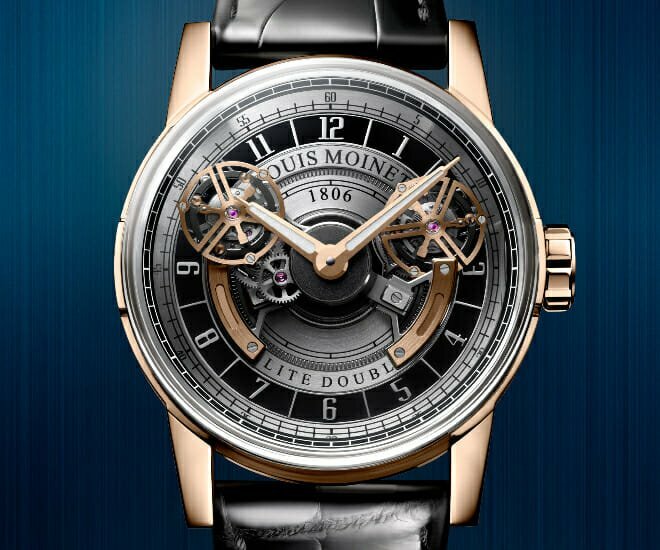 As a watch collector, you may know the name Louis Moinet. He is the watchmaker who invented the chronograph, and the brand that bears his name is an exhibitor at Watches and Wonders Geneva. On the other hand, Moinet is no Abraham-Louis Breguet nor Adrienne Philippe, and no grand workshop called Louis Moinet ever graced Paris or Geneva. A little more than 10 years ago, the talents of this French watchmaker, artist and academic might have been unknown to you. Indeed, with reference to that time period, some of you might instead recall a great deal of fuss being made at the Salon International de la Haute Horlogerie in Geneva over another French watchmaker, the relatively famous Nicolas Mathieu Rieussec…

Rieussec was already in the books as the inventor of the chronograph in 1822, and his life was better known than Moinet’s, given that he was in the registry of active watchmakers in Paris as early as 1810. In 2012, no one even knew Moinet’s birthplace, but a change was coming that would forever upend the other prevailing order in watchmaking. “We said, from the Jura where we were, hello, excuse us, but there is a page missing from the history of watchmaking,” said Les Ateliers Louis Moinet SA CEO and Creative Director Jean-Marie Schaller.

Schaller is referring here to a series of events that confirmed the basic facts of Moinet’s original invention of the chronograph. If you have not heard the story, it is well worth a listen. Even though we know the tale quite well, it was amazing to hear it again from Schaller when he was in Singapore recently to celebrate his brand’s exclusive retail arrangement with Sincere, at the SHH boutique at MBS. In any case, we recall being very shocked that Moinet had created a true stopwatch in 1816 that could track elapsed time down to 1/60th of a second. For some context, Rieussec’s chronograph was accurate to one second, and that was plenty good enough in the early 19th century.

This begs a few questions: what even is Les Ateliers Louis Moinet? Does it have anything to do with the watchmaker Louis Moinet? And who is Jean-Marie Schaller? To begin with, the contemporary firm was founded in 2004 by Schaller, a Swiss man from Delemont in the Jura who is completely unrelated to Moinet. A few other names come into focus before the connection between Moinet and Schaller becomes established. Somehow, it is all tied into Schaller’s love of travel. Now there may be some head scratching here but for those in the know about Swiss watchmaking, there is nothing particularly mysterious here.

It all begins with another grand watchmaker, Breguet, which itself went through many tumultuous episodes. While we mean the watchmaking firm Breguet, there is a place here for Abraham-Louis himself. Okay, we can feel you staring daggers at us but we promise that it all makes sense.

To make a long story shorter, when the Chaumet brothers acquired Breguet, they also got their hands on the archives and all manner of historical documents. This is Breguet, a name that evokes watchmaking history, after all. The brothers brought in a watchmaker of no small renown to help them make sense of it all, Daniel Roth. Yes, that Daniel Roth, the watchmaker whose brand was developed in Asia by the Siber Hegner SA trading company. Schaller got his start in the watchmaking trade at Siber Hegner, and was responsible for making growing the Daniel Roth watchmaking brand.

“I began with the Louis Moinet project in 2000. It began as a laboratory, working from home with my wife, next to the kitchen, which definitely seems to be a habit in this industry,” Schaller told Monochrome last year.

“Somehow, I did not look for Louis Moinet. Louis Moinet looked for me. That’s a strange feeling, but it was my destiny. The name was completely forgotten, but people kept talking to me about it, in particular, Daniel Roth.”

“Jean-Marie, you must be interested in this name (Louis Moinet), it is meant for you,” Roth told Schaller.

If all this sounds like magical thinking, bear in mind that the historical achievements of Louis Moinet are all too real. The watchmaker himself penned a book called “Traité d’Horlogerie” (Treatise on Watchmaking), which Elizabeth Doer of QP notes was familiar to prominent scholars such as Dr Ludwig Oeschlin, Arnaud Tellier and Dominique Flechon. This work describes a watch known as the Compteur de Tierces, which was the culmination of Moinet’s ambitions. In fact, Moinet worked on this watch while living with Abraham-Louis Breguet, a fact Roth tumbled to when he worked on the archives. Moinet and Abraham-Louis worked at the same address from 1815 to 1823.

The Compteur de Tierces was started in 1815 and completed a year later, and thus a link between the masters is given physical form. This is how Moinet described it in a letter: “I came to Paris in 1815 with the sole purpose of devising and making a compteur de tierces. The difficult and seldom attempted realisation of this instrument of a new construction, has achieved my purpose most satisfactorily.”

This watch really exists, and was sold at a Christie’s auction in 2012; the hallmarks inside the watch bear out its production history. Curiously, Doer notes that Tellier wrote the lot notes for the watch, which had an underwhelming estimate of CHF5,000. Schaller won it in a fierce bidding war, taking the price to an order of magnitude above the estimate. The Compteur de Tierces was the watch that showed that Louis Moinet was indeed the inventor of the chronograph, as verified by the aforementioned experts but also others who worked in the auction business. This was the big horological news of 2013, and the Compteur de Tierces would figure prominently in the future of Louis Moinet too.

This brings us back to the status of the contemporary brand Louis Moinet, which Schaller has built up from scratch and today produces some 500 exceptional watches annually. Now, 500 watches do not sound very much until you consider the word exceptional; Schaller began his journey wanting to rescue a watchmaker from obscurity, and having succeeded, he does not intend on spoiling things by offering timid and tepid timepieces.

Looking at the contemporary watches here, you will not fail to be impressed. You can examine any Louis Moinet watch at the SHH boutique to find four symbols the brand uses to express its values: uniqueness, creativity, artistic spirit and exclusivity. Louis Moinet today focuses on two pillars: Cosmic Art and Mechanical Wonders. Interestingly, Cosmic Art may seem a far cry from Monet’s own work, but he invented the Compteur de Tierces to time astronomical events or heavenly phenomena, not really anything on earth. The connection with Mechanical Wonders is obvious, but we must pause to note that the Compteur de Tierces was a high-beat watch, with its escapement beating at an incredible 216,000 vph, or 30 Hz. Such dizzying speeds were indeed possible back in the day, for exceptional watchmakers such as Moinet. That is the spirit behind everything at the brand Louis Moinet.

This is not to say that Schaller revels in Louis Moinet’s internal abilities, nor does he elevate himself by association. The brand Louis Moinet lists its suppliers openly, in a manner both refreshing for the Swiss and perhaps surprising. If you ask Schaller why he decided on this, when so many brands (large and small) make a big show of mastering everything in-house, he goes quiet for a moment before saying simply “because it is not true (that brands can do everything in-house).” For Schaller, what is important is to find the right partners to execute his vision because Louis Moinet is a series of workshops, literally (Les Ateliers), and the Swiss tradition of working with specialised suppliers is an important part of watchmaking. He notes that his partners, including movement maker Concepto and casemaker FIMM, are constrained by NDAs from revealing who they work for, but Louis Moinet does not require this. Perhaps the fact that Moinet himself had spent so long obscured by history informs Schaller’s thought process here.

While we do not have the space to get into all the key references for the contemporary brand, you would do well to head down to the SHH boutique in Marina Bay Sands Singapore (Louis Moinet has an exclusive relationship with Sincere Fine Watches in Singapore) and look for the hallmarks mentioned earlier. Imagine yourself in Schaller’s place, looking at the hallmarks within the Compteur de Tierces for clues about its story. This remains key to understanding the emotional power behind Louis Moinet.

The post Louis Moinet: The Masters of Time and Space appeared first on LUXUO.