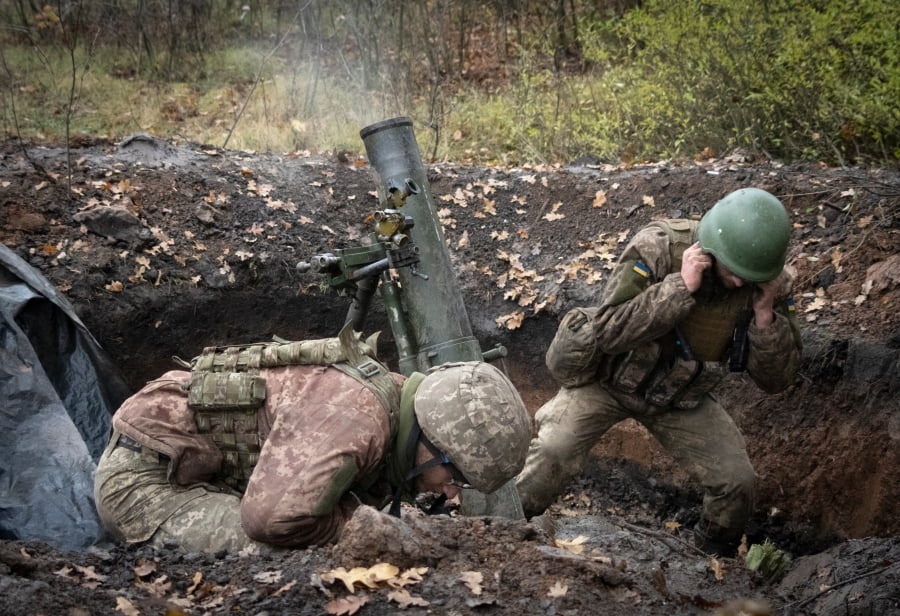 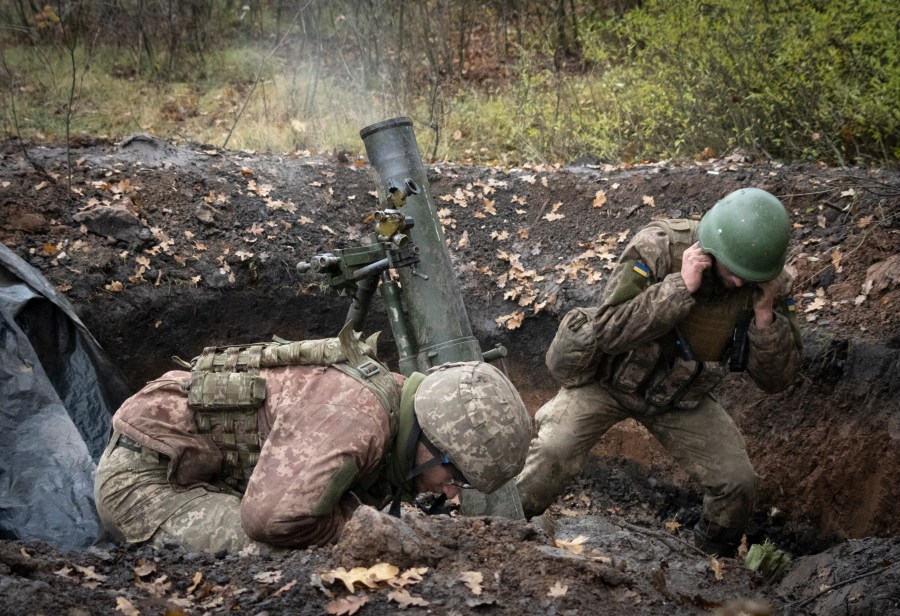 KYIV, Ukraine — Ukraine’s presidential office says at least four civilians have been killed and 10 others wounded by the latest Russian attacks.

A statement Friday says Russian troops again fired on several towns facing the Russia-occupied Zaporizhzhia nuclear power plant across the Dnieper River. In Nikopol, the shelling damaged dozens of residential buildings and power lines, and in the neighboring towns of Marhanets and Chervonohryhorivka, the Russian attacks cut power supplies to thousands of people.

In the eastern region of Donetsk, Gov. Pavlo Kyrylenko said Russian troops pressed their attacks on Avdiivka and Bakhmut, and the entire region “was turned by the Russians into a zone of active hostilities.”

“Civilians who remain in the region live in constant fear, without heating and electricity,” Kyrylenko said in televised remarks. “Their enemy is not only Russian cannons but also the cold.”

In the neighboring Luhansk region, the Ukrainian army is pressing its counteroffensive, fighting for control of Bilohorivka and Svatove, Gov. Serhiy Haidai said.

“The Russians practically destroyed some villages after they started to retreat,” Haidai said. “There are a lot of freshly mobilized Russians in the Luhansk region, but they are dying in droves – they only last for two weeks on average.”

— Russia’s hope for Ukraine win revealed in battle for Bakhmut

– Follow all AP stories on the war in Ukraine at https://apnews.com/hub/russia-ukraine

The press service of Ukrenergo, the sole operator of Ukraine’s high-voltage transmission lines, said in a statement that “emergency outages” of four hours a day or more had resumed in the Kyiv region.

“Due to significant damage and imbalance in the power system, longer power outages are possible,” Ukrenergo said.

The local governor, Oleksiy Kuleba, said Friday on Telegram that the Kyiv region is set to see “tougher and longer” power outages than earlier in the war.

Oleg Syniehubov, the governor of the Kharkiv region, announced on Telegram that daily one-hour power outages will begin Monday across the province, including Ukraine’s second-largest city of Kharkiv.

He said the measures “are necessary to stabilize the power grid, because the enemy continues shelling (Ukraine’s) energy infrastructure.”

BAKHMUT, Ukraine — Russian soldiers pummeling a city in eastern Ukraine with artillery are slowly edging closer in their attempt to seize Bakhmut, which has remained in Ukrainian hands during the eight-month war despite Moscow’s goal of capturing the entire Donbas region bordering Russia.

While much of the fighting in the last month has unfolded in southern Ukraine’s Kherson region, the battle heating up around Bakhmut demonstrates Russian President Vladimir Putin’s desire for visible gains following weeks of clear setbacks in Ukraine.

Taking Bakhmut would rupture Ukraine’s supply lines and open a route for Russian forces to press on toward Kramatorsk and Sloviansk, key Ukrainian strongholds in the eastern region of Donetsk. Pro-Moscow separatists have controlled part of Donetsk and neighboring Luhansk province since 2014.

Before invading Ukraine, Putin recognized the independence of the Russian-backed separatists’ self-proclaimed republics. Last month, he illegally annexed the Donetsk, Luhansk and two other provinces that Russian forces occupied or mostly occupied.

Russia has battered Bakhmut with rockets for more than five months.

KYIV, Ukraine — McDonalds’ Ukrainian subsidiary on Friday said it had reopened four restaurants in the Kyiv region and a fifth one in the northwestern city of Zhytomyr.

The company began a phased reopening of its Ukrainian restaurants late last month, a symbol of the war-torn country’s return to a degree of normalcy and a show of support after the American fast-food chain pulled out of Russia in May.

The burger giant closed its Ukrainian restaurants after the Kremlin’s full-scale invasion in February but has continued to pay more than 10,000 McDonald’s employees in the country.

COPENHAGEN, Denmark — A Swedish prosecutor wants “a supplementary crime scene investigation” at the site of explosions that damaged two natural gas pipelines in the Baltic Sea and said Friday that a preliminary probe concluded the cause was “suspected gross sabotage.”

Prosecutor Mats Ljungqvist said he understood the intense interest in determining what happened to the Nord Stream I and 2 pipelines, which were built to carry Russian gas to Germany.

“But it is important both for the preliminary investigation and for the various collaborations we have that we now get to work in peace and quiet,” Ljungqvist said.

Sweden’s domestic security agency and armed forces are assisting in the investigation, which is being done in cooperation with authorities in other countries,” he said.

The Swedish Security Service previously said that undersea “detonations” on Sept. 26 caused extensive damage to the pipelines in international waters off Sweden and Denmark. The pipelines ruptured, sending large amounts of methane gas into the air.

KYIV, Ukraine — Ukrainian forces attacked Russia’s hold on the southern city of Kherson on Thursday while fighting intensified in the country’s east. The battles came amid reports that Moscow-appointed authorities have abandoned the city, joining tens of thousands of residents who fled to other Russia-held areas.

Ukrainian forces were surrounding Kherson from the west and attacking Russia’s foothold on the west bank of the Dnieper River, which divides the region and the country.

As the battles unfolded, Russian President Vladimir Putin said that Moscow has no intention to use nuclear weapons in Ukraine, despite issuing repeated warnings in the past that he was prepared to use all available means to defend Russia, including its nuclear arsenal.

“We see no need for that,” Putin said at a conference of international foreign policy experts outside Moscow. “There is no point in that, neither political nor military.”

Meanwhile, Russia warned that Moscow could target Western commercial satellites used for military purposes in support of Ukraine, and a Foreign Ministry spokeswoman accused the United States of pursuing “thoughtless and mad” escalation.

Spokeswoman Maria Zakharova argued that Washington should take an approach more like it did during the Cuban Missile Crisis in 1962, when the Cold War superpowers stepped back from the brink of nuclear confrontation.