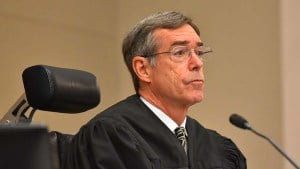 In 50 days, KUSI’s owner will likely face a jury trial in the pay-equity and gender-and-age discrimination case of ex-anchor Sandra Maas.

On Friday, Frazier will give KUSI attorneys a final shot at justifying why Maas has no issues a jury should hear in a trial.

MBC in July sought summary judgment in an effort to derail the 3-year-old case, but Frazier appears set to keep it on track.

Maas “has established a prima facie case” that she wasn’t paid as much as Allen Denton, her male co-anchor, Frazier wrote in a two-page ruling, adding: “The court finds [KUSI] has not met its initial burden of production as to whether the pay inequity was for legitimate business reasons unrelated to gender.”

Gruenberg declared that Maas wouldn’t settle out of court, and told Times of San Diego he thought there’s a 95% chance the trial would start on its assigned date — Dec. 2.

“This is a case that’s older than a lot of other cases on the judge’s docket,” he said in a phone interview. “This case is the poster child for the [California] Equal Pay Act.”

The tentative ruling also suggests Maas, 59, has evidence that she was the victim of retaliation by KUSI, where she worked from 2004 to 2019.

Frazier also denied motions to force Maas to produce 10 emails to former KUSI colleague Anna Laurel and make her give a second deposition.

“At the outset, [KUSI] failed to submit a separate statement in support of this motion, as required by court rules,” the judge wrote. “As a result of this procedural defect, it is not clear … which requests for production are even in dispute.”

Frazier noted that KUSI and Maas disagreed on whether all documents have been turned over, but he has “no way of determining what is or is not in [Maas’] possession on a discovery motion.”

Gruenberg, a veteran at similar suits, said: “What’s unique about this equal-pay case is you have a woman literally performing the same job and responsibilities as the fellow sitting next to her. They’re splitting the news-reading duties.”

He’ll have Maas’ former colleagues to vouch for her.

He cites his deposition of Joe Riddle, a former executive producer of KUSI News.

Gruenberg said he asked Riddle whether he considered Maas an equal of Denton (who made as much as $80,000 more a year).

But after a pause, Riddle replied: “Let me put it to you this way: When we have something really important to impart to our listeners … something that we really wanted to emphasize, we made sure Sandra read it.”

Gruenberg said he muted the Zoom call and gave his co-counsel a high-five.