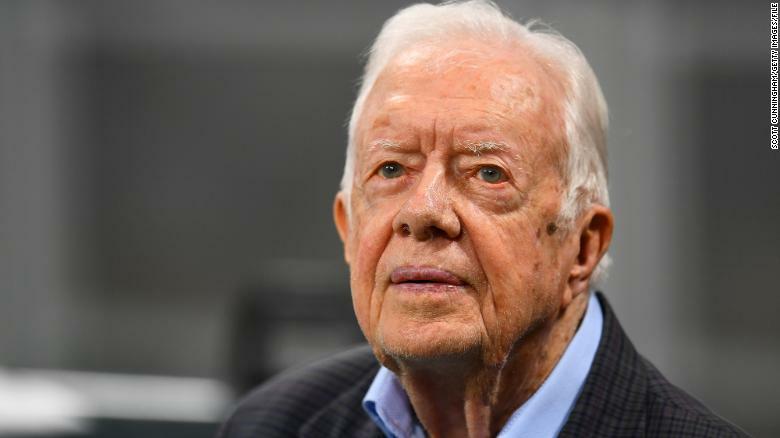 Former President Jimmy Carter said Thursday that Russia’s invasion of Ukraine violates international law and “threatens security” in Europe and around the globe, joining the other living former Presidents in condemning the Kremlin’s attack on its neighbor.

“Russia’s unprovoked attack on Ukraine using military and cyber weapons violates international law and the fundamental human rights of the Ukrainian people,” Carter said in a statement posted on Twitter. “I condemn this unjust assault on the sovereignty of Ukraine that threatens security in Europe and the entire world, and I call on President Putin to halt all military action and restore peace.”

The US and allies, the former President said, “must stand with the people of Ukraine in support of their right to peace, security, and self-determination.”

Russia launched an invasion of Ukraine early Thursday, sending troops into the ex-Soviet nation from three fronts and firing missiles on several locations near the capital, Kyiv, in a broad attack that has drawn deep condemnation from world leaders. In the US, President Joe Biden unveiled harsh new sanctions meant to punish Moscow for its full-scale invasion, and his predecessors joined in castigating Russia’s move.

Former US Presidents Barack Obama, George W. Bush and Bill Clinton shared Carter’s sentiments, condemning the invasion in their own statements on Thursday.

“The American government and people must stand in solidarity with Ukraine and the Ukrainian people as they seek freedom and the right to choose their own future. We cannot tolerate the authoritarian bullying and danger that Putin poses,” Bush said in his statement.

Obama called for bipartisan support of Biden’s sanctions, saying,”There may be some economic consequences to such sanctions, given Russia’s significant role in world energy markets. But that’s a price we should be willing to pay to take a stand on the side of freedom.”

Clinton said that “the world will hold Russia and Russia alone accountable, both economically and politically, for its brazen violation of international law.”

On Wednesday, former President Donald Trump called Russia’s military operation in Ukraine “a very sad thing for the world” and claimed in a Fox interview that it wouldn’t have happened during his administration. But speaking to a conservative radio show on Tuesday hosted by Clay Travis and Buck Sexton, Trump had hailed Russian President Vladimir Putin’s dismembering of independent, democratic, sovereign Ukraine as an act of “genius.”