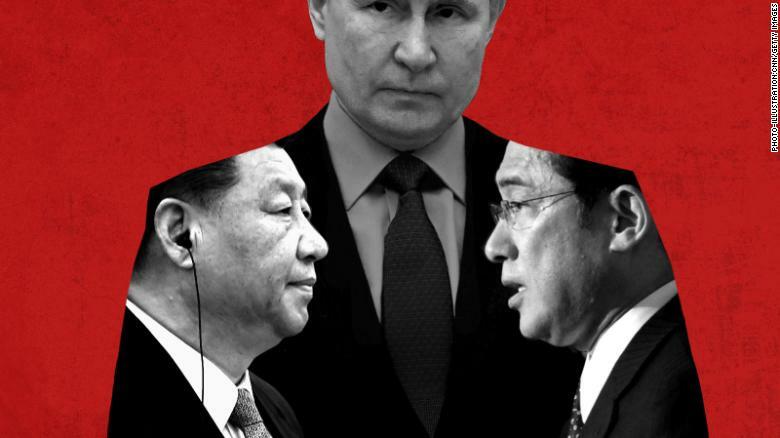 Japan has fallen into line with its international allies in imposing sanctions on Russia over Ukraine.

Japan has backed its condemnation of war in Ukraine with sanctions on Russian officials and oligarchs, but experts say they’re not the only audience for Tokyo’s outrage — China is meant to get the message, too.

Since Moscow attacked Ukraine, commentators have drawn comparisons between Russia’s actions and China’s stated ambition to seek the “reunification” of Taiwan with the mainland. The “what if” scenario has not been lost on Japanese leaders.

In the first days of the invasion, Japanese Prime Minister Fumio Kishida was quick to frame the Ukraine crisis as a global issue. “This is a very serious situation which doesn’t just affect Europe, but also Asia and the whole world order,” he told reporters.

And the Japanese public seem to be in lockstep with his views. In a country typically more focused on domestic issues, the war is dominating news coverage. Thousands of anti-war protesters have taken to the streets of cities nationwide, and a recent poll shows that over 80% of the 1,063 people surveyed support Japan’s economic sanctions against Russia.

For Japan, support for Ukraine serves a dual purpose, according to Yoko Iwama, an international relations and security expert at the National Graduate Institute of Policy Studies.

“The purpose of Japan’s response is to send a message that we will be ready and we will resist if there’s an invasion (of Japanese territory), that we will not allow the borders to be changed by force,” said Iwama.

“We don’t want a real war, the objective is political — that China is persuaded from an aggressive act like the one that Putin has taken in the last several days and weeks.”

It’s against that backdrop that Japan’s former prime minister, Shinzo Abe, raised a previously unthinkable suggestion during an interview three days after the Russian invasion.

Abe, still an influential figure in the ruling Liberal Democratic Party, floated the idea of Japan entering a NATO-like nuclear weapons sharing program — hosting US nuclear weapons on Japanese soil. It was a shocking proposal for country that suffered the devastating impact of the two atomic bombs dropped on Hiroshima and Nagasaki during World War II — but one Abe says should no longer be taboo.

Japan’s response to Russia’s invasion of Ukraine differs markedly to its actions after Moscow’s attack on Crimea in 2014.

Then, under Abe, Japan was called out for being too slow to act. Now its strategy is different — and the urgency arguably greater.

Back in 2014, Abe adopted the tactic of pulling Russia closer to prevent it tightening ties with China, said James Brown, an associate professor of political science at Temple University in Tokyo.

Russia had annexed the Ukrainian peninsula of Crimea by sending in armed forces to take over key facilities and foment a separatist rebellion that rumbled on for eight years.

Tokyo initially treated Russia’s annexation of Ukraine’s Crimea region as a Western issue, according to Sheila Smith, a senior fellow for Asia-Pacific studies at the Council on Foreign Relations.

“(The Japanese government) treated it a little bit like an issue for the Europeans and Americans to deal with; that it wasn’t really about Japan, but that they’d go along with it,” Smith said.

She said Abe harbored hopes that Russian leader Vladimir Putin would sign on to the normalization of Russia-Japan ties or a full peace treaty formally ending hostilities dating back to World War II.

But Japan’s softer stance against Russia drew international criticism, and Tokyo eventually joined its Western allies in imposing sanctions on Russia, including diplomatic measures consisting of suspending talks related to easing visa requirements, a travel ban and the freezing of certain individuals’ assets.

However, this year the scale and horror of the crisis unfolding in Ukraine has prompted Japan to push a consistent message of unity with its G7 partners to show it’s a “trustworthy partner,” according to Brown, from Temple University.

“You hear time and time again, the government say — ‘and alongside our G7 and other international partners, we will coordinate in taking a tough response on this issue’ — they don’t want to be seen as out of step,” Brown said.

Japan needs G7 support — particularly from the US — to contain any move from Beijing on Taiwan, the island which China claims as its territory despite having never governed it.

So last week, Japan added even more sanctions against Russia and Belarus — freezing the assets of an additional 32 Russian and Belarusian officials and oligarchs. And in a rare move, it also reviewed its guidelines on the transfer of defense equipment overseas, paving the way for the transport of bulletproof vests and helmets to Ukraine. Tokyo has also joined the push to cut Russia from the SWIFT banking system and has frozen Russian leader Vladimir Putin’s assets.

Experts says Japan wants to keep in step with its international allies in the face of the unfolding human tragedy and China’s growing military might.

For decades after World War II, Japan’s pacifist constitution prevented it from building up its military strength. Article 9 of the document said that “land, sea and air forces, as well as other war potential will never be maintained.”

But in recent years, the country has signaled a move towards greater military spending, and last December Prime Minister Kishida announced the government was exploring options to give it the capability to strike enemy bases.

China is considered a major threat, but the combined strength of Russia and China has put Japan under considerable pressure.

Last year, the two countries conducted what was billed as the first joint China-Russia naval patrol in the western Pacific. Vessels sailed through the Tsugaru Strait that separates Japan’s main island and its northern island of Hokkaido, before heading down the nation’s eastern coast and then back toward China through the Osumi Strait off the southern Japanese island of Kyushu. 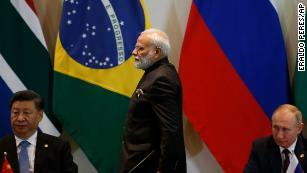 Foreign vessels are permitted to sail through the Osumi and Tsugaru straits — both international waters — but Japan closely monitored the maneuvers, which the country’s Defense Department called “unusual.”

Japan’s Ministry of Defense said on Friday that 10 Russian Navy vessels, including a frigate, had sailed through the Tsugaru Strait the previous day, toward the Sea of ​​Japan.

Japan has territorial disputes with both China and Russia. Last year, Japanese Defense Minister Nobuo Kishi told CNN the Senkaku Islands, known as the Diaoyu Islands in China, are unquestionably Japanese territory and would be defended as such. Japan also contests Russia’s claim to the Kuril Islands, an island chain off Hokkaido.

And then there’s Taiwan, which sits to the south in waters used to ferry 90% of Japan oil supplies.

Some say the Ukraine crisis on top of local security considerations shows it needs to commit even more.

But extra defense funding is just one aspect of Japan’s armor against an escalation of regional tensions.

Last month, Abe has used his position as former leader to raise another even more controversial prospect — the idea of hosting US nuclear weapons in Japan.

“Japan is a signatory to the Nuclear Non-Proliferation Treaty and has its three non-nuclear principles, but it’s essential to understand how the world’s security is maintained, and we shouldn’t treat those discussions as a taboo,” Abe told Fuji Television.

Japan falls within the US nuclear umbrella but has long ruled out hosting nuclear weapons due to devastation wrought by atomic bombs dropped during World War II.

When asked about Abe’s comments in a regular press briefing, China’s Foreign Ministry spokesman Wang Wenbin said Japanese politicians had made “wild comments” that “openly violate its own Three Non-Nuclear Principles and the obligations of a party to the Nuclear Non-proliferation Treaty (NPT).”

“By raising nuclear sharing with the US, Japan has fully exposed the dangerous tendency of lingering militarism in the country,” he added.

In the interview, Abe also called for the US to take a more explicit position on the defense of Taiwan over whether or not it would defend the self-ruled island if Beijing were to attack.

Last year, US President Joe Biden said the US would defend Taiwan if it were to come under attack from China, a comment that seemed incongruous with America’s stated policy of “strategic ambiguity.”

However, later a government official said the US was not announcing any change to its policy on Taiwan — under the “One China” Policy, the US acknowledges China’s claim of sovereignty over Taiwan.

One thing is clear: Russia’s attack on Ukraine has rattled the Japanese and has forced them to face questions some might otherwise avoid.

“These are all recent questions that have been bubbling up under the surface, based on the capabilities first of North Korea, but also China. And I think that’s also being laid bare as Putin uses nuclear threats,” she added.