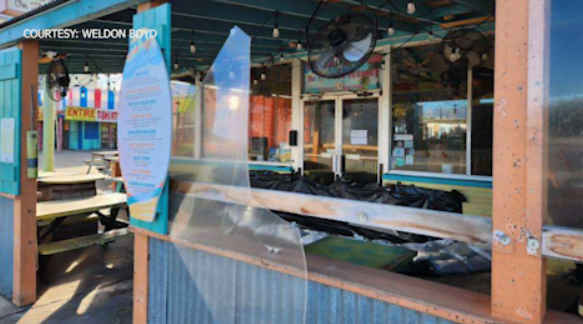 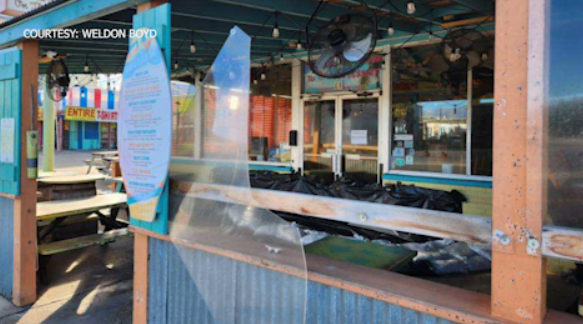 The storm took a big bite out of the Cherry Grove Pier and left behind a trail of damage to sand dunes and trees. It also damaged many roofs, businesses and signage across the city.

“It’s messy down here,” said Sal Mazzurco, who works for Pivot Parking. “We had some roofs blow off businesses on Ocean Boulevard. Our value lot down there a big oak tree shattered inside the lot.”

Before the storm hit, Weldon Boyd, the owner of Bouy’s on the Boulevard, prepared for the hurricane by making barricades to prevent water from coming inside his building.

“So I stood on the front porch pretty much the entire hurricane,” he said. “We got up to about seven inches of water in the patio and about a foot in the street.”

He said the area stayed flooded for about three or four hours and that he was glad he made barriers.

“None of the water made it through the barricades,” he said. “I was excited. That was a big thing for me. I spent like two nights studying on how to build the perfect barricade. We used a combination of plastic, water tape, sandbags and quick dam bags.”

While the water didn’t get inside, he said the outside of the building has damage that could be costly to repair.

After the hurricane, Boyd said the community showed has shown a lot of support for the bar and grill.

“We had a killer night, [Saturday],” he said. “Everybody came out. We probably did 600 people that night. It was wild.”