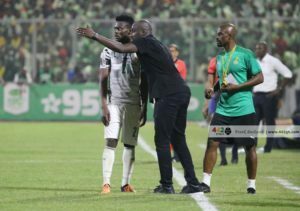 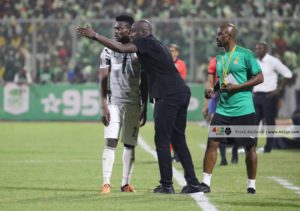 Ghana coach Otto Addo has disclosed that he could not hide his excitement after beating Nigeria in the final World Cup play-offs to qualify for the World Cup itself.

The first leg in Kumasi ended goalless, and goals from Thomas Partey and William Troost-Ekong ensured the return game also ended all square to leave the tie at 1-1 on aggregate after 180 minutes, but the Black Stars claimed the ticket to Qatar 2022 on the away goals rule.

By virtue of the qualification, Addo became the first Ghanaian to have represented Ghana at the World Cup and also qualified the team to the Mundial as a coach.

“We had some bad luck initially because we had a lot of injured players before the first game. I think I had to make do without eight players that I wanted to select. On top of that, two others were suspended,” he told FIFA.

“So there were a lot of absentees but that opened the door for new players, for debutants. There were a lot of question marks before the game against Nigeria but the boys adapted well to the different ways Nigeria play. We did well given the circumstances, with all the injuries, the new players and a new coaching team.

“There were mixed feelings at the end. It was only two days later that the penny dropped that we’d qualified for the World Cup. And it was a fantastic feeling.”

Black Stars. who are the lowest-ranked team at the tournament have been drawn in Group H alongside Portugal, South Korea and Uruguay.

Ghana will take on Portugal in their first game on November 24 before playing South Korea and Uruguay on November 28 and December 2 respectively.

23 players have currently reported to camp and arrived in the Abu Dhabi on Monday evening.

The team will stay in the capital of the United Arab Emirates for four days where they will play an International friendly against Switzerland at the Baniyas club stadium on Thursday, November 17, 2022.

Ghana secured a 4th FIFA World Cup tournament having participated in 2006, 2010, and 2014 in Germany, South Africa, and Brazil after drawing 1-1 against Nigeria in the return leg of the final play-offs at the Moshood Abiola National Stadium in Abuja to seal qualification on the away goals rule.

Only three sides from the continent have ever progressed to the quarter-finals; Cameroon in 1990, Senegal in 2002, and Ghana in 2010.

Ghana will be hoping to progress from the group stage at this year’s tournament.