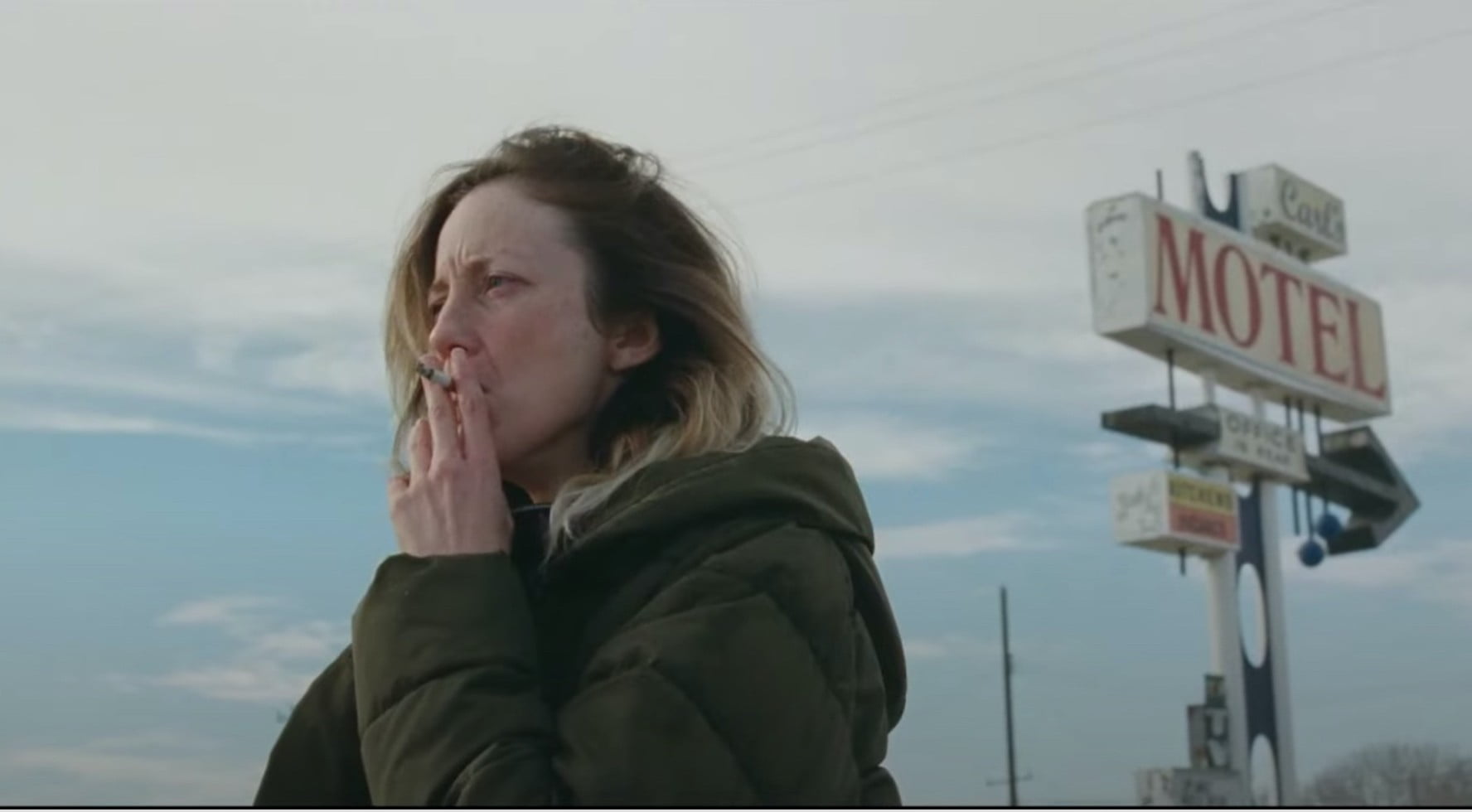 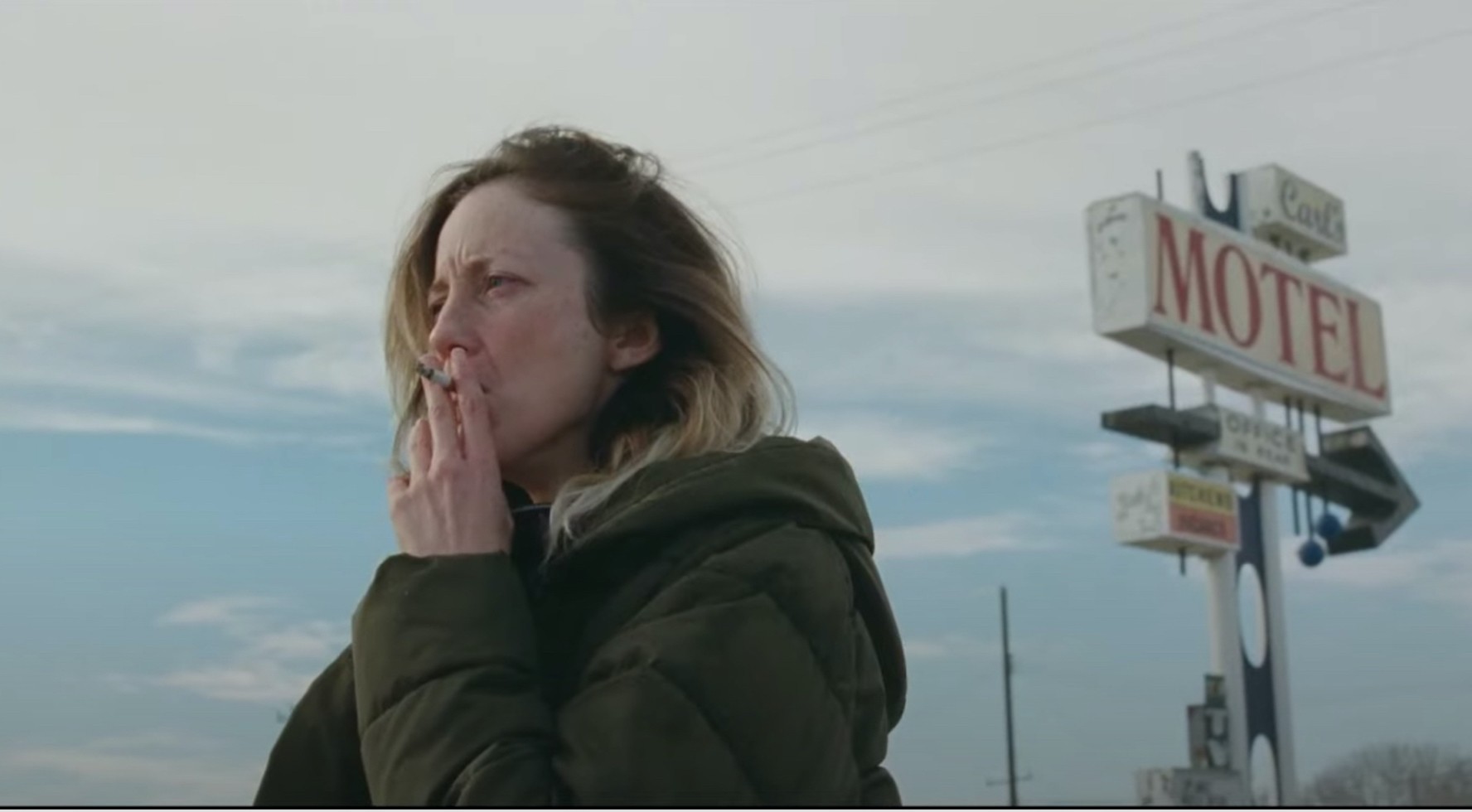 On the ravages of alcoholism … and Pinhead.

“To Leslie” induces dread from its early frames on. There’s news footage of a 30ish woman, Leslie (Andrea Riseborough), who has won a lottery for $170,000 dollars or so. She is ecstatic while her young son is uncomfortable. As Leslie gushes on hysterically, you know that this isn’t a woman who’s going to do anything productive with that money. Drunk on a sense of possibility that she’s never known, and probably loaded, she’s destined to fritter the money away. Her son, who has the preternatural gravity of a child in an abusive situation, knows this. But Leslie carries on, savoring her fleeting moment.

There have been plenty of movies about drunks, some of them extraordinary, but few have captured the gulf that exists between sozzled and functional people as mercilessly as “To Leslie.” In that news footage, we see a wonderful moment for Leslie and understand that for everyone else it’s humiliating or embarrassing. The pain on that boy’s face, which director Michael Morris allows you to notice for yourself, charges the film with unrelenting tension.

Cut to a decade later. The money’s gone and Leslie’s borderline homeless, living in a motel room she can’t pay for and cadging drinks in bars from men, oblivious to the fact that her seductress days have been cut short by the ravages of booze. Once again, “To Leslie” evinces a rare and uncanny double awareness, allowing us to understand these moments in terms of how Leslie experiences them and how everyone else sees them simultaneously. She is pitiful, but the film isn’t maudlin or even exactly hopeless. A fire is clearly burning in Leslie. She’s channeling her intelligence and creativity in a self-annihilating fashion because her demon has her pinned to the mat with her limbs twisted up. But she hasn’t tapped out yet. Leslie’s very obnoxiousness testifies to her will.

Morris and screenwriter, Ryan Binaco, commit themselves to rendering Leslie’s hell. For half of the film’s running time, or what feels like it, you are side by side with Leslie as she steals money, alienates family and acquaintances, and drinks, drinks, drinks, drinks. Her boy, James (Owen Teague), has grown into a haunted young man who works long hours at a dull job and lives in a small apartment with a roommate and neighbors who’re only a few paces away. Many of us have been there too. James doesn’t have the self-righteous indignation that usually characterizes adults with parent issues in movies; he’s poignant because Teague, in a lovely, suggestive performance, allows us to understand that he’s holding most of his emotions in check to survive. The courtly way he treats Leslie when she disastrously crashes at his place is heartbreaking, and her failure to see it is even worse, even more brutally truthful.

“To Leslie” is one of the most lived-in portraits of a drunk that American cinema has offered. Most movie pabulum has been discarded. Leslie’s histrionics are not actorly and cool—hers is not the fantasyland alcoholism of Al Pacino’s character in “Scent of a Woman,” or the glamorously lacerating alcoholism of the Richard Burton and Elizabeth Taylor characters in “Who’s Afraid of Virginia Woolfe?” We as a society have such a neurotic relationship with alcohol that even our cautionary tales resemble drinking ads.

Drinking is a sign of virility and wealth, bound up in mating rituals and networking. We like the phrase “drugs and alcohol,” when alcohol is itself a drug, one that’s as addictive and destructive as any in circulation. We judge drunks, who violate the social contract of drinking the “right way,” but teetotalers seem weird too. By contrast, “To Leslie” clears the air and straightforwardly shows what it looks and feels like when a person is willing to flush their life down the commode in order to keep drinking. Every detail—the quaking of hands during profound hangover, the flush of blotchy skin—is unceremoniously right.

I have seen Andrea Riseborough in several high-profile things, most notably Brandon Cronenberg’s “Possessor,” but until now I’ve never formed a solid opinion on her. As Leslie, though, Riseborough is astonishing—a successful British woman playing a down-and-out Texan drunk without distance or condescension. Riseborough juggles an array of tones, oscillating between pride and desperation and everything in between, sometimes within microseconds. You feel that you can see Leslie’s gears turning, from the lilt in her voice to the electrified tension of her posture. There is a whirring of activity in the performance—an awareness of alcoholism as a high-wire act—that keeps it from growing deadening and miserabilist. Most important, Riseborough is never unaware of the ferocious, bottomless need that drives this infuriating woman with a hole in her soul.

As Leslie finds a path, falling into a job at a motel and a relationship with a man that Marc Maron, another famous recovering alcoholic in real life, plays with weathered grace, it might seem to some that “To Leslie” is finally succumbing to fairy tale nonsense. But salvation is possible—sometimes there’s a brief lightning bolt moment where a drunk achieves enough self-awareness to break a cycle of destruction. It’s usually not a big “Hollywood” moment, and to the filmmakers’ credit it isn’t for Leslie either. The thunderbolt moment isn’t enough on its own though; after that, pain and work lie ahead, which “To Leslie” also portrays. Such lightning bolts are so unlikely and wonderous as to suggest an authentic miracle. No wonder it’s so easy for former drunks to believe in God.

God doesn’t have much of a place in a “Hellraiser” movie of course, and in the case of the new remake—really more of a sequel—there isn’t much of a place for originality either. This is another movie with young people who all look kind of the same, scrubbed up fresh for TikTok or whatever, running afoul of creatures who’ve long lost their resonance. To be fair, Clive Barker’s 1987 “Hellraiser” never made much sense either: the notion of equating sadomasochism to demonic dismemberment sounds rather conservative and hysterical, but, hey, it was the 1980s, and you could still admit to feeling shame back then. In our strenuously empowered present day, shame is, well, shameful.

A clever “Hellraiser” might’ve dealt with such a change in morale, but director David Bruckner updates Barker’s closeted subtext by merely discarding it. The new “Hellraiser” initially suggests that the demons at its center, iconic Pinhead and his fellow Cenobites, will be a metaphor for addiction, as one of the protagonists has a drug issue that kicks the plot into motion. But that’s window dressing. This is a studiously impersonal film, a kind of haunted house exhibit with the Cenobites that happens to run an unforgivable two full hours. In fact, the new “Hellraiser” bears a resemblance to the remake of “House on Haunted Hill” from the late 1990s.

Bruckner, who directed the more accomplished yet equally dull “The Night House,” which, weirdly, is more in touch with the spirit of Barker’s “Hellraiser” than his actual “Hellraiser” movie, is not a hack. There are images, particularly of the monsters, which are the only reason anyone sees an 11th “Hellraiser,” that have a classical beauty and a sense of atmosphere. With a script like this, though, he might as well be directing traffic. “To Leslie” is far scarier, far more in touch than any “Hellraiser,” past or present, with the annihilating properties of hunger.

“To Leslie” is now on VOD. “Hellraiser” is available to stream on Hulu.