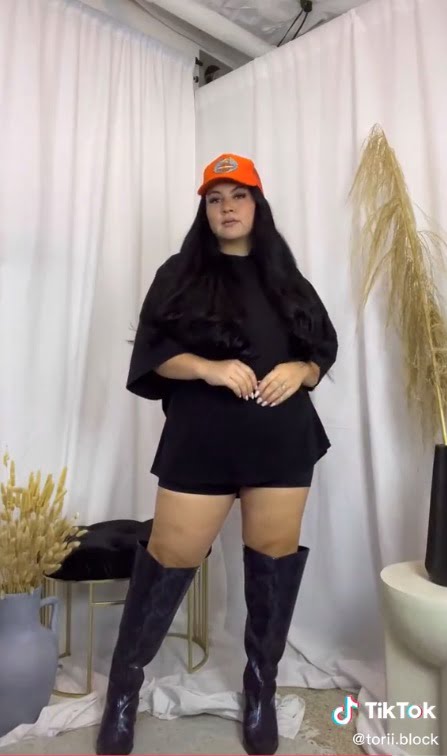 A PLUS size TikToker has shared her hack for styling boots in the fall to flatter wider calves.

Tori is a content creator who makes videos mostly about fashion as a size 18 woman.

TikToker Tori creates fashion content for plus size people for her over 200,000 followers[/caption]

She has over 268,000 followers on TikTok and consistently gets thousands of views, however, a recent video has gained over a million.

“Let’s get dressed,” the text in the video says.

For her outfit, Tori wears a pair of black bicycle shorts and a black, oversized T-shirt, along with an orange trucker hat.

BATTLE OF THE BULGE

In order to accentuate the shirt to her figure, Tori turns the shirt inside out and places two safety pins on each side of the shirt below the sleeve.

Using a shoe lace through both pins, Tori suggests tying a bow and tightening it however you want.

“Turn inside out and you have an altered dress!”

In the caption of the post, Tori calls the trick “one of my favorite hacks of all time.”

She ties the look together with a pair of metallic blue boots.

In the comments, Tori clarified that they were wide-calf coots.

“They fit my 20” calves!” she said with a praying hand emoji.

She received over 500 comments with many viewers praising her fashion choices and complimenting the hack.

“I struggle with my self image and seeing women who are the same size as me makes me feel so much better about myself,” wrote one person.

“You are absolutely stunning.”

Another wrote: “Ah! Finally found someone with the same body shape!

“Very excited to binge your videos!”

In a recent video, she revealed how she styles boots to flatter her fuller figure[/caption]