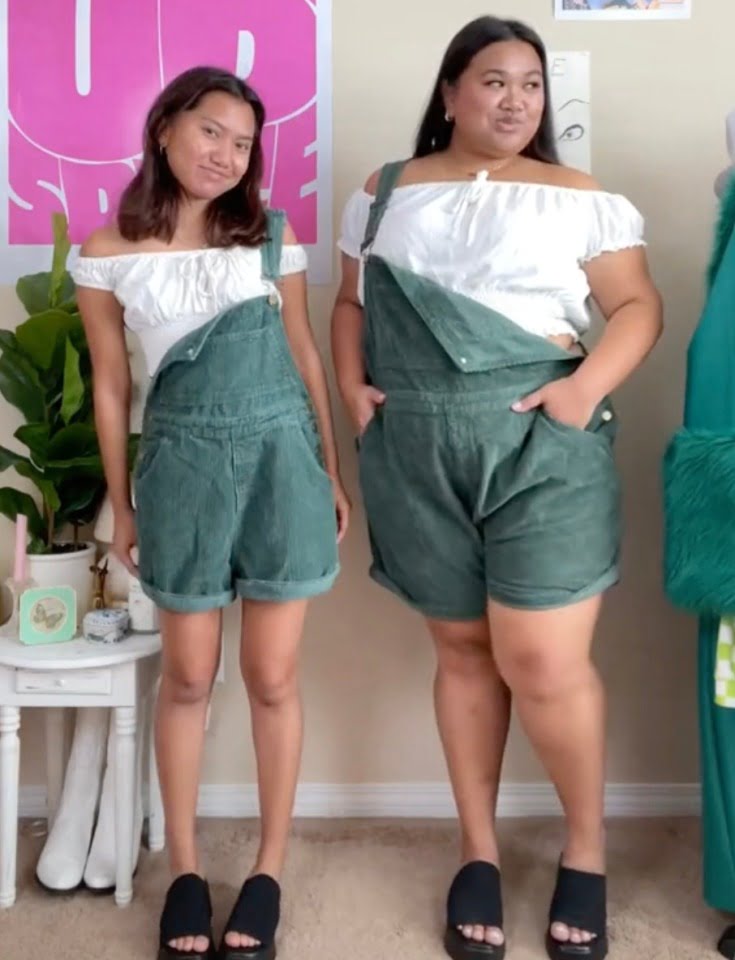 ALTHOUGH different sizes, one pair of sisters still make it work when it comes to wearing matching looks.

Lauren Licip posted a series on TikTok in which she and her sister Mikaela try on the same outfits, and their Princess Polly shopping haul looked stunning on both of them.

“The same outfit on 2 different body types,” text read in the video while the sisters first stood in bathrobes.

Lauren is a size 18 while Mikaela is a size 00 and around half a head shorter.

The song “SOS” by ABBA played while the sisters showed off their looks.

Lauren wore Princess Polly’s Diego Tank for $39. It fell slightly above her shorts.

She also appeared to be wearing the brand’s Lexie Lightwash Denim Shorts, currently on sale for $28. The mom short style landed right above her knees.

While Mikaela wore the same shorts, they landed mid-though on her. She opted for a near-identical tank top from Brandy Melville that slightly flared away from her torso.

For their next outfit, the pair wore the Kacey Overalls in a green khaki color. They both styled the $70 piece with one strap over the shoulder and one down.

They also both wore white off-the-shoulder puffy shirts. While the style doesn’t currently seem to be on the Princess Polly website, it resembles the Love Galore Top, which costs $42.

The duo paired their trendy outfits with black platform sandals.

Then they changed into whimsical white ensembles. While they looked like minidresses, they were actually the Love Galore Romper, which costs $68.

The ruched top and fitted torso flared out into tiered ruffled shorts. The hem landed high up on both sisters’ thighs.

They shared in the comments that Lauren wore Abercrombie & Fitch jeans while Mikaela wore a similar pair from Zara.

The duo stunned in their identical outfits and showed that size doesn’t matter, especially when it comes to having style and being confident.

The duo received loads of compliments on their outfits.

“Both of you look adorable in all of these!!!” one person wrote, while another added: “I’m crying y’all r so cuteee.”