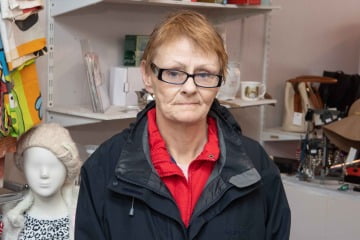 SHE’S a pro at finding stylish items when she embarks on her charity shop hunts.

And there are a few things that are always on Faye De Lanty’s list to look out for when she hits the stores – with men’s belts being one of them.

She took to her TikTok page to explain, as she said: “One of my favourite places to look is the men’s belts.

“I always go for extra long because you can do this really cool little trick here that you’ll see on designers like Vivienne Westwood or Alexander McQueen.”

Faye then took a black belt from the £1.15 section, and demonstrated the way she’d wear it.

“You put the little tooth there, right on the corner, bring the bottom bit up so you’ve got this little loop, and put it through here,” she said.

AS SEEN ON STARS

“And you get a really nice elevated look and these belts are $2.

She was quickly praised for sharing the style hack by people in the comments section.

“Thank you for breaking that down for me! I love that look,” one wrote.

While a third commented: “I have wanted to buy one of these!! off to thrift…”

“this changed my life,” someone else wrote.

As another commented: “This is genius!”

Major change to childcare rules set to save money for parents

“Thank you so much!” Faye replied.

“It’s such a fave hack of mine , must do my sleeve rolling trick for you guys soon too.”