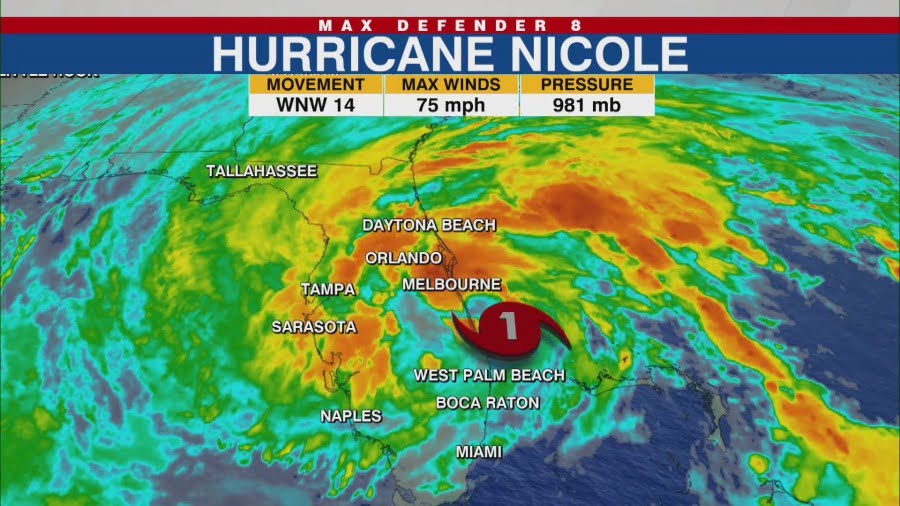 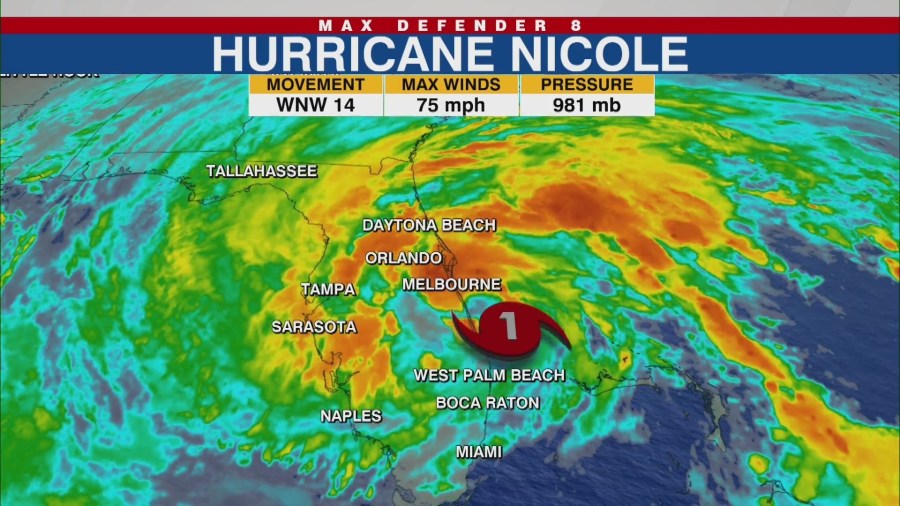 Nicole is the first hurricane to make landfall in the US this late in the season in 40 years. It’s the third time on record a hurricane had struck Florida in November.

At landfall, Nicole had maximum sustained winds of 75 mph, making it a Category 1 hurricane. The storm was about 15 miles north-northwest of Fort Pierce, Florida, moving west-northwest at 14 mph.

The storm is forecast to weaken as it moves across central and northern Florida into Georgia on Thursday, then across the Carolinas Friday. It will likely be a post-tropical cyclone by Friday afternoon, the NHC said.

“Do not focus on the exact track of Nicole since it’s expected to be a large storm with hazards extending well to the north of the center, outside of the forecast cone,” the center said. “These hazards are likely to affect much of the Florida peninsula and portions of the southeast United States.”

The Tampa Bay area area should see winds with speeds of 20 to 40 mph, but wind gusts of up to 50 mph are possible.

Florida should see 3 to 5 inches of rain with some areas seeing isolated amounts of 8 inches. Highlands, Polk and Citrus counties will likely see 3 to 6 inches of rain. The rest of the area could see 1 to 3 inches or slightly higher amounts.

The NHC warned flash and urban flooding and a few tornadoes are possible.

“Flooding is not a huge concern with Nicole [in Tampa Bay] because the ground has had time to dry out since the flooding seen with Hurricane Ian. River levels are all back to normal and any rain that does fall, will first soak into the ground before moving toward the rivers. The Tampa Bay area will also see far less rain than Hurricane Ian brought,” said Storm Team 8 Meteorologist Amanda Holly.

Swells generated by the storm — which can cause life-threatening surf and rip conditions — will likely affect the northwestern Bahamas, the east coast of Florida, and much of the southeastern United States coast over the next few days.

A hurricane warning is in effect for:

A tropical storm warning is in effect for:

A storm surge warning is in effect for:

A hurricane watch is in effect for:

A storm surge watch is in effect for: