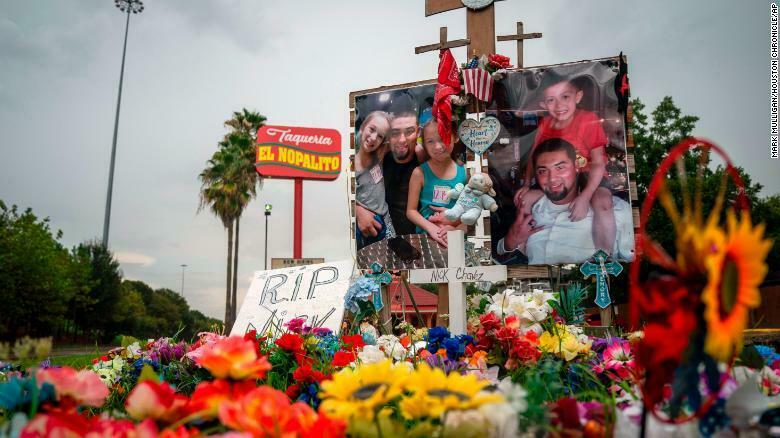 Four Houston Police Department officers who were indefinitely suspended in September 2020 in the deadly shooting of Nicolas Chavez will be reinstated, according to the department’s police chief.

One sergeant and three officers had appealed the suspension that followed the shooting of an apparently emotionally disturbed man who was on the ground, wounded and incapacitated, before a final barrage of 21 shots.

HPD Chief Troy Finner announced in a news conference Monday the city was unable to prove each officer violated the rules and policies cited in their suspension. Therefore, Finner said, an arbitrator ruled the officers must be reinstated.

Although he was not the final decision maker, Finner said he believes when the officers were indefinitely suspended there was evidence of policy violations.

Then-police chief Art Acevedo said at the time the four officers were fired, but a police spokesperson said Monday the officers had been indefinitely suspended.

“I’m disgusted,” Leantha Chavez, Nicolas Chavez’s mother, said in an interview with CNN on Monday. “My son was murdered by them and they know it.”

“These men are getting their jobs back just so they can do it again,” she said. “They are supposed to help us, not hurt us.”

Acevedo said toxicology tests revealed Chavez had methamphetamine, amphetamine and ethanol in his system when he died.

“Hey, bud, we’re here to help you, man,” one officer is heard saying.

Houston Police Officers’ Union officials at the time said the encounter lasted about 15 minutes, during which the officers attempted to de-escalate the incident by retreating, firing bean bags and using Tasers on the man before resorting to lethal force when he pointed a stun gun at them.

Joe Gamaldi, union president and also national vice president of the Fraternal Order of Police, tamped down speculation the incident was racially motivated. Chavez was Latino, he said. Three of the officers are Latino and the fourth is married to a Latina.

“It was clear … these officers did not want to shoot Mr. Chavez and did everything in their power not to,” Gamaldi told reporters.

Acevedo had said even after repeated verbal warnings, the deployment of multiple soft impact rounds and Tasers, Chavez was still “armed with a metal object and began moving quickly toward” the officer who fired the first two shots. He also called the barrage of gunfire at the end unreasonable.

Chavez’s father, Joaquín Chavez, told CNN at the time his son had struggled with depression and anxiety but didn’t know what his son was going through the night died.

“He had his issues. He went through a lot. I just don’t understand,” he said. “I don’t think I’ll ever find out why he was out on the street that night.”

A grand jury failed to indict the officers last year on charges related to the shooting, according to CNN affiliate KTRK.

Officers will be retrained, chief says

The four officers will receive back pay for the time they were suspended and will need of training, according to Finner.

“They’ve been away from the department almost two years, and there will be reintegration training — also additional training, just as any other officers who are involved in critical incidents,” Finner said.

In a statement emailed to CNN, Houston Mayor Sylvester Turner said, “I reviewed the video shortly after the shooting of Mr. Chavez and was disturbed by what I saw. The city dismissed the officers, but the independent hearing examiner has reinstated them.”

He added, “It is important that before any consideration is given to placing these officers back on the street, they be retrained and fully understand the policies of this city. Mr. Chavez’s family lost a loved one, and even though the hearing examiner has reinstated these officers, no one should be rejoicing under the circumstances.”

Finner asked for prayers for the Chavez family and asked that everyone respect the process, saying it’s a difficult time for the family, the department and the community.