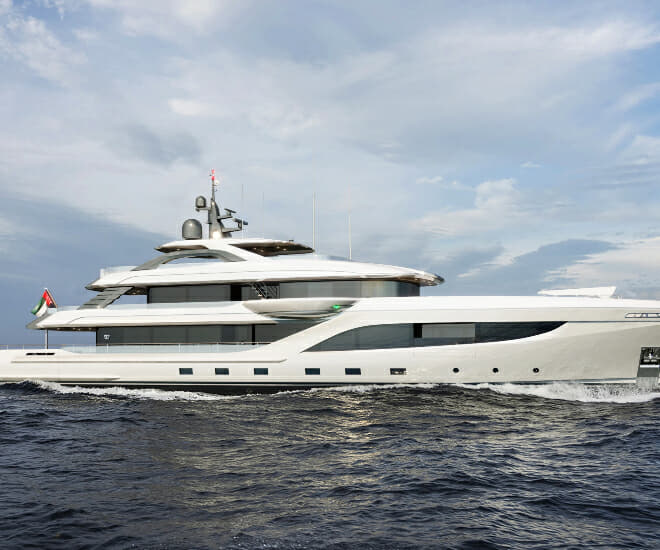 Gulf Craft unveiled its plans for the all-new Majesty 160, which will be the company’s second largest superyacht and follows the announcement of the Majesty 111 at this year’s Dubai International Boat Show.

Mohammed Alshaali, the co-founder and Chairman of Gulf Craft, said: “The Majesty 160 is an evolution of our Majesty 155 and follows the new design precedent of our Majesty line-up, which was introduced earlier this year with the Majesty 111.

“The Majesty 160 will be our second-largest vessel and will be a class apart in its segment, catering to the needs and requirements of customers through its exceptional design, architecture and state-of-the-art engineering and technological features.”

The Majesty 160 has two pairs of zero speed carbon fin stabilisers, twin 100kW generators and solar panels at the top of the sun deck roof capable of powering one of the generators, so reducing fuel consumption.

Exterior areas include an expansive sun deck with modular and moveable furniture along with an infinity pool and a customisable, multi-purpose beach club that can be used as a lounge, bar area, gym or health club. The swim platform provides easy access to the water, while fold-down balconies on both sides expand the sunbathing and social areas.

The smart layout has an innovative climate control system and accommodates up to 12 guests across its seven staterooms, which include a full-beam master suite forward on the main deck that includes a private lounge, retractable balcony and a large bathroom with both bath and shower room. The yacht can also accommodate up to nine crew.

Wing stations on the main deck aid manoeuvring in and out of tight marinas and ports, while options include a helm station on the sun deck. The Majesty 160 draws just 2.3m so can cruise shallow areas, enabling close beach access due to its ground-breaking engineering and use of a lightweight, sturdy composite hull.

“Our ongoing expansion plans, extensive global dealer network and a distinct product portfolio have seen us build a strong foothold in international markets, especially in Europe and the United States, where we have witnessed a demand for larger lightweight yachts which provide competitive fuel economy and easy access to shallow waters,” Alshaali said.

“We have listened to our customers and have created the Majesty 160, which reinstates our position as the world’s leader in composite hull production.”

The post Gulf Craft Announces the Arrival of Majesty 160 appeared first on LUXUO.