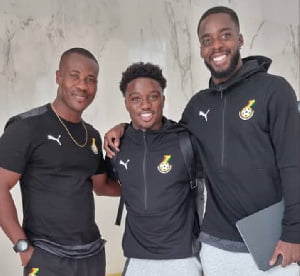 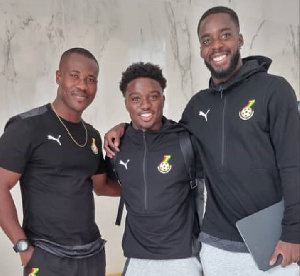 Ghana’s President Nana Akufo-Addo has commended the Ghana Football Association President, Kurt Okraku for dual-nationals’ injection into the Black Stars ahead of the World Cup.

Addressing the Ghana FA delegation led by Kurt Okraku at the office of the Presidency, Nana Akufo-Addo credited the leadership of the Ghana FA for the role played in getting diaspora players to join the national team.

“We should have no grounds for complains, the important thing is that, all of us as a nation, that we give maximum support to our young people to go and give of their best and if they able to give off their best they will far because Ghanaian football is among the best in the World”

“Of course, with the usual luck that you need in football, instead of the thing hitting the bar, it goes in. so we have to pray that the good Lord favours us on such occasions and if it does, I have a lot of confidence about the quality of the people that has been selected”

“I’m happy that many of the diaspora players under your leadership are being brought in as much as possible those who have the heart for the country are being brought to come and play. I think you’ve done well and going on, go out to search for those interested to play for the country. Our bid is to create the condition for them to excel and that’s what we have to do”

The Black Stars will begin preparations in the first week of November, but a full house is expected in the second week, when all leagues will draw to a halt.

Ghana is scheduled to play one pre-World Cup match, against Switzerland, on November 17.

The West African powerhouse will kick off on November 24 with a crucial match against Group H favourites Portugal.

The Black Stars will then play South Korea on November 28 and Uruguay in their final group match on December 2.