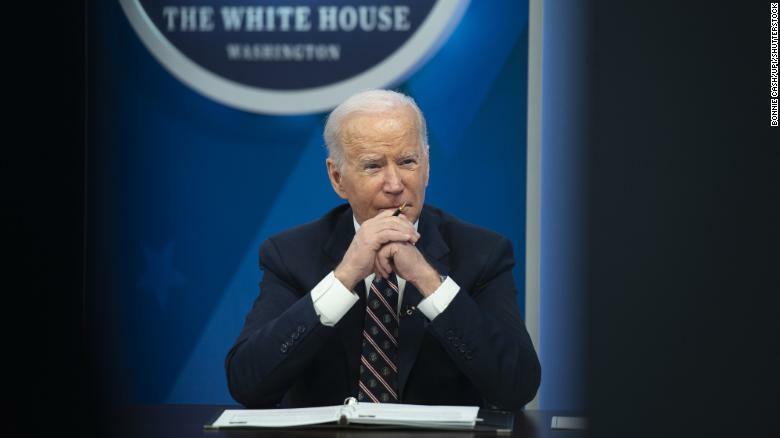 Russian President Vladimir Putin has defied the West, recognized two separatist-held regions in Ukraine as independent states and appears to be sending in his own troops — he’s calling them “peacekeepers” — to the contested regions.

US Ambassador to the United Nations Linda Thomas-Greenfield described Putin’s use of that term, “peacekeepers,” as “nonsense.”

Europe and the US announced tough new sanctions meant to isolate Russia from the Western banking system, cut off some of its natural gas market and punish Russian oligarchs who could have sway with Putin.

Meanwhile, Russia is also pulling diplomatic staff from Ukraine, according to CNN’s Nathan Hodge in Moscow.

“The beginning of a Russian invasion.” In remarks from the White House on Tuesday, President Joe Biden stopped short of saying that Russia invaded Ukraine, full stop.

“To put it simply, Russia just announced it is carving out a big chunk of Ukraine,” Biden said, referring to Putin’s recognition of Luhansk and Donetsk, both in the contested Donbas region, and arguing it is Putin’s way of creating a rationale to go farther into Ukraine.

“This is the beginning of a Russian invasion of Ukraine,” Biden said, before declaring, “Who in the Lord’s name does Putin think gives him the right to declare new so-called countries on territory that belonged to his neighbors?”

Why has the White House started using the word “invasion”? CNN’s Kevin Liptak, Jeremy Diamond and Natasha Bertrand report it did so only after assessing the situation on the ground in eastern Ukraine, according to administration officials.

It is not clear what information led to the change, and the White House declined to provide specific intelligence that might further explain the shift in tone. The new language emerged Tuesday morning on CNN, where deputy national security adviser Jon Finer said, “We think this is, yes, the beginning of an invasion, Russia’s latest invasion into Ukraine.”

“An invasion is an invasion and that is what is underway,” Finer said.
Biden used similar language later in his speech from the White House, calling it “the beginning” of an invasion.

New sanctions. Biden announced sanctions to punish two Russian banks and cut off the Russian government from Western money.
Germany, importantly, hit pause on the Nord Stream 2 pipeline, which goes around Ukraine and is meant to get natural gas more easily from Russia into Europe.
More sanctions in reserve. Biden stopped short, however, of imposing every possible sanction on Russia and said more measures would follow if Russia does not change course.
Both the US and Europe appear keen to hold some sanctions back to use as leverage at a later point.

Luke McGee talked to a senior European Union diplomat who said the thinking as of Tuesday morning was that the West needs to take severe action against Putin for his most recent steps but keep the option open to go further should Putin escalate again.
Putin has been prepping for this. Multiple reporters and analysts argued Putin has been squirreling away money and preparing for these sanctions.
“Russia has been deep in the process of inoculating itself against these Western sanctions. I don’t think, sadly, this will be much of a deterrent,” said Michael Bociurkiw, the former spokesman for the Organization for Security and Cooperation in Europe, appearing on CNN just after Biden’s announcement.

How will these sanctions hurt? CNN’s Charles Riley looks at the sanctions imposed by the US, the European Union and the United Kingdom and explains how they will hurt Russia in the near term.
He also writes about what sanctions could come next and hurt Russia more. His ideas for additional sanctions:
US — target more Russian banks. Riley says that beyond the two announced Tuesday, the US could sanction more of the country’s biggest banks. He adds that the US could restrict exports that could hurt Russia’s manufacturing and affect its imports of smartphones and automobile components.
Europe — cut Russia off from Belgium-based SWIFT. The global messaging service is used by banks and is an essential part of the world economy. That single move could force the Russian economy to shrink by 5%, he writes.
UK — kick out the oligarchs. Many rich Russians prefer to live in the West and have taken advantage of investor visas in the UK. Stripping them of the privilege of spending time in London could be effective.

The West needs to assume the sanctions won’t work. Former US Defense Secretary William Cohen, who served under President Bill Clinton, said he was not at all optimistic the new sanctions would have any effect on Putin — and that the US already needs to be preparing for other ways to contain him.
“What happens after the sanctions?” Cohen asked, talking to CNN’s Dana Bash. “What happens if (Putin) goes in? What is the policy here in the States?”
RELATED: As the West condemns Russia over Ukraine, Beijing strikes a different tone
Disputed borders. One complication in assessing a Russian invasion is that there are multiple borders.
“There’s some ambiguity about what the borders of these self-declared republics actually are,” said CNN’s Clarissa Ward, appearing from Kyiv on Tuesday before Biden spoke. “There are the borders as they stand, the front lines as they stand and there are the borders as have previously been outlined by these separatist leaders.”

This is an ongoing war in Ukraine. There has been fighting in the region since 2014 and more than 14,000 people have died as a result. Portions of eastern Luhansk and Donetsk have been in the hands of Russian-backed separatists ever since.

Zelensky described Russia’s actions as a form of “legal aggression” to create a “strong foundation” for possible further military escalation in the Russian-backed eastern breakaway regions.

Why Putin believes Ukraine should not exist. When Putin spoke Monday night, recognizing the separatist regions, Hodge notes, the Russian leader gave a sort of revisionist history lesson that explains his worldview:

Professional historians will have their hands full for a long time deconstructing and debunking some of Putin’s historical generalizations. But if you’ll pardon the distillation, it runs like this: Vladimir Lenin and the Bolsheviks created the Ukrainian Soviet Socialist Republic; Joseph Stalin expanded it after World War II by annexing territory that previously belonged to Poland, Romania and Hungary; and then Nikita Khrushchev (who led the Soviet Union during the height of the Cold War), for some unknown reason, took away the Crimean Peninsula from Russia and gifted it to Ukraine. Et voila! Modern Ukraine is merely a fiction.

New rules of security. Regardless of what happens next, there is a sense that the seal of European security has been broken.

“There are no longer any rules for stability and security in Europe today,” French Foreign Minister Jean-Yves Le Drian said Tuesday at a news conference announcing sanctions against Russia. “The tools, the treaties, the legal acts that, until now, have ensured stability in Europe are all obsolete.”