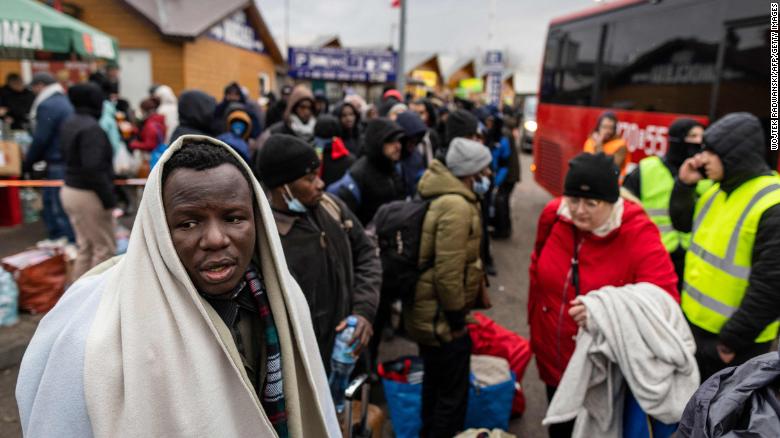 Ijantkar said many of the students waited for at least a day, but she eventually turned back to Lviv because she was terrified, waiting in freezing temperatures with no food, water, or blankets.
“I saw people shaking so terribly in the cold, they were collapsing because of hypothermia. Some have frostbite and blisters. We couldn’t get any help and (were) just standing for hours,” she said.

Andriy Demchenko, a spokesman for the Border Guard Service of Ukraine told CNN Monday that allegations of segregation at the borders are untrue and that the guards are working under enormous pressure at the borders — but are working within the law.

“From the day when (Russian President Vladimir) Putin has made an attack on Ukraine, the influx of people trying to leave Ukraine and the war zone has increased tremendously. If earlier, people trying to cross the border into the European Union and back amounted up to 50,000 (people) a day, now the amount doubled and continues to increase. There is huge pressure on checkpoints, on border guards.

“In order to speed up the process and allow larger amounts of people to cross, the government has simplified the procedure of the border crossing as much as possible. Due to the increase in the volume of the individuals crossing, people have to stay in long queues. However, I can state that everything happens according to the law. There is absolutely no division by nation, citizenship, or class at the border,” Demchenko said.

Ukraine attracts many foreign students wanting to study medicine because it has a strong reputation for medical courses and tuition — and other expenses are much lower than in programs in other Western nations.
Another stranded student told CNN on Sunday that border staff on the Ukrainian side of the border were showing prejudice against foreign students.

“They are depriving the foreigners. They are being very racist with us at the border. They tell us that Ukrainian citizens have to pass first while telling foreigners to stay back,” said Nneka Abigail, a 23-year-old medical student from Nigeria.

“It’s very difficult at the moment for Nigerians and other foreigners to cross. The Ukrainian officials are allowing more Ukrainians to cross into Poland. For instance, around 200 to 300 Ukrainians can cross, and then only 10 foreigners or 5 will be allowed to cross… and the duration of time is too long. It’s really hard.. they push us, kick us, insult us,” Abigail said.
Africans have been sharing their experiences online using the hashtag #AfricansinUkraine. Their stories have prompted an outcry and a number of crowdfunding appeals have been launched to try help those stranded in the country.

One of those who shared their story online is Korrine Sky, a medical student from Zimbabwe who had been studying in Ukraine since September.

She fled the country on Friday but, with the aid of two London-based friends, managed to raise more than £20,000 ($26,800) to help stranded Afro-Caribbean students.

“This situation we’re in is a life-or-death situation. We need to make sure that all the African students cross the border successfully and safely,” she said, speaking on Instagram Live from the Romanian side of the border on Sunday.

Around 500,000 refugees from Ukraine have so far crossed to neighboring European countries, the UN High Commissioner for Refugees, Filippo Grandi, said on Monday.