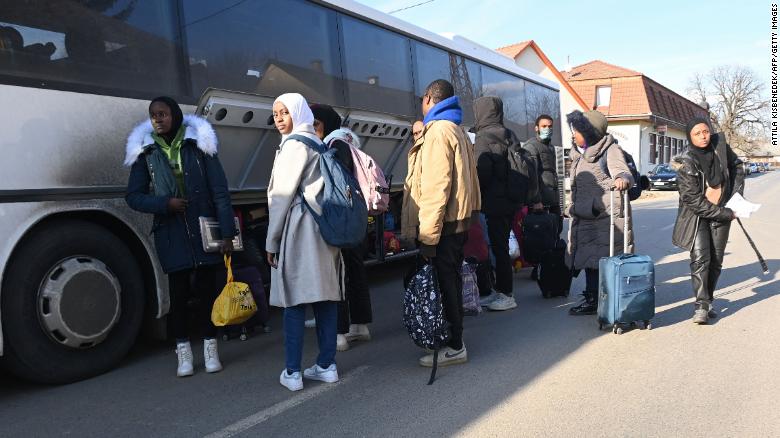 As the Russian invasion of Ukraine continues, foreign students attempting to leave the country say they are experiencing racist treatment by Ukrainian security forces and border officials.

One African medical student told CNN that she and other foreigners were ordered off the public transit bus at a checkpoint between Ukraine and Poland border.
They were told to stand aside as the bus drove off with only Ukrainian nationals on board, she says.
Rachel Onyegbule, a Nigerian first-year medical student in Lviv was left stranded at the border town of Shehyni, some 400 miles from Ukraine’s capital, Kyiv.

“More than 10 buses came and we were watching everyone leave. We thought after they took all the Ukrainians they would take us, but they told us we had to walk, that there were no more buses and told us to walk.”

“My body was numb from the cold and we haven’t slept in about 4 days now. Ukrainians have been prioritized over Africans — men and women — at every point. There’s no need for us to ask why. We know why. I just want to get home,” Onyegbule told CNN in a telephone call Sunday as she waited in line at the border to cross into Poland.
Onyegbule says she eventually got her exit document stamped on Monday morning around 4.30 a.m. local time.

Saakshi Ijantkar, a fourth-year medical student from India, also shared her ordeal with CNN Monday via a phone call from Lviv, western Ukraine.
“There are three checkposts we need to go through to get to the border. A lot of people are stranded there. They don’t allow Indians to go through.
CNN has been unable to confirm the identities or affiliations of the people who operated the checkpoints, but Ijantkar said they were all wearing uniforms.

They allow 30 Indians only after 500 Ukrainians get in. To get to this border you need to walk 4 to 5 kilometers from the first checkpoint to the second one. Ukrainians are given taxis and buses to travel, all other nationalities have to walk. They were very racist to Indians and other nationalities,'” the 22-year-old from Mumbai told CNN.
She added that she witnessed violence from the guards to the students waiting at the Ukrainian side of the Shehyni-Medyka border.

Ukrainian men aged between 18 and 60 are no longer allowed to leave the country, but that decree does not extend to men who are foreign nationals.
Ijantkar says she saw Indian men were left in queues for long hours along with other non-Ukrainian nationalities.

“They were very cruel. The second checkpoint was the worst. When they opened the gate for you to cross to the Ukrainian border, you stay between the Ukraine and Poland, the Ukrainian army don’t allow Indian men and boys to cross when you get there. They only allowed the Indian girls to get in. We had to literally cry and beg at their feet. After the Indian girls got in, the boys were beaten up. There was no reason for them to beat us with this cruelty,” Ijantkar said.

“I saw an Egyptian man standing at the front with his hands on the rails, and because of that one guard pushed him with so much force and the man hit the fence, which is covered in spikes, and he lost consciousness,” she said.

“We took him outside to give him CPR. They just didn’t care and they were beating the students, they didn’t give two hoots about us, only the Ukrainians,” she added.
CNN contacted the Ukrainian army in light of the allegations of violence, but did not immediately hear back.