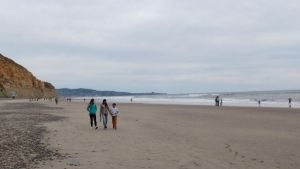 An area of low pressure over the western U.S. will progress southward into portions of the eastern Great Basin, bringing dry offshore flow and a weak Santa Ana wind event to San Diego County, the National Weather Service said.

This pattern will produce temperatures near to slightly below average each day with lovely fall-like crisp temperatures each night and early morning.

High temperatures on Thursday are predicted to be around 70 along the coast, lower 70s in the western valleys, lower 60s in the mountains and upper 70s in the deserts, according to the weather agency.

The marine layer is expected to be shallow, keeping clouds west of the mountains patchy each night.

The middle of next week has the potential for a changing weather pattern, where a trough from the north may bring in cooler weather and light showers across the region.